Toronto Waterfront Magazine (TWM) has taken a progressive role in tackling the issue of violence in our communities by creating the International Peace Festival (IPF) and “Film for Peace” (FFP) in 2018. This is an exciting opportunity for our city to address the escalation of violence in a creative way.

International Peace Festival (IPF) and Film for Peace (FFP) promotes peace through film, music, art exhibits, speakers, food and cultural exchange. This is an experiential, creative initiative that addresses the escalation of violence. The key objective of the festival is to raise awareness of the underlying contributing factors leading to violence, such as bullying, mental health, addictions, social isolation, poverty, rejections of minority groups, etc. with the hope of finding viable solutions to reduce violence.

On Sept 13, 2018, Toronto Waterfront Magazine announced the launch of IPF and FFP at the 3rd annual Waterfront Magazine TIFF Gala event at the Westin Harbour Castle hotel to address the issue of violence. Filmmakers were invited to submit a short film that is informative, inspiring, and entertaining.

1st Annual IPF and FFP was held on the International Peace Day, Sept 21, 2019, at the Artscape. Over 1100 film from around the world were submitted last year and top 30 films, selected by our judges, was showcased. Guests enjoyed engaging exhibits, workshops, panel discussion and cultural food as well as great music, dance, and theatrical performances.

SUNDAY, SEPT 20
8AM – 10AM ~ YOGA AND MEDITATION
10AM – 1PM ~ FINDING INNER PEACE Workshops and Panel Discussions

* IdealMe Enrichment Foundation (IMEF) promotes excellency and positive change through education, technology, and art. IMEF hold workshops for youth as well as seminars for parents, teachers, and professionals. Our members continue delivering lectures, seminars, and are invited as experts to panel discussions pertaining to mental health, education, self-development and more. (IdealMeFoundation.com)
** Dolce De Soleil is renowned for the wide-ranging and inspirational calibre of its music. Featuring presentations by choral groups, choirs, bands and soloists, Dolce De Soleil offers a delightful array of performances that soothe the soul and enliven the spirit. Many of these artists have won international music awards, and they have collectively contributed their talents to a variety of preeminent festivals and celebrations across the country.

FILM FOR PEACE FESTIVAL
the creative solution to ending violence in our community!
Filmforpeace.org

As an experiential filmmaking program, ‘Film for Peace’ (FFP) accepts participants of all ages. FFP started out as a proactive initiative to address the escalation of violence in our city, Toronto, but with violence being a global issue, and “overall, violence is among the leading cause of death worldwide for people aged 14 – 44 years, it is not surprising that the initiative has expanded globally and FFP receives over one thousand film submissions annually, many of which are from other countries.

to promote a new generation of outstanding young film

makers that bring the positive changes to local

Film for Peace video and short film creators focus on their vision in expressing what they think could combat such issues as drug abuse, mental health, bullying, social isolation, racism, poverty, especially with a focus on youth and what they are being faced with. Entrants will be judged on their ability to effectively communicate, through the medium of film, potential solutions to achieving sustainable peace as a community. Thirty films, over eleven categories, will be selected to be showcased at the FFP festival on September 18th to 20th.
Sabine Mondestin, a co-founder of Open World Toronto Film Festival, said last year, “When I heard about TWM initiative ‘Film for Peace’, it caught my attention. The issues of violence and the level of cruelties that we are witnessing among youth are overwhelming and striking. I was glad to know that this initiative addressing such issues has been formed in our city. As a founder of OWTFF, I am delighted and proud to support Waterfront Magazine’s “Film for Peace” Initiative”.
The partnership between ‘Film for Peace’ and other festivals will strengthen the impact of those platforms that create the new opportunities for young talents, and at the same time empower and educate youth about the self-growth, self management, leadership, team collaboration and filmmaking.

We value our partnerships with our corporate and individual sponsors and we are committed to delivering valuable benefits and a positive partnership experience to each of our sponsors. 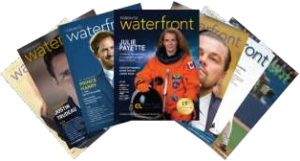 WATERFRONT MAGAZINE is distributed to people living and working in the Waterfront and Downtown area. Reaching over 100,000 readers with every issue, it is the only community-based magazine distributed directly to residents and businesses. The magazine appeals to an affluent, cosmopolitan and upscale audience.Launched in 2003, Waterfront Magazine has since grown into a multi-faceted media organization. It offers informed views and current opinions on local issues and events in the community. Our editorial content is highly relevant and entertaining.

Two Men Plant a Forest – Two men who travelled to the Ecuadorian rainforest to plant over 5k saplings.
Next Post: CEO Catches a Homeless Man Stealing Pizza… The Ending will SHOCK You