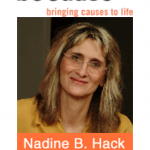 Her SRE™ work with scores of organizations has included The Coca Cola Company, which she advised on transforming its HIV policies and procedures in Africa in collaboration with governments and advocacy groups on the continent; Unilever, UNICEF and the government of India in creating a child nutrition initiative; Cisco Systems, on its partnership with UNDP in the creation of NetAid, a global anti-poverty initiative; Chevron Texaco’s partnership with AAI to develop education and job training programs; Omnicom Group, Hunt Alternatives and the Women’s Funding Network launching the global campaign Women Moving Millions on behalf of women and girls internationally; AOL/Time Warner and numerous partners on a global human rights campaign, Speak Truth to Power; Deutche Telecom, Volkswagen, Fujitsu Siemens and other companies to promote the UN at Expo 2000; Levi Strauss, MTV Networks International and PSI in co-producing the global launch of YouthAIDS targeting the generation most likely to become infected; among myriad others.

Hack has extensive experience with the United Nations, where she served as New York City Commissioner for the United Nations, Consular Corps and International Business, the city’s senior official liaison with the world’s largest international diplomatic and business communities. She has advised three UN Secretaries-General, heads of state including Philippines’ President Corazon Aquino, South Africa’s President Nelson Mandela and other senior government officials. Hack has served on official UN or national delegations and fact-finding missions globally, with a particular emphasis on southern Africa. She’s been a keynote speaker at myriad conferences and had numerous articles written about or published by her including in The New York Times, Boston Globe, USA Today, UN Chronicle and other major publications. Television, radio and internet interviews include NPR, FOX, MNN, UN Radio and TV. She’s listed on SheSource.org, an on-line database of international women experts in their fields, documented in an oral history archive of Women’s Activism and featured in a full-length documentary film, “Obama: The People’s President.” She designed and taught courses at NYU’s Wagner Graduate School of Public Service and at SNHU’s Graduate School of Community Economic Development, where she gave their 2009 International Program commencement speech.

The Honorable Nelson Mandela
“When I was in prison it was very good to know that I had powerful friends like Nadine Hack working on behalf of South Africa’s freedom. Now that South Africa is engaged in the arduous process of reconstruction and development, my colleagues and I regularly rely upon the perceptive guidance provided by Nadine. She continues to support our fledgling institutions in many ways, from bringing significant delegations to our country to creating vital support networks throughout the world.”

Janet Riccio, Executive Vice President, Omnicom Group of Companies
“Nadine B. Hack, beCause Global Consulting president, provided the strategic leadership that guided our complex process of developing powerful branding and message delivery for a client with multi-stakeholders holding wildly divergent views. We could not have done it without her.”

Ambassador Andrew Young, Chairman, Goodworks International
“Nadine Hack has an extraordinary network of people domestic and abroad who trust her judgment and follow her guidance. Her friends and acquaintances include heads of state, members of cabinets and parliaments, other senior government officials, as well as corporate and civic leaders.”

Ingrid Saunders Jones, Senior Vice President, Coca Cola
“The need for companies to work in partnership with viable nonprofit organizations and to support governmental initiatives has become ever more important. Nadine knows that relationships you create with other sectors can provide important values for your company including employee volunteerism and strategic community, national or global input in decisions affecting business.”

Huey Johnson, 2001 UNEP Sasakawa Environmental Prize Laureate
“I have relied on the visionary counsel of Nadine Hack for decades, since she first helped me in the 1970s formulate and implement many renewable resource concepts that still thrive today. These early cutting-edge initiatives and her ongoing insights clarified the principles and informed the blueprint for Global Green Plans worldwide. She can help others expand into the global arena.”

Richard Matzke, Vice Chairman, Chevron Texaco
“Nadine Hack and her beCause associates understand the importance of corporate social responsibility goals that companies seek to achieve. They are strategic in their approach and thorough in their implementation to help their clients distill and achieve objectives that are consistent with their core business model. It has always been a pleasure to work with Ms. Hack.”

Michael Schlein, President of International Franchise Management, Citigroup
“Early in my professional career, I learned so much about how to organize and run a meeting from Nadine Hack. She hired me to be the Executive Director of a committee she chaired. The co-chairs she recruited included Bob Rubin, Arthur Levitt and Roger Altman who later were in the US Cabinet. She masterfully led this group in a crisp weekly meeting that accomplished extraordinary results.”

Jerilyn Asher, Chairman, Rainmaker Consulting Group
“My years of experience as a corporate executive have taught me how critical it is for companies to make use of the best strategic thinkers to become positioned as leaders in their market. I know of no one more capable than Nadine Hack and beCause to help companies do this, particularly with innovative organizational change management and CRM (cause related marketing) initiatives.”