You are here: Home / Arts & Leisure / Media / Israeli Scientists Will Have Coronavirus COVID-19 Vaccine in a Few Weeks 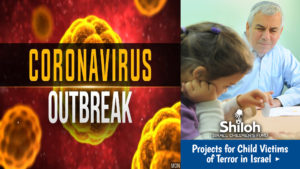 Israeli scientists say that they expect to have a Coronavirus Vaccine in just a few weeks. This is great news, especially since some health forecasters predict 60%of the world population will contract that virus that is at least 1% lethal, meaning about 50 million deaths, rivaling the 1918 outbreak of Spanish Flu.
Yet, despite this potential breakthrough, the silence is deafening from Ilhan Omar, Rashida Tlaib, and other leftists calling for the boycott of Israeli exports—presumably including the cure for COVID-19 Coronavirus.
Joining us in this discussion as David Rubin, former mayor of Shiloh, Israel.
Q&A:
1. This is very encouraging news. Can you tell us just how close Israel is to having the Coronavirus vaccine?
Answer: Israeli Science and Technology Minister Ofir Akunis was just quoted in The Jerusalem Post as saying the Coronavirus vaccine could be available in 90 days.
2. Which scientific group is working on the vaccine?
Answer: The Galilee Research Institute, otherwise known as MIGAL. For the past four years, their scientists have been working on a vaccine against infectious bronchitis virus (IBV) that causes a bronchial disease affecting poultry. Its effectiveness has been proven in preclinical trials at the Veterinary Institute.
3. Why is that relevant to the Coronavirus?
Answer: The MIGAL research revealed that the genetics of the poultry coronavirus are highly similar to the coronavirus found in humans, and that it uses the same infection mechanism, and therefore, it just needs to be adapted for humans.
4. Assuming all goes well, how long will the process take until the vaccine can be used?
Answer: According to Science Minister Akunis, it could be 6-8weeks until the vaccine is produced, then several weeks of testing, and after that, another few months to get legal clearance. However, attempts are being made to fast-track the process.
1. Is this vaccine an injection? We know there are many opponents of injectable vaccines.
Answer: No. It is an oral vaccine.
1. Now, for a sensitive question: Despite this potential breakthrough by Israeli scientists, the silence is deafening from politicians on the left side of the aisle, who often call for the boycott of Israel exports—presumably including the cure for COVID-19 Coronavirus. How can this be?
Answer: Hatred of Israel outweighs the desire to help their fellow humans—even if it means the possible death of millions of people. Sadly, it’s that clear cut.
Reference article from the Jerusalem Post:

MORE if time permits, on the March 2 Israeli elections:

1. Let’s move on to discussion about the March 2 historic elections in Israel. If not for the Coronavirus dominating world news, this election in Israel might be the lead story in world news. Can you summarize what’s at stake?
Answer: There have already been two deadlocked elections in the past year. Israel’s right-of-center Prime Minister Benjamin Netanyahu and left-of-center former Army Chief-of-Staff Benny Gantz. Each control a voting bloc – Left (Gantz) or Right (Netanyahu), but due to the deadlock and the controversial centrist Avigdor Lieberman, who so far has refused to join with either side, neither voting bloc has been able to put together a majority coalition, which is, after all, a pre-requisite for forming a government.
1. Can you explain to our viewers/listeners the difference between the Israeli form of government and the U.S. government?
Answer: Of course. Israel has a rather unwieldy parliamentary system with a whole bunch of smaller parties. It’s a system in which the leader of the most popular party must form a majority coalition by appealing to smaller parties that will join his coalition. Of the smaller parties, Lieberman’s was a ‘major minority’ and he is insisting on a government without religious parties, a so-called “government without God”.
1. What are Netanyahu’s options in cutting a deal with Lieberman?
Answer: He and Lieberman have had a very shaky relationship in the past and if he were to cut a deal with Lieberman, it would likely involve forcing a bold compromise between Lieberman and the religious parties.
2. What are likely options for governing coalitions? Couldn’t Lieberman kiss and makeup, cut a deal, and join Netanyahu?
Answer: It is possible. Despite Liberman’s uncompromising style of speaking, he has made many political compromises in the past.
5. Tell us about the Trump Deal of the Century and the land annexation and the agreement to help the Palestinians?
Answer: The map looks a bit like a Gerry mandered congressional district, and if a Palestinian state were to be created, it would be a serious security threat for Israelis who travel those roads. Having said that, the plan will not be accepted by the Palestinian Authority, because it demands that they stop paying salaries to the families of imprisoned terrorists, it demands that they accept Israel as the Jewish state, and it demands that they disarm. These are all reasonable demands to create a true atmosphere of peace, but they won’t accept it.
1. Tell us about your book, “Trump and the Jews” and the parts that deal with what we’re seeing play out in the Israeli election scene.
2. Where can people get a copy of your book?
Answer: They can go to Amazon.com and simply type in the words, “Trump and the Jews”.

Bio: David Rubin, former Mayor of Shiloh Israel, is the author of the book, “Trump and the Jews”. Rubin is the founder and president of Shiloh Israel Children’s Fund, established after he and his then three-year-old son were wounded in a terror attack. He can be found at www.DavidRubinIsrael.com or at http://www.ShilohIsraelChildren.org