John Halsey is a 13th Generation Farmer in Southampton, New York, Click for Video and Podcast…

You are here: Home / All We Need Is Love / Children and Parents / John Halsey is a 13th Generation Farmer in Southampton, New York, Click for Video and Podcast… 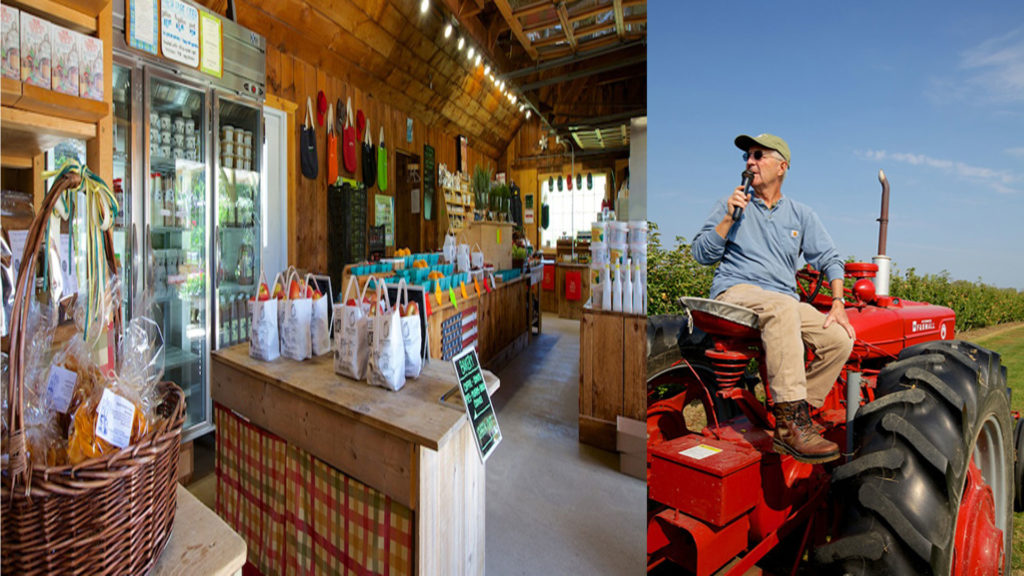 The family still runs the farm and sells some of their produce at the www.milk-pail.com in Southampton, NY. Apples have been a staple in the American diet since the settlers first landed at Plymouth Rock. They brought apple seeds, saplings and cuttings with them to establish orchards in the New World. In the 1640s the Halsey family began farming in the Water Mill and Bridgehampton area known as Mecox, named for beautiful Mecox Bay. Today, the owners and founders of The Milk Pail Fresh Market & U-Pick, John and Evelyn Halsey, along with their daughters Amy and Jennifer, are the 11th and 12th generation of Halseys carrying on a farming tradition that began more than 350 years ago. Their family farm and orchard is located on the shores of the same Mecox Bay that attracted the first Halsey settlers.

The Milk Pail Fresh Market began more than 30 years ago. John learned about farming growing up on his father’s Mecox potato farm while Evelyn got her first taste for apple growing from her parents’ apple orchard in Vermont. In 1969 they began a tiny retail store to market their vegetables and sell the milk produced by their cows. They named the store The Milk Pail, since milk was their main product at the time. The following spring they planted their apple orchard and have been perfecting and adding award-winning varieties ever since.
A Farm Family Tradition That Began in the 1640s
http://www.milk-pail.com/images/photo_about_2.jpg
http://www.milk-pail.com/images/photo_about.jpg
Today both Amy and Jennifer continue their family farm tradition in the 21st century.
Amy earned a horticulture and plant science Bachelor’s degree from SUNY Cobleskill in 1994. Her training included an internship in Holland and today she runs her own state-of-the-art greenhouse operation. She grows unique, unusual, & old-favorite plants available in mid May through August; beautiful hardy mum throughout the fall; and amaryllis for the winter holidays. Amy also helps design gardens and custom designs planters.
Jennifer earned a Bachelor of Science degree from Cornell University in 1997, specializing in pomology, the study of growing and marketing fruit. Today Jennifer harvest juicy peaches from her own 1200 peach trees planted at the family farm. Harvest begins in mid July through September. In January 2000 Jennifer was named New York Young Farmer of the Year by the New York State Farm Bureau and proudly represented her state at the national finals held in Texas.
The Halsey family invites you to make their family tradition a part of your family tradition. Visit the Milk Pail Country Store, U-Pick Orchard and enjoy Amy’s Flowers and Jennifer’s juicy peaches.