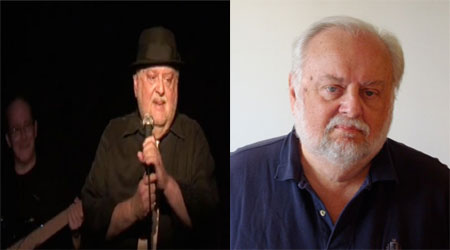 The music that came out of the 1960s is still with us today, and as popular as ever. However, these days you’re more likely to hear a song by the Byrds or the Mamas and the Papas as lush string arrangements in an elevator or at the bank. Here’s your chance to hear this iconic music as it was meant to be heard: live, loud, and rocking.

John Koprowski takes us on a musical journey through the days that created the ’60s sound: the campus free speech movement, the Vietnam war and anti-war protests, civil rights marches, Ken Kesey and Timothy Leary, Haight-Ashbury and the Summer of Love, Fillmore East and West, the Beatles and the British invasion, Dylan going electric, Altamont, Monterey, and Woodstock.

Setting the scene for this turbulent era are songs by the following artists: The Beatles, Bob Dylan, Simon and Garfunkel, Jimi Hendrix, The Byrds, The Grateful Dead, Creedence Clearwater Revival, and others.

John Koprowski, a rock and roll historian as well as a performer, offers these powerful songs in the proper setting — with a five piece band and three backup singers under the direction of Ms. Tracy Stark. The entire production is staged by Mr. Eric Michael Gillett.

John Koprowski is a multifaceted artist who, after a successful career in finance, chose to change directions and pursue his artistic dreams. To review his impressive work on stage and in film, please see his web site at www.johnkoprowski.com.

This is John’s fifth cabaret show, the last three of which have been under the direction of Eric Michael Gillett, and all of which deal with his passion for rock and roll and its history.

Also multitalented is Eric Michael Gillett. See www.ericmichaelgillett.com for his impressive accomplishments in the entertainment industry. This multi-award-winner is presently at the Laurie Beechman Theatre each Friday at 7pm through May 9, 2012, with “I Won’t Sing a Sondheim Song…or Will I?”