in ringing bells at the moment of the Hiroshima bombing
for Peace & A World Without War
Wednesday, August 5 th, 2015 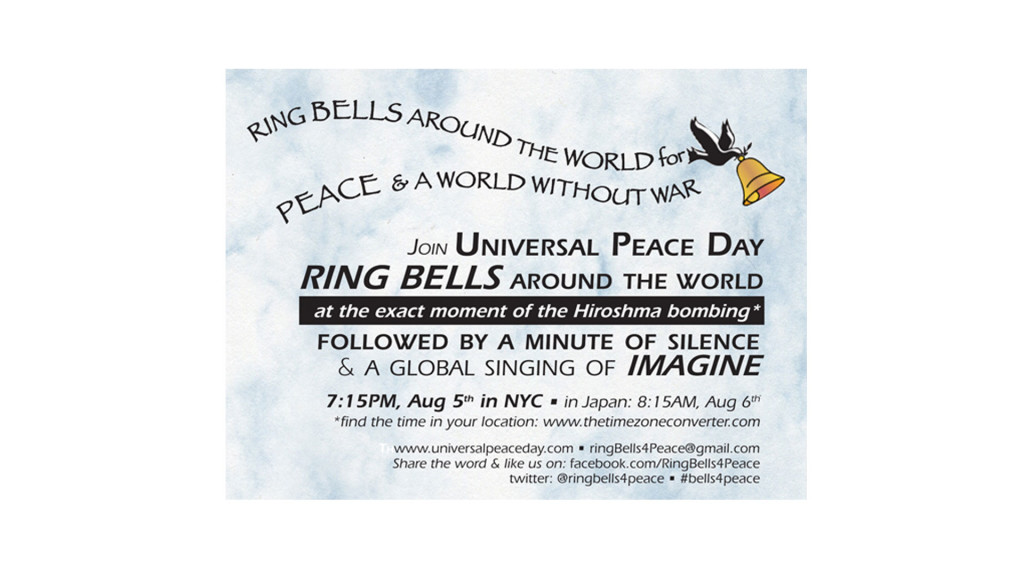 NEW YORK – On Wednesday, August 5th, join Universal Peace Day in a global event of ringing bells around the world for Peace and A World Without War at Strawberry Fields – in Central Park (enter West 72nd Street).The gathering is to commemorate the 70th anniversary of the dropping of the first atomic bomb on Hiroshima.

At 6:30pm, the public is invited share in Visions of Peace with poetry, dance and music. Artists from around the world will share their visions of Peace. This is a reunion bringing together performers, who have appeared at past UNIVERSAL PEACE DAY events over the last 31 years.

At 7:15pm (NYC time), the exact moment of the Hiroshima bombing (8:15AM August 6 in Japan), there will be a Peace Bell Ringing ceremony –followed by a minute of prayers for peace and then singing of John Lennon’s Imagine. All are invited to ring bells

Universal Peace Day brings people around the world together to share their vision of peace and to transform a remembrance of horror into a rededication of life. The legacy of Universal Peace Day, sponsored by Art For The People, began in 1984 in Central Park, where Peter Yarrow of Peter, Paul and Mary performed before a candle lighting ceremony at the moment of the Hiroshima bombing. Over the years, Universal Peace Day events have taken place in numerous NYC locations including Dag Hammersjkold Plaza, Riverside Park, Battery Park, The Riverside Church, Church Center of the UN, Church of St. Paul and St. Andrew, and the NY Buddhist Church.

The Heir, by Kiera Cass, author of ‘The Selection’ series
Next Post: What’s Good News for Kiera Cass?