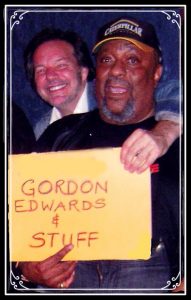 and other special guests!

Hopefully, if we are lucky again this year …
Maybe?
Maxine Brown
Beverly Crosby
(One can only wish)

Gordon Edwards Annual Pisces Party!
(but you don’t need to be a Pisces to enjoy the groove)
Don’t Miss It!

Tickets are $20 and includes food!

There will be a vegetarian option as well.

We will be selling the new version of the venerable collectable STUFF T-Shirts.
Many musicians and fans still covet their original ones from the 1970’s!
Additionally. we will have for sale some limited edition signed copies of our latest Gordon Edwards and Stuff recording. 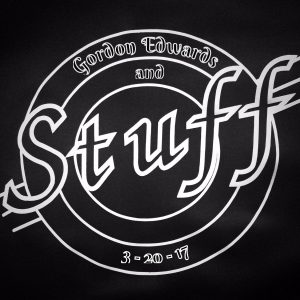 Recorded live at the Triad Theater on March 20, 2017,
it is a 3 song EP with  the master himself, Gordon Edwards on bass
and features the following members of STUFF:

It was recorded, mixed, and mastered by Ernie Indradat

As for the show, this evening will undoubtably be a fun and soulful set of music for all to enjoy. Gordon Edwards is a musical legend and a national treasure with a musical pedigree that few can lay claim to,
and one that most musicians could only dream of.
Having laid down his soulful bass on tracks for luminaries such as Aretha Franklin, James Brown, John Lennon, Paul Simon, Joe Cocker, Etta James, Carly Simon, the list goes on and on, Gordon is also a founding member of the most soulful and funky rhythm section that was ever assembled. I consider it a highlight in my career to have the chance to make music with Gordon and to have had same opportunity to do so with the late, great Cornell DuPree; both were cornerstones for the band known as STUFF along with Chris Parker, Steve Gadd, Cornell DuPree, Richard Tee, Eric Gale and other luminaries.
None of this would happen if it wasn’t for the tireless, thankless, diligent work of guitar wizard Mick Gaffney who’s stellar guitar playing is matched only by his ‘menschitude’. The same (or perhaps much more – and I think Mick would agree) can be said about the wonderful Bridget St.John. Lastly, a shout out and special thanks to all the other Stuffies that are part of this extended Stuff family including the late great Jimmy Allen Smith, Frank Fumosa, and all the other past legends of the Stuff band and legacy living or passed.
I’m beyond proud to be included in the elite Stuff club.
Cheers, 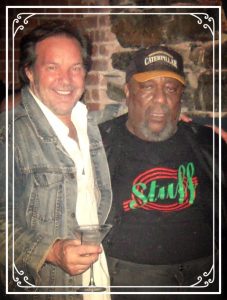