You are here: Home / All We Need Is Love / Justin Churchman: A Huggable Hero & CNN Heroes “Young Wonder” 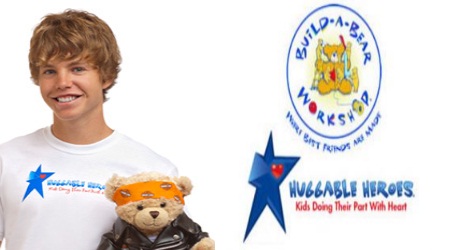 Justin’s Story:    Justin Churchman, 18 years old from El Paso, TX is helping change lives in Juarez, Mexico, one house at a time. Through Casas por Cristo, Justin was able to accomplish a remarkable goal: building 18 homes for homeless people by his 18th birthday. His efforts include raising $48,000 for building materials by making presentations to organizations and contacting business owners. He also has recruited 75 volunteers to assist in this effort. Justin is a 2011 Huggable Hero & CNN Heroes “Young Wonder”. Millions of young people want to change the world. Justin is actually doing it.

What:    In celebration of Youth Leadership month, Justin will tell his story and help inspire kids to accomplish their own amazing feats.  Also, he will discuss how kids can be recognized for their good deeds by becoming a 2012 Huggable Hero.

Huggable Heroes:    Since 2004, more than 100 exceptional young people have been recognized as Build-A-Bear Workshop Huggable Heroes®. Our annual Huggable Heroes program supports thousands of causes and champions un-bear-lievable efforts of young people who are making a difference. This year, we will add 10 more amazing kids to our growing roster of Huggable Heroes. If you know any young leaders, ages 8 to 18 from the U.S., Puerto Rico or Canada, who provides extraordinary service in their communities or around the world, nominate them today!

Ten winners will receive $10,000 ($7,500 educational scholarship and $2,500 charity donation), plus a trip to St. Louis to be recognized.  They also will be featured in the Build-A-Bear Workshop 2013 Huggable Heroes calendar.  Nomination forms are available now through February 27th at your local Build-A-Bear Workshop store or online at http://www.lovehugssmiles.com/HuggableHeroes.aspx.

ST. LOUIS (February 2012) –Build-A-Bear Workshop® launches its ninth annual search for Huggable Heroes®.  This group will be made up of inspiring young leaders who have a commitment to serve, help others, and make a difference in their community. Kids, ages eight to 18, can be nominated through February 27 by visiting www.buildabear.com/huggableheroes or picking up an entry form at Build-A-Bear Workshop stores in the United States, Puerto Rico, and Canada.

Since Build-A-Bear Workshop first launched the program in 2004, more than 100 Huggable Heroes have been recognized, and have collectively been awarded nearly one million dollars in donations and scholarship money. This year, Build-A-Bear Workshop and its foundation will contribute $100,000 more to the educational development and community-minded efforts of young people who do their part with heart.

Entries will be narrowed down to 80 semifinalists in March and to 30 finalists in May. In June, ten noteworthy young people will be selected and named 2012 Build-A-Bear Workshop Huggable Heroes.

“Our Huggable Heroes provide us with hope and inspiration year after year through their efforts to help others,” said Maxine Clark, Build-A-Bear Workshop founder and chief executive bear. “It always amazes me to see how creative and passionate our youth are and how the Huggable Heroes use these skills to help improve the world around us. It is our mission at Build-A-Bear Workshop to make sure these kids are recognized and awarded for their efforts. We are investing in young leaders today to be future leaders tomorrow.”

To read the stories about the Build-A-Bear Workshop Huggable Heroes and learn more about the program, visit http://heroes.lovehugssmiles.com/huggableheroes.aspx

TRADEMARKS
We would like to thank you for your interest in covering our business. As you write your story, we would ask that you use our full name: Build-A-Bear Workshop® and that when referencing the process of making stuffed animals you use the word “make” not “build.” Build-A-Bear Workshop is our well-known trade name and our registered trademark of Build-A Bear Retail Management, Inc. Build-A-Bear Workshop® should only be used in capital letters to refer to our products and services and should not be used as a verb.