Last Call to the World by Zelensky!

You are here: Home / Good News To Go / Last Call to the World by Zelensky!

Listen to “Last Call to the World by Zelensky!” on Spreaker.

Listen to “Last Call to the World by Zelensky! part 2” on Spreaker. 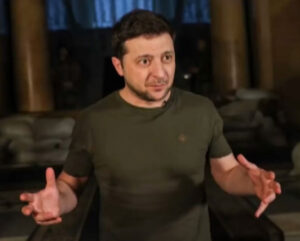 Last Call to the World by Zelensky!

I wish you health, my dear country. The 7th day of the terrible war began. Nothing matters anymore except victory and peace. Except for the lives of our people, nothing matters except Ukraine. For anyone who knows history, some place Russia hit yesterday is Kyiv, a special piece of Europe. It is a place of prayer where the old Kyiv cemeteries commemorate the 100,000 people killed by the Nazis. What kind of person do we have to be to make such a place a target for missiles? You are killing Holocaust victims for the 2nd time. In Soviet times, they built a television center, a sports complex, a park on the bones of the victims of the genocide. To erase the true history of Babi Yar. But why was it bombed? This is inhumane. Now I call to all the Jews of the world: Do you not see what is happening? millions around the world

It is very important that the Jew does not remain silent now. Nazism is born in silence. So what is the result for Russia? The flag of this state will no longer be seen at sports tournaments. The modern world culture will now be closed. Russian goods are being taken off the shelves around the world. Russian banks have been cut off from the global system. Russian citizens lose their savings, all hope. Russian mothers lose their children in a country completely foreign to them. In the 6-day war, about 6 thousand Russian soldiers died. Unless you count the enemy’s losses last night. Exactly 6,000, why? To get Ukraine? This is impossible. Ukrainians, my dears. Rockets, artillery last night

Their shots continued to hit our cities with machine guns. Residential areas were hit. Mariupol, Kharkov, Kyiv, Jitomir and other cities and villages of Ukraine were hit.

We barely slept 7 nights. The time will come when we can sleep, but after this war. After victory. With all your loved ones I ask you to take care. Take care of your siblings. I admire you Ukraine. The whole world admires you, from Hollywood stars to politicians. Today, you Ukrainians are the symbol of invincibility. Victory will belong to Ukraine.