Ahead of a major climate summit in Glasgow, many countries have vowed to do more to curb their emissions. But those plans still put the world on path for dangerous warming. 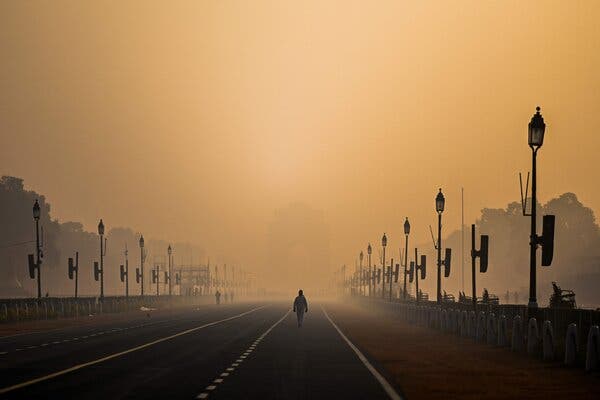 Smog in New Delhi in January. The U.N. asked for new, more ambitious national plans to curb emissions through 2030, though some countries, such as India, have not submitted new pledges.Credit…Jewel Samad/Agence France-Presse — Getty Images

WASHINGTON — The latest plans by the nations of the world to tackle climate change over the next decade fall far short of what’s needed to avert a dangerous rise in global temperatures, according to a United Nations report released Tuesday.

In the run-up to a major U.N. climate summit in Glasgow next week, a number of governments have updated their pledges under the Paris climate agreement to do more to curb their planet-warming emissions between now and 2030. They include Argentina, Britain, Canada, the European Union, South Africa and the United States.

But those new pledges, the report found, would collectively produce just one-seventh of the additional emissions cuts needed this decade to help limit total global warming to 1.5 degrees Celsius, or 2.7 degrees Fahrenheit, above preindustrial levels. That’s the threshold beyond which scientists say the dangers of global warming — such as deadly heat waves, water shortages, crop failures and ecosystem collapse — grow immensely. (The world has already warmed 1.1 degrees Celsius since preindustrial times.)

And that assumes every country actually follows through on its promises. The report found that many governments still haven’t put in place policies or laws to achieve their stated near-term goals.

“The world has to wake up to the imminent peril we face as a species,” Inger Andersen, the executive director of the United Nations Environment Program, said in a statement. “To stand a chance of limiting global warming to 1.5 degrees Celsius, we have eight years to almost halve greenhouse gas emissions: eight years to make the plans, put in place the policies, implement them and ultimately deliver the cuts. The clock is ticking loudly.”

The report estimates that even if countries achieve their newest round of near-term climate promises, known as Nationally Determined Contributions, the world would be on track to warm roughly 2.7 degrees Celsius by 2100, compared with preindustrial levels. That broadly aligns with what outside analyses have found.

That much warming would drastically increase the risk of heat waves, droughts, flooding and wildfires across the globe in the years to come, scientists have warned. The United Nations Secretary General António Guterres recently called such an outcome “catastrophic.”

In Glasgow, world leaders are expected to discuss accelerating efforts to tackle climate change. But the latest analysis suggests that progress so far has been uneven.

In 2015, nearly 200 nations signed the Paris climate agreement, which for the first time required every country to submit a plan for curbing its planet-warming emissions. Countries were free to set their own goals, and the initial round of pledges was vastly inadequate to achieve the agreement’s stated goal of keeping global warming “well below” 2 degrees and potentially as low as 1.5 degrees.

The treaty’s architects hoped that, over time, nations would strengthen their climate pledges as momentum for action grew. Ahead of Glasgow, the United Nations asked for a fresh round of more ambitious national plans that stretch out to at least 2030.

Some countries have offered to do more. President Biden, for instance, pledged that the United States would cut its greenhouse gas emissions 50 percent below 2005 levels by 2030, roughly double its previous goal. Britain, Canada, Japan and the European Union have also vowed to cut emissions more deeply over this decade.

But other major emitters, including India, Turkey and Saudi Arabia have not submitted new short-term pledges as of yet. And the report found that some of the updated pledges, such as those from Russia or Australia, were unlikely to lead to any actual emissions reductions between now and 2030.

China, the world’s largest emitter of greenhouse gases, remains a wild card. Although the country has not yet officially updated its Paris agreement pledge, President Xi Jinping has said that China’s emissions could peak before its previous target of 2030, while the country plans to accelerate its development of renewable and nuclear power.

If those targets are met, the U.N. report found, that could nudge down expected future emissions further, though the world would remain sharply off track from its Paris agreement goals. Environmentalists have called on China to do far more to rein in its appetite for coal, the dirtiest of all fossil fuels.

The new report also warns that even these new climate pledges are only as good as the policies that back them up. That is still a major question mark.

The European Union, for instance, has proposed sweeping new climate legislation — including stricter caps on industrial emissions, new targets for electric vehicles and a border tax on carbon-intensive imports — to achieve its goal of slashing emissions 55 percent below 1990 levels by 2030. But those proposals still need approval from all 27 member states, and many remain contentious with industry groups.

In the United States, the Biden administration is still struggling to clarify exactly how it will meet its pledge, since major climate legislation has not been approved by Congress. One recent analysis found that the country might be able to meet its target with a combination of generous tax incentives for wind, solar and other clean energy, tough regulations to restrict pollution from power plants and automobile tailpipes, and a slew of climate laws enacted by states. But none of those actions are yet assured.

On top of that, most countries have largely squandered the chance for a “green recovery” in the wake of the coronavirus pandemic, the report said. While governments spent more than $16 trillion on stimulus measures over the past year, they largely focused on reviving the traditional fossil-fuel dependent parts of their economies as quickly as possible, with less than one-fifth of recovery funds used to promote low-carbon alternatives. As a result, global emissions are expected to rebound sharply this year after declining in 2020.

The new U.N. report also noted that more than 50 countries have now adopted formal goals to reach “net zero” emissions, which is essentially a promise to stop adding greenhouse gases to the atmosphere by a certain date. The United States has vowed to get to net zero by 2050. China says it will aspire to do so by 2060. This week, Saudi Arabia unveiled a net zero goal.

In theory, those goals could have a powerful effect. The report estimates that if countries all followed through, the world could potentially limit global warming to around 2.2 degrees Celsius by 2100.

But it’s unclear how plausible these goals actually are. Many net zero pledges remain vague, the report notes, and they are often inconsistent with the slow pace of emission cuts that many nations are planning over the next decade.

“There is an urgent need to back these pledges up with near-term targets and actions that give confidence that net zero emissions can ultimately be achieved,” the report said.

The report offers several suggestions for how to close the “emissions gap” — the gulf between current plans and the actions needed to avoid a sharp rise in temperatures. For instance, countries could do far more to cut emissions of methane, a potent greenhouse gas that often leaks out of oil and gas facilities and is created by livestock production and landfills. Much of this methane could be captured or reduced at low cost, the report notes, such as through repairing pipeline leaks or reducing food waste.

Brad Plumer is a climate reporter specializing in policy and technology efforts to cut carbon dioxide emissions. At The Times, he has also covered international climate talks and the changing energy landscape in the United States. @bradplumer

The Best Action Movie, Man/Womans Best Friend..a Dog
Next Post: How to Map a Fly Brain in 20 Million Easy Steps