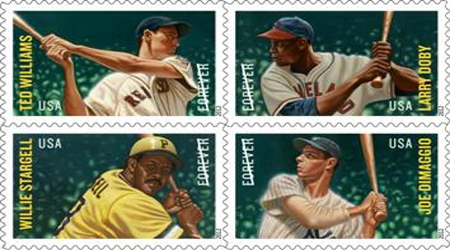 Four of Major League Baseball’s most revered Hall of Famers return to Cooperstown, NY, to a stamping ovation July 20 at the National Baseball Hall of Fame and Museum in the form of postage where they will be immortalized on 45-cent First-Class Forever stamps.

The First-Day-of-Issue Major League Baseball All-Stars stamps dedication ceremony is taking place at 10 a.m. at the Museum that morning as part of the opening day festivities for the four-day Hall of Fame Weekend celebration in Cooperstown. Available nationwide that day, the stamps can also be purchased at the Museum and the Cooperstown Post Office.

Appearing on the Major League Baseball All-Stars sheet of 20 stamps will be Joe DiMaggio of the New York Yankees; Larry Doby of the Cleveland Indians; Willie Stargell of the Pittsburgh Pirates; and Ted Williams of the Boston Red Sox.

“Some of America’s favorite pastimes come together with these stamps,” said U.S. Postal Service Stamp Services Manager Stephen Kearney. “Writing letters, collecting stamps, and, of course, playing and watching baseball are all important elements of our Nation’s culture and history. We are honored to be able to commemorate four of baseball’s most important players. Fans of these Hall of Famers and their teams will enjoy rooting for them once again by using and collecting these cool stamps.”

The stamps were designed by artist-illustrator Kadir Nelson of Los Angeles and are based on historic photographs. Phil Jordan of Falls Church, VA, served as art director.

Joe DiMaggio (1914-1999), nicknamed “the Yankee Clipper,” is best known for his unmatched 56-game hitting streak in 1941. Those who saw him play also admired his skill and grace as a fielder and base runner.

The son of an immigrant fisherman, Joe DiMaggio grew up in the largely Italian North Beach area of San Francisco. He and two of his major-league-bound brothers played on the city’s sandlot baseball fields. He dropped out of high school to become a teammate of his older brother Vince on the San Francisco Seals of the Pacific Coast League. DiMaggio soon attracted the attention of the New York Yankees, who gave up five players and $25,000 for him.

DiMaggio joined the Yankees in 1936. In 1939, he hit .381 to lead the league in batting and won the first of his three Most Valuable Player awards. In his first four years with the Yankees, the team won four straight World Series titles. He led the team to another World Series victory during the legendary 1941 season of “The Streak,” a season also remembered for the stellar .406 batting average achieved by Ted Williams of the Boston Red Sox. A less well-known statistic is DiMaggio’s incredible feat that year of striking out a mere 13 times in 541 at bats.

During World War II, DiMaggio missed three full seasons while serving in the Army. When he returned in 1946, he helped the Yankees claim four more World Series titles during his six remaining seasons. His best postwar season was 1948, when he batted .320 and hit a league-leading 39 homers with 155 RBI. During his 13-year career with the Yankees, he led them to 10 pennants and nine World Series titles and was a perennial All-Star. He became the “face of the Yankees” as Babe Ruth and Lou Gehrig had been before him and Mickey Mantle would be later.

DiMaggio was inducted into the Baseball Hall of Fame in 1955. During baseball’s centenary celebration in 1969, he was voted the sport’s greatest living player. He died on March 8, 1999.

Larry Doby (1923-2003) was the first African-American to play on an American League baseball team, joining the Cleveland Indians July 5, 1947. For integrating the league just 11 weeks after Jackie Robinson broke the color barrier in the National League, Doby is recognized as a civil rights pioneer. Known as a man of quiet dignity and courage who endured isolation, discrimination, and countless indignities, Doby helped pave the way for racial progress in America’s national pastime.

Doby was born in Camden, SC, and raised there mainly by his maternal grandmother while his mother made a living as a domestic worker in Paterson, NJ. He eventually joined his mother in Paterson and attended Eastside High School, where he earned 11 varsity letters in several different sports. Just before graduating, he began his professional baseball career with the Newark Eagles of the Negro National League. After serving in the U.S. Navy as a physical training instructor during World War II, Doby returned to the Eagles in 1946. That year he helped them defeat Satchel Paige and the Kansas City Monarchs in the Negro World Series championship. The following year he was batting well over .400 at midseason when Bill Veeck of the Cleveland Indians purchased his contract and brought him to the majors.

Doby’s white teammates gave him a chilly reception and he spent most of his first season on the bench. But in 1948 Doby hit .301 for the season and helped Cleveland win the pennant. During game four of the World Series against the Boston Braves, he became the first African-American player to hit a home run in a Major League Baseball World Series, which Cleveland won.

The next year Doby was elected to the American League All-Star team, which he made for each of the next six years. In 1950, Sporting News named him the best center fielder in baseball, ahead of Joe DiMaggio. Doby led the league in home runs and runs scored in 1952. Two years later, he again led the league in home runs, helping the Indians reach the World Series. In 1955, Doby set an American League record for an outfielder of 164 consecutive errorless games.

When his playing days were over, Doby coached for the Montreal Expos, the Cleveland Indians, and the Chicago White Sox. In 1978, he was hired as manager of the White Sox, making him the second African-American to manage a Major League Baseball team.

Willie Stargell (1940-2001) is perhaps best remembered for powering the 1979 Pittsburgh Pirates to a World Series title. Standing 6-foot 2-inches and weighing some 225 pounds late in his career, Stargell twice led the National League in home runs (48 in 1971 and 44 in 1973), and was famous for smashing baseballs out of stadiums. At one point, he held the record for hitting the longest homers in half the National League ballparks. The left-handed slugger wound up his career with 475 home runs.

Stargell was born in Earlsboro, OK. During his teens, he lived in a housing project in Alameda, CA, where he began playing organized baseball. In the late 1950s, he overcame racial intimidation while playing on some of the Pirates’ minor league farm teams in the South. Called up to the majors in 1962, he played 21 seasons, all for Pittsburgh.

During the 1970s, the Pirates won six of 10 divisional titles. After Roberto Clemente died in a plane crash in 1972, Stargell became the team leader. He handed out “Stargell Stars” to teammates for outstanding play and promoted team harmony, showing special talent for bridging gaps between white, black and Latino players. Nicknamed “Pops,” he instigated the adoption of the Sister Sledge disco hit “We Are Family” as the unofficial anthem for the ’79 Pirates team. That season he tied for National League Most Valuable Player, then garnered MVP honors in both the National League Championship Series and the Pirates’ upset win over the Baltimore Orioles in the World Series.

Stargell received many honors after his playing days ended. In 1983, he was asked to recite the words of Martin Luther King Jr. in a performance at Carnegie Hall by the Eastman Philharmonia. In 1988, in his first year of eligibility, the seven-time National League All-Star was elected to the Baseball Hall of Fame, earning the respect and admiration of his peers. Hall of Famer Joe Morgan remembered, “When I played, there were 600 baseball players and 599 of them loved Willie Stargell. He’s the only guy I could have said that about.”

Stargell coached for the Pirates in the 1980s and returned in 1997 as an assistant to Pittsburgh’s general manager, a position he held until his death in 2001. The Pirates built a 12-foot tall statue of Stargell outside the new PNC baseball park, which opened for a new season the day he died.

Born and raised in San Diego, CA, Williams hit .583 for the city’s Hoover High during his junior year. While still in high school, he signed to play for the San Diego Padres of the Pacific Coast League. After one season, at age 19 he signed with the Red Sox. At the team’s minor-league training camp, Rogers Hornsby taught Williams to study pitchers and to swing only at pitches in the strike zone, an approach that helped him win a Triple Crown with the Minneapolis Millers in 1938.

In 1939, his rookie year at Boston, the slender 6-foot-3 Williams, nicknamed “the Kid,” led the American League with 145 RBI. In the remarkable 1941 season, which included Joe DiMaggio’s record 56-game hitting streak, Williams refused his manager’s offer to sit out a season-ending double-header to protect his .400 average, instead cracking six hits to finish at .406. The following year Williams won the American League Triple Crown with a .356 batting average, 36 home runs and 137 RBI.

During World War II, while in the prime of his career, Williams enlisted in the Navy and began a flight training program after the 1942 season. He earned his wings as a second lieutenant in the Marines and became a flight instructor. He missed three full seasons of baseball during the war. He also missed most of two seasons in 1952 and 1953 while flying combat missions during the Korean War.

Despite the interruptions to his career, Williams managed to win six American League batting titles and four home-run titles, even though Boston’s Fenway Park was difficult for left-handed power hitters like Williams. He also was voted the American League’s Most Valuable Player twice. In 1947, his second season after returning from World War II, he won his second Triple Crown. In 1957, at age 39, he hit .388 and became the oldest player in the history of the majors to win a batting championship; he then led the league in batting again the next year at age 40. He even batted a more than respectable .316 his final season, in 1960, at age 42.

Williams was elected to the Baseball Hall of Fame in 1966. In 1969, he became manager of the Washington Senators and was named American League Manager of the Year. After four years, he retired from managing and moved to Florida to pursue a lifelong passion for fishing.

In his autobiography My Turn at Bat, Williams said that everyone has to have a goal, and his from the outset was to have people say, “There goes the greatest hitter who ever lived.”

Customers may view the Major League Baseball Forever stamps as well as many of this year’s other stamps on Facebook at facebook.com/USPSStamps, through Twitter@USPSstamps or on the website Beyond the Perf at beyondtheperf.com/2012-preview. Beyond the Perf is the Postal Service’s online site for background on upcoming stamp subjects, first-day-of-issue events and other philatelic news.