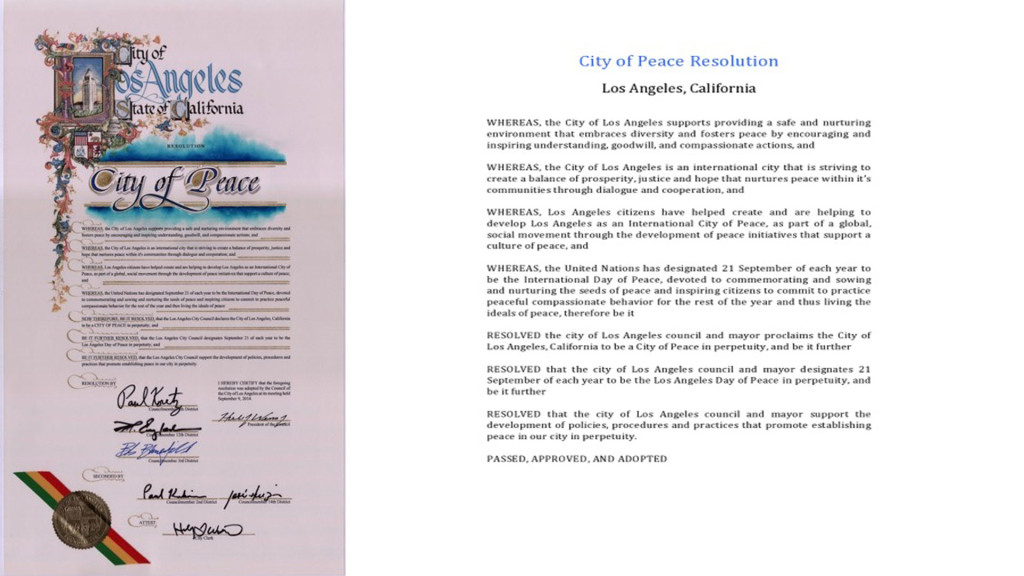 In a show of bipartisan support, the Los Angeles City Council adopted a resolution that officially recognizes the United Nations International Day of Peace and become an International City of Peace.

On September 27th, 2014, the document was presented to Scotty Bruer the driving force behind this initiative.  This historic resolution supports a vision for a safe and nurturing environment that embraces diversity and fosters peace in Los Angeles.

Scotty Bruer, founder of PeaceNow.com and other esteemed Los Angeles citizens drafted the resolution.  “Los Angeles is striving to create an environment of prosperity, justice and hope that nurtures peace and, with the adoption of this resolution, Los Angeles can demonstrate to the world how a great international city leads by peaceful example,” says Bruer.

This resolution supports the development of policies, procedures and practices that promote peace in perpetuity.  The resolution also states, “The United Nations has designated 21 September of each year to be the international Day of Peace, devoted to commemorating and sowing and nurturing the seeds of peace and inspiring citizens to commit to practice peaceful, compassionate behavior for the rest of the year and thus living the ideals of peace.”

“We hope the tenants of this resolution establishes a new global identity for the City of Angels,” concluded Bruer.