Making the Case for Capitalism: Panel, Keynote and Book Signing 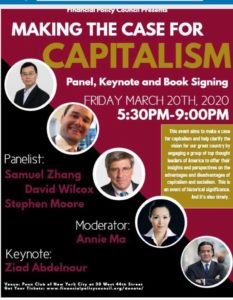 Under President Trump the United States has without a doubt seen a resurgence and renaissance in all aspects of our society, with stock markets breaking record highs, over 7 million new jobs created and millions of people off food stamps…But to our liberals in Hollywood, in Ivy League campuses and news rooms and studios of the mainstream media companies, as well as many politicians in our city halls, state capitals and the Washington DC beltway, socialism is more appealing than ever, leading to the national disgraces in places like San Francisco and New York City and witnessing the masses of brainwashed young generations enamored by the prowess and beauty of socialist and communist ideas and achievements.

America is at a crossroads.

Making the Case for Capitalism: Panel, Keynote and Book Signing, aims to make a case for capitalism and help clarify the vision for our great country by engaging a group of top thought leaders of America to offer their insights and perspectives on the advantages and disadvantages of capitalism and socialism. This is an event of historical significance. And it’s also timely.

TOPIC: Making the Case for Capitalism: Panel, Keynote and Book Signing
DATE: Friday, March 20, 2020
TIME: 5:30pm to 9:00pm
LOCATION: The Penn Club of New York City at 30 West 44th Street
Keynote Speaker:
Ziad K. Abdelnour is Founder, President & CEO of Blackhawk Partners, Inc. a private “family office” in the business of originating, structuring & acting as equity investor in strategic corporate investments and co-Founder of Aeros-Blackhawk Partners; a trading platform focusing on the financing of real estate and project finance properties throughout the US.

Founder & Chairman of the Board of the Financial Policy Council ; a 501 (c) (3) non-profit organization designed to give its select group of supporters the opportunity to have direct face-to-face dialogue with the nation’s quintessential power brokers and policymakers

A member of TIGER 21, a peer-to-peer learning group for super high net worth individuals and of Young Presidents Organization (YPO) – a private group of global chief executives whose companies employ 16 million people and generate 6-trillion USD in annual revenues

Author of the bestselling book “Economic Warfare: Secrets of Wealth Creation in the Age of Welfare Politics” and of the upcoming book ” Startup Saboteurs: How Incompetence, Ego, and Small Thinking Prevent True Wealth Creation” to be published in Summer 2019.

Mr. Abdelnour has over 30 year experience on Wall Street backing over 125 companies & serial entrepreneurs worth in aggregate over 20 billion dollars in the private equity, high yield bond and distressed debt markets.

Today, Mr. Abdelnour continues to be featured in hundreds of media channels and publications every year and is widely seen as one of the top business leaders by millions around the world.

He was just recently been featured as one of the 500 Most Influential CEOs in the World https://richtopia.com/inspirational-people/500-ceos

The Panelists:
Stephen Moore – Distinguished Visiting Fellow, Project for Economic Growth, at The Heritage Foundation.
As Distinguished Visiting Fellow at Heritage, Moore focuses on advancing public policies that increase the rate of economic growth to help the United States retain its position as the global economic superpower. He also works on budget, fiscal and monetary policy and showcases states that get fiscal houses in order.
“One of the projects I’m going to be working on is how President Obama has discredited liberal ideas more than anyone,” Moore said in an interview with The Foundry upon his return to Heritage. “Everything he’s done has been such a massive failure — from the [economic] stimulus to health-care reform to bailouts to green energy.
Moore’s early career was shaped by three people who had a profound influence on him: Julian Simon, the late Cato Institute scholar; Edwin J. Feulner, a co-founder of Heritage; and Art Laffer, the economist best known for the Laffer curve.
“What makes them so great is they were willing to take on the conventional wisdom. They were subject to a lot of criticism for doing that,” Moore told The Foundry. “Those are the real change-makers.”
Moore calls his creation of the Club for Growth the defining moment of his career. The organization, which he left in 2004, helps elect conservative members of Congress (including Heritage President Jim DeMint when he first ran for Senate).
Moore next founded the Free Enterprise Fund before joining The Wall Street Journal. As senior economics writer for the newspaper’s editorial board, he covered Washington policy debates and state issues.
“Because I’ve been a consumer of think tank material and policy research, I think I have a pretty good sense of what reporters want and how to get it to them in the way they want it,” Moore said. “Being timely — and not just offering opinion but giving them the facts and data is really critical.”
Moore, who grew up in New Trier Township, Ill., received a Bachelor of Arts degree from University of Illinois at Urbana-Champaign. He holds a Masters of Arts in economics from George Mason University.

David is the Chairman & CEO of Evolution Metals Corp. based in West Palm Beach, Florida. In addition, he holds numerous leadership positions in the private investment space, globally.

Mr. Wilcox’s career began at Deutsche Bank, based in both the London and New York offices, operating across 4 continents. He is a derivatives trading specialist but has also ran teams spanning various regulatory overhaul initiatives, driving value from government policy change.

Mr. Wilcox holds a Bachelor in Business from the University of Tennessee, and a Masters from St. Mary’s University, Twickenham, England.

Dr. Zhang has nearly 20 years of drug development & commercialization experiences with industry leaders such as Pfizer and Novartis, and the unique expertise to strategically integrate commercial, scientific, medical, and financial perspectives into drug development and investment decision making.

In his spare time, Dr. Zhang more than quadrupled his investment portfolio of biotech stocks over the last three and half years, by identifying winners before the Wall Street professionals given his industry expertise.

Dr. Zhang holds a Ph.D. in molecular biology from Columbia University, an M.B.A. from the Wharton School, and a B.S. in biology from Peking University.

Moderator
Annie Ma – Serial entrepreneur, investor and social activist with business interests in international consulting, education, medicine and media, among others.
As a senior angel investor, fund manager and investment banking professional, Annie has more than 20 years experiences of financial management. Before she started her own companies, Annie worked for UNIDO, Shanghai New Margin Fund Management Co., Ltd., and Air China before she came to further her studies in USA in 1999.

Since 2003, Annie has been Chairwoman and CEO of Ample Luck International Capital Group, of Beijing Zhongchuang Fengxiang Educational Technology Corp., and of Ample Luck Medic Group, Beijing Jin Se Hao Yu Media. She has also served as a partner and vice chairwoman of Chinese Red Strategic Ming Fund, Partner and Investment Advisory Committee member of Jun Yuan-Tong Sheng Venture Capital, Partner of Alpview Venture Capital; Founding Partner and Board Director of Apptech Gateway, and Financial Investor and Board member of Northern Pharmaceutical Group of Canada. Through her own company and funds she manages, Annie and her team has successfully helped more than 100 companies globally to do fund raising, M&A and IPO as well as direct investment into the companies.

On a social level, Annie has been a Committee member of All-China Youth Federation; Standing Committee of Hubei Province Youth Federation; Vice president of North American Chinese Science and Technology Association; and Committee chairman of the World Chinese Business Association of Investment. She is a recipient of a “Secondary Award” of National Scientific Advancement from China and “First Award” of Guangdong Provincial Scientific Advancement from Guangdong, China.

Prior to that, Daniel worked with World Journal as a metro desk, business and finance desk reporter during 1994-2001; with Institutional Investor as an intern in 1994 in New York and Beijing Review as a reporter, translator and book review editor during 1988-1993 in Beijing, China.

Daniel signed up as a volunteer of the Call Center at the Trump Headquarters in September 2016 and was later appointed a co-chair for the Asian American Community Outreach in the State of New York for Trump-Pence 2016. He organized or co-organized a series of rallies and gatherings in the City of New York and Philadelphia in support of Donald J Trump for his historical bid for the White House and has since become a strong advocate for conservative ideas and values in the United States involving himself actively in fundraising, grassroot organizing and promoting of the America First Agenda of President Trump. He was invited to join Trump Victory Finance Committee in May 2019.

Daniel graduated from Columbia University Graduate School of Journalism with a Master of Science degree in 1994 and from Peking University with a Bachelor of Arts degree (Philosophy) in 1988.

Due to limited seats and tickets available, please make sure you act fast and secure your tickets.

Be Our Valentine!!
Next Post: Updated as of February 27, 2020. Coronavirus, Bulletin of the Department of Health of Canada: Please tell your family and friends