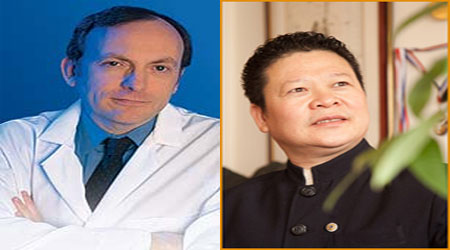 BioTime is a biotechnology company focused on the emerging field of regenerative medicine. Our core technologies center on novel stem cells capable of becoming all of the cell types in the human body. Products made from these “pluripotent” stem cells are being developed by our subsidiaries, each of which concentrates on different medical specialties, including: neuroscience, oncology, orthopedics, and blood and vascular diseases. BioTime’s commercial strategy targets near-term commercial opportunities such as Hextend and our current line of research products: ACTCellerate cell lines and associated ESpan culture media, HyStem hydrogels, and GMP human embryonic stem cell lines. In addition, the launch of HyStem-Rx as a cell delivery device is expected in 2013, and the launch of PanC-Dx as a novel blood-based cancer screen is expected by 2014.  www.biotimeinc.com

From the age of seven years, Great Master Qi has had a very strong influence from his family TCM practice. Great Master Qi was precocious and showed extraordinary diligence and a superior talent in the Martial Arts. His profound understanding of Buddhism during his early childhood made him stand out among all others during his eight years of study and practice of Buddhism at the Shaolin Temple. For his remarkable achievements he was honored to receive special training from Great Master Su Yun the head of the Shaolin Temple. He learned the unique qi gong technique called “Chan Yuan Gong”.

Thereafter he became Master of the 31st Generation of the Jin Gang One Finger Stand of the Shaolin Temple (an extraordinary physical and mental feat performed by very few). After leaving Shaolin Temple, he had the privilege to learn “Tibetan Qi Gong” from both the Panchan Lama (second to the Dalai lama) and Xia Ridong, which is only passed on to a very few outstanding monks at the Tibetan Temple.

Great Master Qi Fei-long combined the “Chan Yuan Gong”and the “Tibean Qi Gong” to create his powerful “ChanMi Gong” which has been officially recognized by the Chinese Government as one of the most powerful and useful methods for gaining and retaining one’s good health. He also absorbed *re essences from the five major schools(Buddhism, Thoism, Confucianism, Traditional Chinese Medicine and Martial Art$ and created Shaolin ChanMi Gong. It is a meditative exercise with certain dynamic movements including gestures, codes and visualizations.

Shaolin ChanMi Gong is both easy to learn and extremely effective in building up well-being and in strengthening the immune system. It also acts as a “supplement” for self healing longevity and for developing a higher level of intelligence.

Great Master Qi Fei-long has developed some very special abilities using both universal and human energy. He uses his “qi” to educate people in the art of self-healing. Wiith his qi emission, he can set an ordinary newspaper on fire, slice through a number of plastic chopsticks with a $20 dallier bill, pull a solid building brick apart with his bare hands and stop the second hand of a wall clock, etc. His audiences and clients have always been duly impressed by the sight of these special abilities, which have been reported by major newspapers and tV stations in over 20 countries worldwide.

Great Master qi Fei-Long is also a world renowned Martial Arts Champion with scores of national and international honors and awards. He is both a judge and a referee of IKFF and a 9th Degree Black let from the International Kung-Fu Federation.

Great Master qi Fei-Long has developed a series of award winning health care products using special blends of herbs. Among them are the meditation cushion, cap and pillow all of which have gained patent status. These products not only enhance one’s qi effect, but also are useful in balancing Yin and Yan, opening meridians and assisting in the overall well-being of an individual.