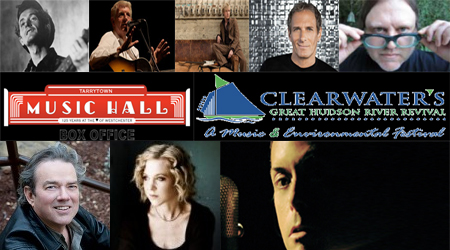 At the Tarrytown Music Hall in Westchester we just confirmed: Nick Lowe & His Band (4/27), Kenny Wayne Shepherd (5/11), Michael Bolton (6/15), Matthew Sweet performing his Girlfriend album in its entirety (6/23) and Ani DiFranco (11/14).   Tickets and info at TarrytownMusicHall.org.

Get up to date info and special offers on our shows by joining our Facebook page by clicking here.

Inspired by Pete Seeger’s desire to clean up the Hudson River over forty years ago, the Great Hudson River Revival (Clearwater Festival) initially helped raise the funds to build the sloop Clearwater, which has since become a world-renowned floating classroom and a symbol of effective grassroots action. Today, Hudson River Sloop Clearwater is a non-profit organization that sails at the forefront of the nation’s environmental challenges. All proceeds go
directly to support Clearwater’s environmental research, education and advocacy efforts to help preserve and protect the Hudson River and its tributaries and communities in the river valley – as well as keeping the Clearwater afloat.

The Pre-Advance period for tickets ends on Thursday, May 3 so buy now and save!  Kids under 12 get in for free!  Tickets and info at ClearwaterFestival.org.

Multi-platinum artist Joan Osborne returns to the Music Hall after selling out her two previous appearances. Joan has proven to be an artistically restless and consistently enthralling performer. Osborne’s breakthrough, debut album Relish, sold five million copies worldwide and yielded the smash hit “One Of Us.” Since then, she’s released numerous records, toured the world and was the lead singer of The Dead. Bring it on Home, Joan’s new album which comes out in March, is a collection of vintage blues, R&B and soul classics.

A special evening of music and humor featuring Guster playing acoustic and comedian Jeff Garlin opening the show. Guster is the quintessential American alternative rock band is known for its live performances, humor and activism. Jeff Garlin is a stand-up comedian, actor and producer, best known for his role as Jeff Greene on the HBO show Curb Your Enthusiasm.

Greg Lake “Songs of A Lifetime”

An intimate performance of one of the greatest voices and musical minds of a generation
Greg Lake is embarking on a world tour, “Songs of a Lifetime”, an intimate autobiographical musical journey in song and story. Included are many of the best-known songs from Emerson Lake and Palmer and King Crimson, along with story-teller style commentary by Greg about his entire life and career.

Get The Led Out

From the bombastic and epic to the folky and mystical, Get the Led Out have captured the essence of the recorded music of Led Zeppelin and brought it to the big concert stage like no other band. The group re-creates the songs in all their depth and glory with the studio overdubs that Zeppelin themselves never performed live. Get The Led Out present a two hour set each night that spans the mythic career of the legendary British supergroup. With a strong focus on the early years, they also touch on the deeper cuts that were seldom, if ever heard in concert.

OTHER UPCOMING SHOWS AT THE TARRYTOWN MUSIC HALL

Naked Soul takes place at the Rubin Museum of Art in NYC, the only museum in North America whose entire collection is artwork from the Himalayas.  It’s a very unique series as it is all acoustic and un-amplified – no mics or amps (Naked) in the Rubin’s 137 seat all cherry wood-lined theater which has amazing acoustics.  Artists make connections between their songs and the art (soul).

Falu
Tonight at 7pm
Sold Out!

After a sold out concert in 2011, Falu is back by popular demand for a special Naked Soul concert featuring new, all-acoustic songs.  Falu is a classically trained Indian vocalist whose diverse musical repertoire captures both her traditional roots as well as her unique ability in combining Hindi music with inventive rock.

The critical acclaim composer Jimmy Webb has received during his more than forty years of success is as remarkable as the accomplishments they honor: Webb is the only artist to ever receive Grammy awards for music, lyrics, and orchestration, he is a member of the National Academy of Popular Music Songwriter’s Hall of Fame.  His “By The Time I Get To Phoenix,” has been the third most performed song in the last fifty years, with “Up, Up and Away” on the same list in the top thirty. Webb’s “Wichita Lineman” has been listed in Mojo Magazine’s worldwide survey of the best one hundred singles of all time in the top fifty, and was singled out in Blender as “The Greatest Song Ever.”

Kristin Hersh founded her influential art-punk band Throwing Muses at age 14. She now performs solo acoustic concerts in addition to performing with Throwing Muses and 50 Foot Wave. She returns to the Rubin after her previous sold out show in 2010!

OTHER UPCOMING SHOWS AT NAKED SOUL