You are here: Home / Peace / My Vietnam War Letter by Nancy Mikaelian Madey

A letter to a Vietnam Soldier as a young child becomes a story of peace, love and hope. Our Interview occurred on 9/11, no more war, please.

Hidden stories from the past uniquely find their way into the present, leaving an indelible imprint. This is one of those stories.

1970 was a challenging year for America. The United States sent an additional 334,600 active military troops overseas to Vietnam to continue the U.S. war efforts against the spread of communism. Students opposing the war were demonstrating on college campuses, and organized protests and marches were held across the country.

Meanwhile, at an elementary school in Racine, Wisconsin a third grade class was writing letters to those brave unknown soldiers who were fighting a battle across the globe––not really knowing what war was.

Somehow, a 23-year-old man already knew what it was like: the soldier who received my letter. His name was Mike Conrad, serving in the 101st Airborne. I can recall the sheer happiness and excitement upon receiving a response back in an airmail envelope personally addressed to me. And, I bet Mike was equally thrilled to receive my letter. I can remember anxiously opening up the letter dated January 26, 1970:

First of all let me thank you for taking time out to write. It really means a lot to all of us when we get a letter. Especially when it is one from a pretty girl like you. My name is Mike. I am from Gastonia, North Carolina. I am 23 years old. I am married but I don’t have any children. My wife’s name is Becky. It is the middle of monsoon season here in Vietnam. This means that it rains almost all of the time. I’m glad to hear that you like school. This will help you a lot in life. Because a good education is very important. Always be sure that you do your best in everything you do. I better go for now. Thank you again for the very nice letter and the pretty picture of yourself. If you get a chance write again. Be good and study hard.

P.S. Tell all of your family and everybody in your class hello for me. Okay?”

American soldiers were drafted to fight for freedom and ideology in Vietnam, and in a way, we all are now drafted into a different kind of war. Back then it was serving on the battlefield and keeping a clean locker. Now it’s staying home and wearing masks when we go out. During the shelter-in-place, I decide to do some deep cleaning. Tucked away in the back of our closet was a cardboard box of memories nearly forgotten with time.

I opened the box which contained my childhood keepsakes: artwork, report cards, photos, and Mike’s letter. I picked up the neatly folded letter and re-read it. I held a snapshot of history in my hands––“Your friend, Mike Conrad.” His name kept ringing throughout my head and truly moved me into action. I wondered where he was now, and if he would even remember the little girl who wrote to him 50 years ago.

Since I had his full name, I did some online research to try and connect with him. Sure enough, I found a Mike Conrad in Gastonia, North Carolina—it had to be him! As I dug a bit deeper, I sadly learned that he passed away in January 2019. I read his obituary and also learned that Mike was an avid traveler and community volunteer—what a guy!

I was now, more than ever, determined to get a copy of Mike’s letter to his family. While continuing my research, I found the name of Mike’s wife, Becky Conrad. I sent a letter to her along with a copy of Mike’s original letter from 1970. Not knowing whether or not the address I found was current, I crossed my fingers and remained optimistic. In a time when we could all use some good news, I hoped my letter would reach her and spark something. And, boy did it ever!

“Such a touching surprise,” were her words in an email back to me, “joyful and bittersweet at the same time.” Becky emailed me a photo of Mike during his service in Vietnam, a photo of their family, and as an unexpected surprise, a copy of my letter that I had written back to Mike, dated February 3, 1970. Mike obviously treasured my letter just as much as I had treasured his. 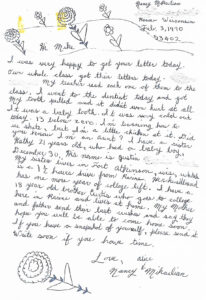 “I was very happy to get your letter today. Our whole class got their letters today. My teacher read each one of them to the class. I went to the dentist today and got my tooth pulled and it didn’t even hurt at all. It was a baby tooth. It was very cold out today. 13 below zero. I’m learning how ice skate, but I’m a little chicken at it. Did you know I am an aunt? I have a sister Kathy 21 years old, who had a baby boy December 30th. His name is Justin. My sister lives in Fort Atkinson, Wisconsin which is a 1-1/2 hour drive from Racine. Her husband has one more year of college left. I have an 18 year old brother Curtis who goes to college here in Racine and lives at home. My mother and father send their best wishes and say they hope you will be able to come home soon. If you have a snapshot of yourself, please send it. Write soon if you have time.
Love, Nancy Mikaelian”

Not too bad for a third grader!

Now as a grown woman, wife and mother of two children, I have a better understanding of war, and what these young soldiers and their families had to endure.

I eventually spoke with Becky over the phone and she filled in the gaps about Mike’s life. He passed away from Multiple Myeloma—a cancer he contracted from the USA’s use of Agent Orange. She shared some personal stories about the young man I never knew, who grew up to be a wonderful husband for nearly 51 years, a father, and a grandfather.

Even though Mike is not here with us today, 50 years later he managed to help unite two families—all with a simple stroke of a pen, “Your friend, Mike.”

IBM.TV Broadcasts the Peace Day Celebration to the World
Next Post: Talk About Peace