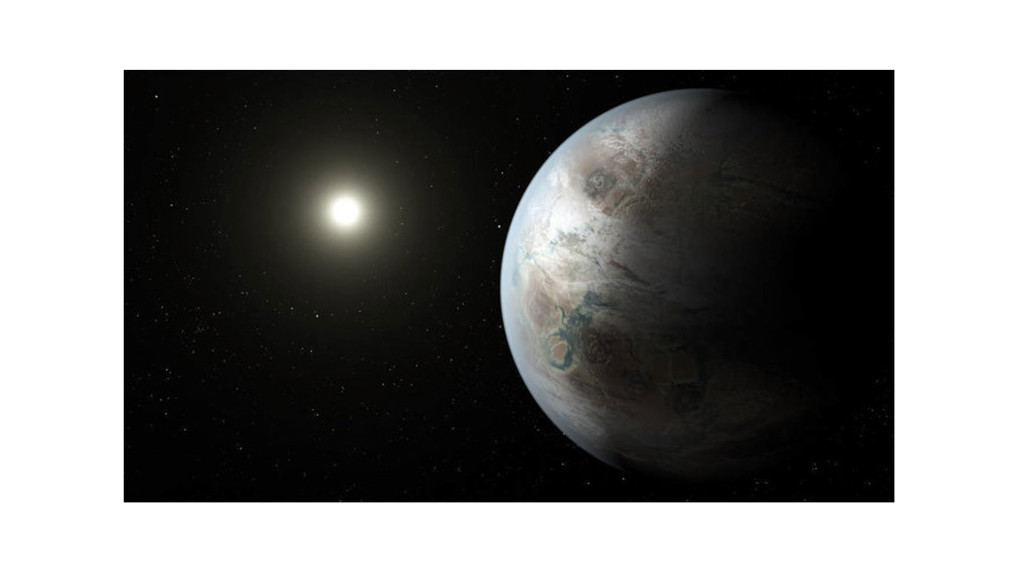 An artist’s concept of Kepler 452b orbiting its star, 1,400 light-years from Earth. The planet’s size puts it right on the edge between being rocky like Earth and a gas ball like Neptune. CreditT. Pyle/Jet Propulsion Laboratory/NASA

Inching ahead on their quest for what they call Earth 2.0, astronomers from NASA’s Kepler planet-hunting spacecraft announced on Thursday that they had found what might be one of the closest analogues to our own world yet.
It is a planet a little more than one and a half times as big in radius asEarth. Known as Kepler 452b, it circles a sunlike star in an orbit that takes 385 days, just slightly longer than our own year, putting it firmly in the “Goldilocks” habitable zone where the temperatures are lukewarm and suitable for liquid water on the surface — if it has a surface.
The new planet’s size puts it right on the edge between being rocky like Earth and being a fluffy gas ball like Neptune, according to studies of other such exoplanets. In an email, Jon Jenkins of NASA’s Ames Research Center, home of the Kepler project, and lead author of a paper being published in The Astronomical Journal, said the likelihood of the planet’s being rocky was 50 percent to 62 percent, depending on uncertainties in the size of its home star. That would mean its mass is about five times that of Earth.
Such a planet would probably have a thick, cloudy atmosphere and active volcanoes, Dr. Jenkins said, and twice the gravity of Earth. Describing the planet during a news conference, Dr. Jenkins lapsed into lines from John Keats’s poem “On First Looking Into Chapman’s Homer”: “Then felt I like some watcher of the skies / When a new planet swims into his ken.”
The star that lights this planet’s sky is about 1.5 billion years older than our sun and 20 percent more luminous, which has implications for the prospects of life, Dr. Jenkins said.
“We can think of Kepler-452b as an older, bigger cousin to Earth, providing an opportunity to understand and reflect upon Earth’s evolving environment,” he said. “It’s awe-inspiring to consider that this planet has spent six billion years in the habitable zone of its star, longer than Earth. That’s substantial opportunity for life to arise, should all the necessary ingredients and conditions for life exist on this planet.”
Asked if any radio telescopes had pointed at the planet to try to detect extraterrestrial radio broadcasts, Dr. Jenkins said, “I hope so.”
To determine whether Kepler 452b deserves a place on the honor roll of possible home worlds, however, astronomers have to measure its mass directly, which requires being close enough to observe the wobbling of its star as it is tugged around by the planet’s gravity. For now, that is impossible, as Kepler 452b is 1,400 light-years away.
The planet is the first to be confirmed in a new list of candidates unveiled by Kepler astronomers on Thursday. It brings the number of possible planets discovered by Kepler to 4,696, many of them small like Earth. “We are the bread crumbs of the universe,” said Jeff Coughlin, of the SETI Institute in Mountain View, Calif., who compiled the catalog.
The spacecraft, launched in 2009, spent four years staring at a patch of the Milky Way on the border between the constellations Cygnus and Lyra, looking for the dips in starlight caused by the passage of planets. Its pointing system failed in 2013, but astronomers are still analyzing the data Kepler collected. Every time they sift through it, new planets pop out.
In the meantime, Kepler has switched to a different mode of observing in a mission called K2.
The NASA news conference coincided with a major anniversary: It was only 20 years ago this fall that Michel Mayor and Didier Queloz, of the University of Geneva, discovered a planet circling the star 51 Pegasi, about 50 light-years from here. It was the first planet known to belong to a sunlike star outside our solar system, and its discovery ignited an astronomical revolution.
Dr. Queloz, now at the University of Cambridge in England, said at the news conference, “This is a great time we live in.”
“If we keep working so well and so enthusiastically,” he went on, it is not too optimistic to think that in the future, “the issue of life on another planet will be solved.”
Astronomers say they now know from Kepler that about 10 percent of the 200 billion stars in the Milky Way have potentially habitable Earth-size planets, Kepler 452b probably among them. This means that of the 600 stars within 30 light-years of Earth, there are roughly 60 E.T.-class abodes, planets that could be inspected by a future generation of telescopes.