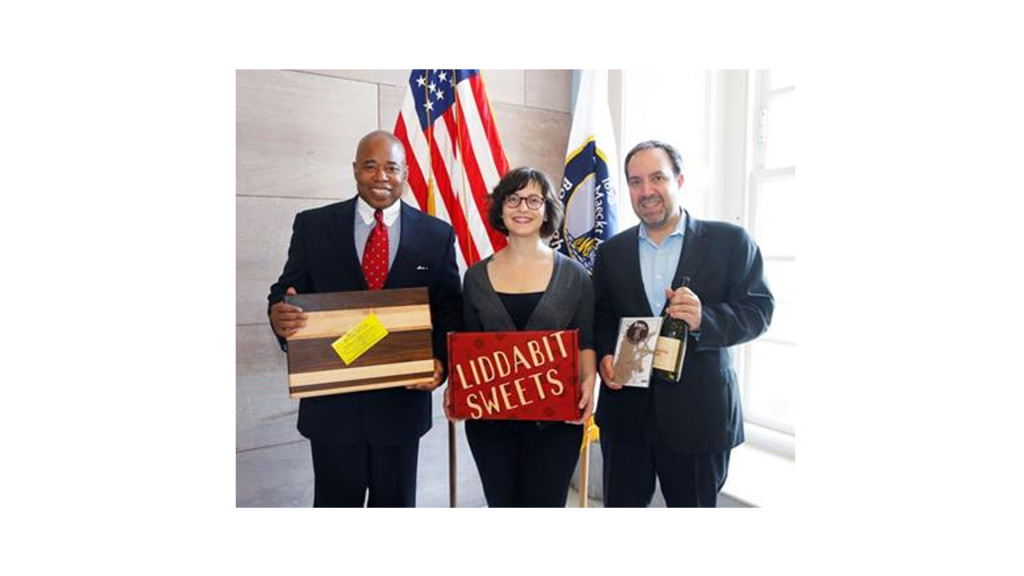 BROOKLYN, NY, May 14, 2015: Today, Brooklyn Borough President Eric L. Adams and Brooklyn Chamber of Commerce President and CEO Carlo A. Scissura paid up on their bet with Atlanta Mayor Kasim Reed over the playoff series between the Brooklyn Nets and the Atlanta Hawks, sending him an assortment of products that have all been certified as Brooklyn-Made. The package included a model kit of a water tower from Boundless Brooklyn, a wooden cutting board from Brooklyn Butcher Blocks, a bottle of chardonnay from Brooklyn Winery, and a box of chocolates from Liddabit Sweets. Borough President Adams and Brooklyn Chamber President Scissura expressed their pride in the Nets’ fight during their six-game series with the Hawks as well as in the local goods they were sharing with Mayor Reed.

“When you’re sending someone products from Brooklyn, everybody wins,” said Borough President Adams. “Our borough is proud of our hometown Nets and their playoff run, and we maintain the same ‘wait until next year’ spirit that has been a local refrain ever since the days of the Dodgers at Ebbets Field. In the meantime, Brooklynites are good sports, so I’m happy to send Mayor Reed some of the finest our borough has to offer. Hopefully it will inspire him and other Atlantans to shop for Brooklyn’s best.”

“In the spirit of good sportsmanship, we congratulate the Atlanta Hawks on their win, and are delighted to share some of the finest Brooklyn-Made products with Mayor Reed!” said Brooklyn Chamber President Scissura. “Atlantans should see our gifts as an invitation to Explore Brooklyn, and experience top-rated dining, events, shopping, attractions and much more in the Borough of Kings. We remain proud of our home team, the Brooklyn Nets and are rooting for them to win in next year’s playoff run.”

“While we are sad the Nets lost, we are happy that the Mayor of Atlanta is going to get the opportunity to taste our Brooklyn-Made wine,” said John Stires, co-founder of Brooklyn Winery.

“Though the Nets’ loss was disappointing, we’re happy to have been able to give some of our sweets a good home in Atlanta,” said Liz Gutman, co-founder of Liddabit Sweets.

Brooklyn Borough President Eric L. Adams, holding a wooden cutting board from Brooklyn Butcher Blocks, and Brooklyn Chamber of Commerce President and CEO Carlo A. Scissura, holding a model kit of a water tower from Boundless Brooklyn and a bottle of chardonnay from Brooklyn Winery, join Liddabit Sweets co-founder Liz Gutman, holding a box of chocolates from Liddabit Sweets, in showcasing the Brooklyn-Made products that are being sent to Atlanta Mayor Kasim Reed to pay up on their bet over the playoff series between the Brooklyn Nets and the Atlanta Hawks.