You are here: Home / All We Need Is Love / Children and Parents / New Survey Finds that Games are the Perfect Activity to Get Families Engaged and Feeling Happier 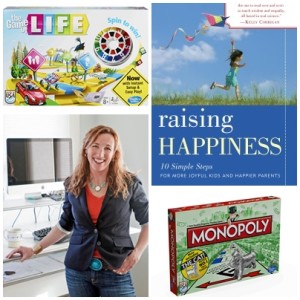 BUILD FUN INTO YOUR DAY!

The constant distraction of email, texting, and social media is clearly impacting family time together. It’s become much harder for parents to create technology-free time with their kids, but when they do make the time, it gives their family’s mood a positive boost.

The majority of Americans aren’t satisfied with the amount of quality time their family spends together, according to a recent survey   In interviews on Tuesday, November 26, happiness expert, sociologist and parent educator, Dr. Christine Carter will share:

•    Results from the survey
•    How family game nights can enhance  the  family dynamic and build life-learning skills
•    Creative, fun ways  to work more family time into your schedule

About the Spokesperson:
Dr. Christine Carter is a happiness expert, sociologist and parent educator based out of UC Berkeley’s Greater Good Science Center. She is the author of RAISING HAPPINESS: 10 Simple Steps for More Joyful Kids and Happier Parents. Dr. Carter also writes an award-winning blog, which is syndicated on the HuffingtonPost and PsychologyToday.com. Best known for her happiness and parenting advice, Carter draws on psychology, sociology, and neuroscience, and uses her own chaotic and often hilarious real-world adventures to demonstrate the do’s and don’ts in action. Dr. Carter has been quoted or featured in The New York Times, the Los Angeles Times, USA Today, the Chicago Tribune, the San Francisco Chronicle, The Washington Post, the Boston Globe, as well as Good Housekeeping, Parenting, Martha Stewart’s Whole Living, Fitness, Redbook, and dozens of other publications. She has appeared on the “Oprah Winfrey Show,” the “Dr. Oz Show”, the “TODAY” show, the “Rachael Ray Show,” “The Daily Show with Jon Stewart,” “CBS Sunday Morning,” “ABC World News with Diane Sawyer”, PBS, as well as NPR and BBC Radio. In 2010, she received an award from the Council on Contemporary Families for her outstanding science-based reporting on family issues. In 2012 she won Red Tricycle’s awards for the “Most Influential Blog” and “Best Parent Education” and twice she has been nominated for an award from the American Sociological Association for public sociology.

Save the Date: March 19th 2014 for the Inaugural Giving Back Foundation Gala
Next Post: Celebrate Holidays at the Apollo With Coca-Cola Winter Wonderland- Free Event- Saturday, December 14th – 2pm -6pm