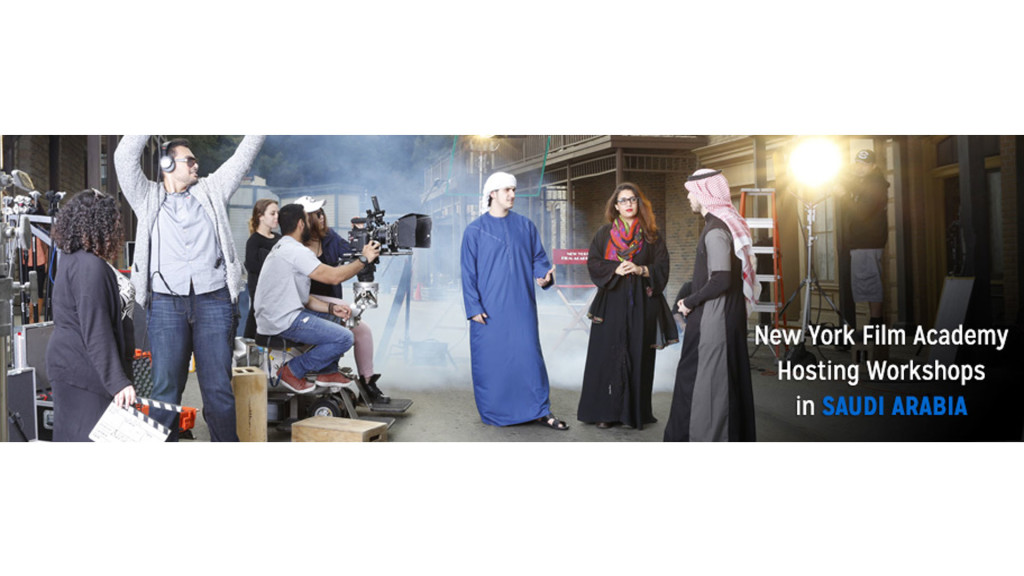 In cooperation with the U.S. Embassy in Riyadh, Saudi Arabia, the New York Film Academy Foundation, in collaboration with the New York Film Academy College of Visual & Performing Arts (NYFA), is facilitating a series of filmmaking educational activities supported by the Saudi American Education and Cultural Grants Initiative Grants Program. The NYFA programming commences in mid-March 2016.

“The New York Film Academy has been the academic institution of choice to numerous students from Saudi Arabia, many of whom have returned to their country and are deeply attached to the Kingdom’s blossoming creative community,” said NYFA President, Michael Young. “We are very proud to be part of their achievements as visual storytellers, and we are honored to partner with the U.S. Embassy to develop the exceptional talent emerging from Saudi Arabia today.”

To continue its close association with the Kingdom of Saudi Arabia’s education, arts, and cultural communities, NYFA will be hosting a series of workshops at the 3rd Annual Saudi Film Festival (“Dammam Film Festival”) held in Dhahran, Saudi Arabia from March 24th – 28th. Working with the Saudi Arabia Society for Culture and Arts (SASCA), Mr. Jonathan Whittaker, NYFA Chair of Short-term Programs and Professor of Director’s Craft, Screenwriting, and Cinematography, will be conducting a three-day intensive and hands-on Master class workshop in Cinematography for up-and-coming Saudi filmmakers attending the Film Festival. At the closing ceremony of the festival NYFA will be presenting the “NYFA AWARD FOR EMERGING TALENT”-a full tuition scholarship to NYFA-to the winner in the “Best Student Film” category.

In partnership with renowned King Saud University (KSU) in Riyadh, NYFA will hold a Master class workshop titled, “Cultural Identity: Through a Lens,” which intends to have young Saudi filmmakers, selected by KSU, to make short films that portray a personal view of some aspect of Saudi culture. Mr. Whittaker, along with the workshop’s associate faculty instructor, Mr. Aymen Khoja, a Saudi filmmaker and NYFA alumnus, will work with 20 participant-storytellers through a six day program that aims to provide students with the opportunity to write, produce, shoot and edit his or her own film, and will finalize with four final productions that will be shared through social media.

NYFA will support the launch of the “1st Youth Film Festival,” and on March 30 will conduct a “Directing the Performance” class and lecture to approximately 70 Embassy youth club members at the U.S. Embassy in Riyadh.

Throughout all of NYFA’s March program activities in Saudi Arabia, Mr. Whittaker and Mr. Khoja will be assisted by a group of Saudi teacher assistants who are alumni of NYFA. A documentary short film will be shot and produced so that this exciting initiative can be shared with the world.

New York Film Academy College of Visual & Performing Arts (NYFA) is listed as a recommended school by the Saudi Arabian Ministry of Higher Education and is considered the best hands-on film school in the world by many of today’s top filmmakers.

New York Film Academy College of Visual & Performing Arts is accredited by the National Association of Schools of Art and Design (NASAD) and provides students with a variety of options to access a performing and visual arts education. With locations all around the world, the New York Film Academy has grown into an international film and performing arts school with a focus on learning by doing, providing its students with hands-on instruction. Students can choose to enroll in one of the Academy’s MFA, MA, BFA, BA, and AFA U.S. Accredited degree programs, Conservatory programs, and short term workshops in filmmaking, acting for film, photography, producing, 3D animation, cinematography, screenwriting, documentary filmmaking, game design, musical theatre, broadcast journalism, music video, graphic design, illustration, and digital editing.

The Academy is also known for hosting one of the most exclusive Guest Speaker Series in the world, which has delivered guest lectures from industry elites such as Al Pacino, Ron Howard, Kevin Spacey and Saudi Arabian-born producer, Mohammed Al Turki.