NFL’s First Female Official! SARAH THOMAS. We interview her on January 31, 2017 right before the Super Bowl. Do you have any question that you want me to ask her? If so email me at paul.sladkus@goodnewsbroadcast.com Video coming and Podcast.

You are here: Home / Today's Good News / NFL’s First Female Official! SARAH THOMAS. We interview her on January 31, 2017 right before the Super Bowl. Do you have any question that you want me to ask her? If so email me at paul.sladkus@goodnewsbroadcast.com Video coming and Podcast. 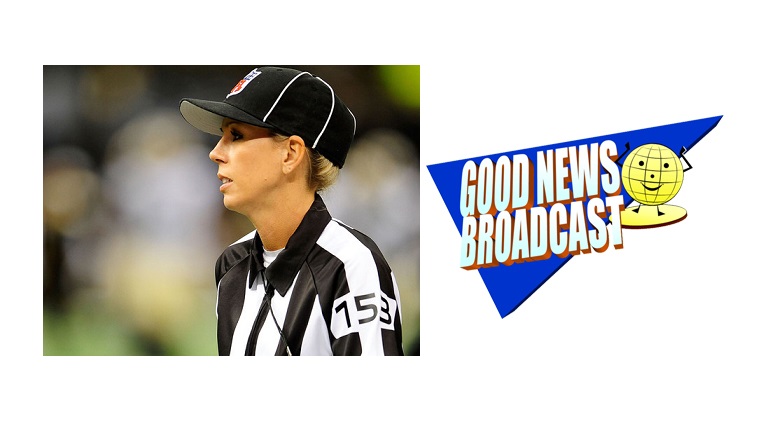 NFL’s First Female Official
Sarah Thomas!
SARAH THOMAS
Chats with Your Listeners about Game Day Prep,
What It Is Like to Be a Female Official in the NFL,
And What Is Happening for Next Season!

Sarah Will Also Discuss Her Role in the New “It Starts Inside” Campaign,
And Share Her Inspirational Story of the Challenges She Overcame
to Become the NFL’s First Female Official
Confirmation of Your RADIO Interview on Monday, January 30th!

What and Who: Pull out the pigskin! The NFL’s first full-time female official Sarah Thomas, will chat with your listeners about Super Bowl LI, provide refresher tips on what various calls on the field indicate, discuss what it is like to be an official in the NFL, and talk about what is happening with the NFL franchise(s) that are popular in your particular market!
In addition, Sarah is partnering with Activia for the brand new “It Starts Inside” campaign which showcases inspirational women with unique backgrounds who transcended internal conflict, fulfilled their potential, and their achieved their goals. As part of the campaign, which is being introduced mid-January, Sarah will be sharing her inspiring personal story of the challenges she overcame to become the NFL’s first full-time female official and will encourage other women to realize the potential that starts within each of them. Her story will be featured in a television commercial which will debut prior to the Big Game, highlighting Sarah’s life both on and off the gridiron is an inspiration. Before making NFL history, Sarah was the first woman to officiate a major college football game and a bowl game. While celebrating breakthrough moments, Sarah balances being a wife, mother of three children, and her professional career.

additional biographical information on NFL official Sarah Thomas:
Having made history as the first full-time female official in the NFL, Sarah Thomas’ history-making professional football game happened on September 13th, 2015, between the Kansas City Chiefs and Houston, Texans (also marking her first season as an NFL official). Her hat, whistle, and flag from that game are now on display at the NFL Football Hall of Fame.
Having begun her football officiating career in 1996 when she attended a meeting for aspiring football officials with her brother Lea, Sarah was the first female to officiate in a Division 1-A high school football game in Mississippi. She began officiating at the college level when she was hired by Conference USA in 2007 and has officiated as a line judge and head linesman during her collegiate career.
Sarah was the first female selected to officiate a bowl game when she took the field in Detroit for the Little Caesars Pizza Bowl in 2009. In addition, she has been selected two times to officiate the Under Armor Senior Bowl in Mobile, Alabama and has been selected to officiate the 2013 First Hunger Bowl, the 2015 Medal of Honor Bowl, and the Conference USA Championship game in 2010 and 2014.
Born in Pascagoula, Mississippi, Sarah is a graduate of the University of Mobile in Alabama where she earned a full scholarship as a basketball player and Academic All-American honors.

Beat the Blues with the Joys of Travel! The third Monday in January is commonly known as “Blue Monday” – the most depressing day of the year. But it doesn’t have to be a downer day! Travel reporter and Travelgirl Magazine editor-in-chief Stephanie Oswald. Stephanie has been sharing great travel tips with Good News for years, search her on the site and hear great, practical comments about travel, saving money and enjoying your travel to it’s fullest. Videos and Podcast.
Next Post: Westwood Gallery