Nicholas Vogelzang on the Top Cancer Breakthroughs of 2011

You are here: Home / All We Need Is Love / Nicholas Vogelzang on the Top Cancer Breakthroughs of 2011 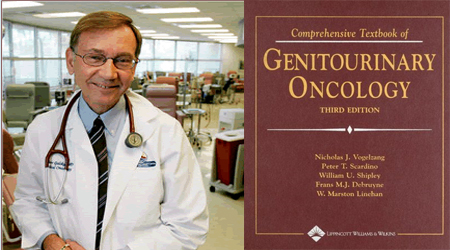 The American Society of Clinical Oncology (ASCO) is releasing their annual report on the progress against cancer. The report, published online in the Journal of Clinical Oncology (JCO), details the most significant clinical cancer research findings of the past year. The focus of this year’s report is on prevention and screening, making progress against some of the deadliest cancers, reducing cancer recurrence, and new drug approvals.

This year marks the 40th anniversary of the National Cancer Act, which strengthened the National Cancer Institute and created the National Cancer Program, and some important policy milestones against cancer have been made. President Obama issued an executive order to reduce shortages of life-saving hospital medications and the UN convened a high-level meeting on non-communicable diseases that called for global action. But there is still a lot of work to be done. Nearly 1.6 million new diagnoses are expected in 2011, and nearly 572,000 Americans are expected to die from cancers this year alone.

In interviews on December 6, 2011, Nicholas J. Vogelzang, MD, will discuss these latest findings and research advances in the fight against cancer, including:

– The FDA approval of a targeted treatment for patients with advanced non-small-cell lung cancer
– A study that found the use of CT scanning among people at high risk for lung cancer reduced the death rate.
– Studies on two new drugs that showed improved survival and delayed disease progression in patients with advanced melanoma.
– A Phase III trial that found a way to greatly reduce the risk of developing invasive breast cancer in postmenopausal women at very high-risk for the disease.
– For the first time, the cure rate for children with a type of leukemia (ALL) pushed past 80 percent for what was once one of the deadliest pediatric cancers.

ABOUT THE TALENT: Nicholas J. Vogelzang, MD, a cancer survivor himself, is Co-Executive Editor of the report, Chair and Medical Director of the Developmental Therapeutics Committee and a member of the Genitourinary Committee for U.S. Oncology Research. He also serves as Vice Chair of the Southwest Oncology Group Genitourinary Oncology Committee and is Clinical Professor of Medicine at the University of Nevada School of Medicine in Las Vegas, Nevada.
This interview is sponsored by The American Society of Clinical Oncology.