You are here: Home / Good News To Go / The NYC 5K Schlep 2016: Raising awareness and funds for Breast and Ovarian Cancer 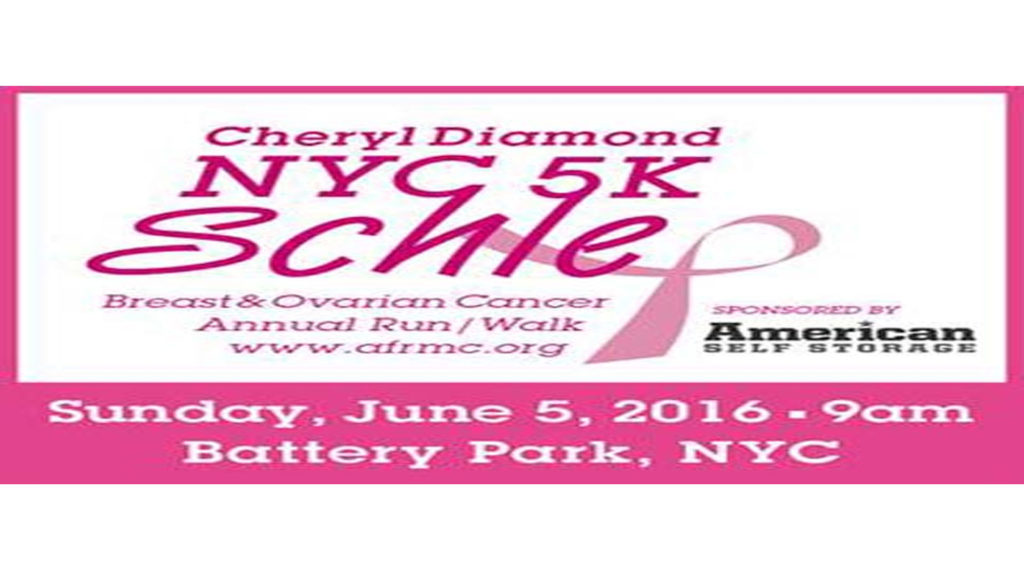 Battery Park NYC, Sunday, June 5th— On an overcast June morning, hundreds of people came out to support the American Friends of Rabin Medical Center’s Sixth Annual Cheryl Diamond NYC 5K SCHLEP Run/Walk for Breast and Ovarian Cancer. The picturesque scene at Robert F. Wagner Jr. Park drew schleppers, runners, walkers and volunteers of all ages and abilities to participate in a 5K race and walk on the Battery Park promenade, opposite the Statue of Liberty. Participants travelled from all around the Tri-State area and from across the United States to support the cause, some from Florida, Illinois, Kentucky, and even as far as Israel.

The Cheryl Diamond NYC 5K SCHLEP raises awareness of breast and ovarian cancer, and collects funds for cancer care and research that will lead to its eventual elimination. Breast and ovarian cancers are the most common cancers afflicting women in the United States and Israel. One in seven women will be diagnosed with breast cancer and over 22,000 women will be diagnosed with ovarian cancer annually. Donations and proceeds from the NYC 5K SCHLEP benefit the BRCA Gene Multidisciplinary Clinic which serves women at high risk of breast and ovarian cancer, as well as funding research to find cures for breast and ovarian cancers at the Davidoff Cancer Center of Israel’s Rabin Medical Center- a world class facility for the treatment and prevention of cancer with patients from around the world. Many of the Cheryl Diamond NYC 5K SCHLEP participants themselves have been affected by these devastating diseases. Some are survivors and patients themselves, some are family members of survivors and patients, and some are the surviving family members of victims of these terrible diseases.

This year, we partnered with JCRC-NY, Israel American Council, and the Celebrate Israel Parade, as the Cheryl Diamond NYC 5K Schlep took place just a few hours before the annual parade along Fifth Avenue in Manhattan. Many of our participants joined in the parade directly after the Schlep, making it a full day of generous support to important causes, and perhaps leaving many with sore feet but a feeling of his or her own contribution to causes greater than oneself.
Thank you to the following companies and organizations for co-sponsoring and supporting the Cheryl Diamond NYC 5K SCHLEP: American Self Storage, Celebrate Israel Parade, Central Synagogue, Congregation Emanu-El, El Al, Congregation Ohab Zedek, Genetech, the Consulate General of Israel in New York, 14th Street Y, JLL, IDB Bank, the Israeli American Council, JCRC-NY, NYU Bronfman Center, NYU Hillel, Shiboleth, Shleppers Moving & Storage, StorageBlue, and Tamid: The Downtown Synagogue. These companies and organizations contributed to the success of the NYC 5K SCHLEP in the weeks leading up to June 5, and in their support through generous donations, social media posts, email blasts, and in bringing participants.
Special thanks to Shleppers Moving Company and their President Jason Friedland for their donation of time, trucks, and general support at the Sixth Annual Cheryl Diamond NYC 5K SCHLEP. Their donation of services and the hard work of their team greatly contributed to the success of the race and its mission in curing breast and ovarian cancer.
The 2016 Cheryl Diamond NYC 5K SCHLEP was resoundingly successful, as about five hundred supporters donated or registered for AFRMC’s 2016 SCHLEP for research and treatment of both breast and ovarian cancer. Before runners and walkers took their marks, event sponsor, Warren Diamond, the husband of the late Cheryl Diamond, the namesake of this race, thanked the crowd for gathering and encouraged guests to continue to fight against these two devastating diseases by raising awareness and participating in events like the SCHLEP. Following Mr. Diamond’s speech, AFRMC Executive Director Dr. Joshua Plaut welcomed guests to the event and reminded NYC 5K SCHLEP participants, “We all know someone with breast or ovarian cancer: MOTHER. WIFE. SISTER. DAUGHTER. FRIEND. SURVIVOR.”

Dr. Plaut then surprised the crowd by introducing Richard “Rip” Hamilton, the NBA champion and former member of the Detroit Pistons and the Chicago Bulls. He, along with his wife, T.J., a breast cancer survivor, inspired 211 schleppers, runners and walkers, by serving as a reminder that cancer has a real-life impact, but that it can be defeated. This speech served as motivation to keep fighting for cancer’s eventual elimination and to offer hope and encouragement to cancer patients.

At 9:15 a.m. the runners and walkers approached the starting line just as Dr. Plaut sounded the blow horn, and the Schlepping began! About 20 minutes and 30 seconds later, the first schlepper triumphantly crossed the finish line, Ilan Orgel, 16, of The Abraham Joshua Heschel School in Manhattan. In second, and the winner of the overall female category, Meg Pickarski, followed only 25 seconds later, at 20 minutes and 45 seconds, threatening to overtake Mr. Orgel until the very last second, as the crowd cheered them on.

Around 10:15 a.m. the award ceremony began, where Rip Hamilton joined Dr. Plaut in handing out prizes to the winners per age category, including the youngest participant who was only 18 months old! Awards were given to the fastest runner by age group and gender, the best fundraiser, the best fundraising team, fastest female overall, and fastest male overall. Mr. Hamilton then awarded T.J. her own Schlep medal, as recognition for her own fight against cancer. Top runners were given a top schlepper medal, plaque, and gifts such as a Fitbit and Life is Good Hat. The best fundraiser and the best fundraising team won tickets to a VIP tour of ONE WORLD OBSERVATORY at One World Trade Center, which includes a breathtaking view of New York City on top of the tallest building in the city.

Thank you to all of our schleppers, runners and walkers, volunteers and donors, for schlepping with us and supporting this wonderful event. We hope you schlep with us again at our next June 2016 Cheryl Diamond NYC 5K Schlep: Breast & Ovarian Cancer Run/Walk on Sunday June 4, 2017!

If you would like to make an additional donation for breast and ovarian cancer research, please visit the NYC 5K SCHLEP website at afrmc.kintera.org/schlep16 .

BEHIND THE MUSIC Ken Giustino is the Producer of the Montauk Music Festival May 19-22. Good News attends this great event and interviews many of the musicians and attendees. What a great time in Montauk! The End and the Beginning:)
Next Post: Hip Hop Belly Dance