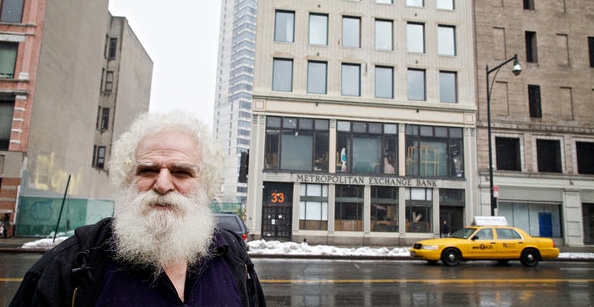 Al Attara in front of the the Metropolitan Exchange building on Flatbush Avenue. He has owned the building for 32 years.

When Al Attara bought a former bank on Flatbush Avenue in Brooklyn 32 years ago for under $250,000, he envisioned it as a complex in which artists, architects and furniture designers would work side by side and share ownership of the 45,000-square-foot space.

But Mr. Attaras plans languished, in part because the bank building was declared part of the Brooklyn Center Urban Renewal Area, meaning that the city could reclaim it at any time. Only now four years after he learned that the city had no plans to acquire the property is his vision coming to life.

A menagerie of creative entrepreneurs occupies the seven-story building, now known as the Metropolitan Exchange, or MEx, including biotechnologists, ecologically minded architects, organic fashion designers and even miniature-cupcake makers. Most came in search of cheap rent which runs to around $400 per desk per month and a place to hatch their start-ups. The open floor plans, communal kitchens and Mr. Attaras philanthropic nature have made for an unusually symbiotic work environment, tenants say.

Once we get more people, said Mr. Attara, I want to rename it the Brooklyn Arts and Design Arena or BADA. Since were in the BAM District, itll be BADA-BAM. The Brooklyn Academy of Music Cultural District encompasses the blocks around Flatbush Avenue, Fulton Street and Hanson Place. At present, the building, at 33 Flatbush Avenue at Livingston Street, is only 50 percent occupied. But the seventh floor offers a glimpse of the future.

Here a dozen ecological and technology entrepreneurs work in constant collaboration. Amanda Parkes, a co-founder of a biofuel start-up called Bodega Algae, also designs what she calls parasitic energy costumes that capture energy generated by the body in motion. So when a Parisian dance company commissioned costumes for a performance this winter, Ms. Parkes solicited the help of James Patten, an interactive designer, and Jessica Banks, a roboticist, who sit 15 feet away.

I feel like this space contains all the skill sets I would ever need to get anything done, Ms. Parkes said. In a competitive work environment like New York City, to find free labor and open advice is incredibly valuable. And comforting, too.

Mitchell Joachim, an ecological architect and one of three TED fellows (for technology, entertainment and design) on the floor, likens the Metropolitan Exchange to a modern-day version of Bauhaus, the German design school. People here have enormous credentials and potential to succeed, Mr. Joachim said. Plus the rent is ridiculously cheap.

Mr. Joachims nonprofit design collective, Terreform ONE, promotes green initiatives in cities. Its conceptual projects are on display, including One-Day Tower, a model of a 53-story building built from all the trash produced by New York City in 24 hours.

Mr. Attara, a former ecological designer who also owns three residential buildings on Atlantic Avenue, shares his tenants passion for recycling and re-use. When new people move into the building, I say, Lets go shopping, he said. By shopping he means rooting through the vast stockpile of reclaimed furniture and semifunctional debris he has collected and stored throughout the building over 32 years.

Much of his collection is eccentric. Visitors entering the first-floor lobby will encounter, for example, a fortune-telling weight scale, props from a Randy Newman musical and a pommel horse. This is my Rosebud, he announced on a recent visit, unveiling an ornate horse-drawn sleigh from the 1890s.

But tenants put many of these objects to use. Paul Sladkus, the founder of Good News Broadcast, outfitted his fourth-floor TV studio with curtains from the Biltmore Hotel and a wooden room divider Mr. Attara rescued from the old Engineers Club at Grand Central Station.

MExs double life as a castoff furniture warehouse recalls the buildings original incarnation as the B. G. Latimer & Sons Furniture Company. Built in 1917, the building, with its fireproof neoclassical design, was described by The Brooklyn Daily Eagle as one of the finest commercial structures in Brooklyn.

In 1929, the Corn Exchange Bank took over the first floor, later merging with the Chemical Bank to become the Chemical Corn Exchange Bank. The upper floors held decorating shops and printing presses. Mr. Attara has a photograph of the Brooklyn Dodgers parading past the building after winning the 1955 World Series, rolls of toilet paper flying from the third-story window.

But when the urban renewal plan was approved in 1970, the building emptied. After Mr. Attara took over in 1978, he rented studio space to poor starving artists, he said.

A few of those artists have remained. Jason Rogenes, an installation artist who builds hanging sculptures of plastic foam that resemble spacecraft, has kept a drafty studio on the first floor since 2000. On cold nights, instead of walking home, he has occasionally crashed in an insulated air duct, he recalled.

The transformation of 33 Flatbush into MEx occurred in 2006, after Mr. Attara ran into a friend from the New York City Economic Development Corporation who explained that the city did not intend to develop his building. That left Mr. Attara free to go after longer-term tenants.

It is not unusual for urban renewal plans to list properties proposed for acquisition where the properties are never actually acquired, Eric Bederman, a spokesman for the citys Department of Housing Preservation and Development, wrote in an e-mail.

Interboro Partners, an urban design and research firm, became Mr. Attaras first substantial tenant. Shortly after, the words Metropolitan Exchange Bank were affixed to the concrete facade during a film shoot for Definitely, Maybe, a romantic comedy starring Ryan Reynolds. Members of Interboro liked the sound of Metropolitan Exchange, and registered the name.

Tenants say that MEx follows the principles of a gift economy. Heating and plumbing repairs, for instance, can be exchanged for discounted, or even free, rent. But increasing property values in the area have caused Mr. Attaras real estate tax to soar (it reached $180,000 in 2008), forcing him to borrow from friends and family. In 2009, he took in only around $120,000 in rent, he said

To make MEx work financially, he said, he intends to install an anchor tenant (preferably a food emporium, with chefs, farmers and food people) on the ground floor, and rent the fourth floor to a civic-minded small business.

In keeping with his original vision, he has turned down several law firms, despite the much-needed revenue they would provide. They just wanted square footage and privacy, he said, and privacy doesnt really exist here.

He also declined a $20 million offer from a development company that wanted to erect a 45-story residential tower in MExs place and rent the first level to a big-box store. He insists MEx remain an incubator for incubators.

Some of their ideas have already hatched. Crop to Cup, an organic coffee importer, recently moved into a large storefront on Third Avenue in Gowanus after two years on the fifth floor.

We outgrew the space, in a good way, said Taylor Mork, a co-founder. We were getting 1,000-pound shipments of coffee beans, and we wanted a coffee lab and a retail space.

Should the building reach a critical mass, Mr. Attara intends to offer tenants collective ownership of the building, though he has not made a formal proposal, he said. For now, he is collaborating with some of them to raise money for the space. With the help of EcoSystems, a sustainable furniture company on the seventh floor, he recently built a teak dining table that converts into a love seat. One hundred copies are being fabricated in Indonesia.

Were calling it the BADA table, Mr. Attara said with a grin.