You are here: Home / Living & Learning / Education / PARA-ATHLETE CYCLIST SHARES HOW SHE FOUND HERSELF BATTLING FOR HER LIFE

Listen to “PARA-ATHLETE CYCLIST SHARES HOW SHE FOUND HERSELF BATTLING FOR HER LIFE” on Spreaker. 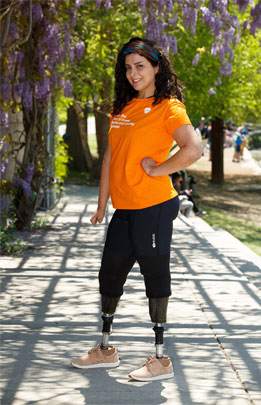 Hear How Jamie Schanbaum’s Experience Gave Her a New Mission:
Educating Others About Meningitis Vaccination

Para-athlete and GSK spokesperson Jamie Schanbaum understands struggle.
She knows what it’s like to train for the Paralympic Games and channel her pain into perserverance—winning a gold medal at the U.S. Paralympic cycling games. Years before her games, Jamie went through another battle— fighting for her life after contracting meningococcal disease, also known as meningitis.

Jamie was a college sophomore when, in 24 hours, she went from feeling completely healthy to feeling like she had the flu, to being rushed to the emergency room where she found out she had contracted meningitis. Jamie spent seven months in the hospital, ultimately losing both of her legs below the knees, and all of her fingers due to the disease. Although uncommon, meningitis can be a serious illness that can cause life-threatening complications, or even death.[i] Jamie’s athletic fortitude was born out of her fight against meningitis.
Jamie is sharing her story as an advocate for GSK’s public health campaign, “Ask2Bsure” to educate and empower parents of teens and young adults ages 16-23 to start the conversation with their child’s doctor and “Ask2Bsure” they have received vaccination for meningitis B. There are two different types of vaccinations that can help protect against the 5 vaccine-preventable groups of meningitis, and while many colleges require meningitis ACWY vaccination, meningitis B vaccination has only been available since 2014, and most colleges still do not require it.[ii],[iii]

DID YOU KNOW?
• The Centers for Disease Control and Prevention (CDC) recommends a meningitis B vaccination series for teens and young adults ages 16-23 years (preferred age 16-18 years) on the basis of shared clinical decision making- to help protect against meningitis B.[iv] • Meningitis is an uncommon, but serious illness that can cause life-threatening complications, or even death.1 Early symptoms of meningitis may be similar to those of the flu, but can progress quickly and can be fatal.[v],[vi] • Up to 1 in 5 meningitis survivors suffer long-term consequences, such as brain damage, amputations, hearing loss and nervous system problems.[vii] Among those who contract meningitis, 1 in 10 will die, despite treatment, sometimes in as little as 24 hours.2
• Teens and young adults are at an increased risk for contracting meningitis because it can spread through certain common behaviors such as living in close quarters like college dorms, kissing, and sharing drinks or utensils.1
• From 2011 through March 2019, meningitis B caused all US college meningococcal outbreaks, which involved 13 campuses, 50 cases, and 2 deaths among an at-risk population of approximately 253,000 students.[viii] Although vaccination may not protect all recipients, it is the best way to help prevent meningitis B according to CDC.[ix]

What Does Peace Mean to Chuck Lichtman?
Next Post: Alzheimer’s and Summer: 5 tips for caretakers to help navigate the hot, summer weather