Welcome to Peace Sunday Festival 2014, www.peacesunday.org and www.udcworld.org organized by the Unity-and-Diversity World Council.  Keynote speaking include Marianne Williamson, Yuval Ron, International Peace Choir. This will be our third year at the IMAN Cultural Center, where we have found a warm welcome and a great deal of support.  This year’s event finds our world in a vast amount of turmoil and unease.  It is a most important time to hold a meaningful Peace Sunday that will help provide us with inspiration, courage, and some tools for how to deal with helping to create a sustainable peace on planet earth.

MISSION
To establish and sustain a local-to-global cooperating body of individuals, groups, and networks for the pursuit of peace, justice, and an environmentally sustainable civilization for all races, cultures, and religions based on universal ethical and spiritual principles. 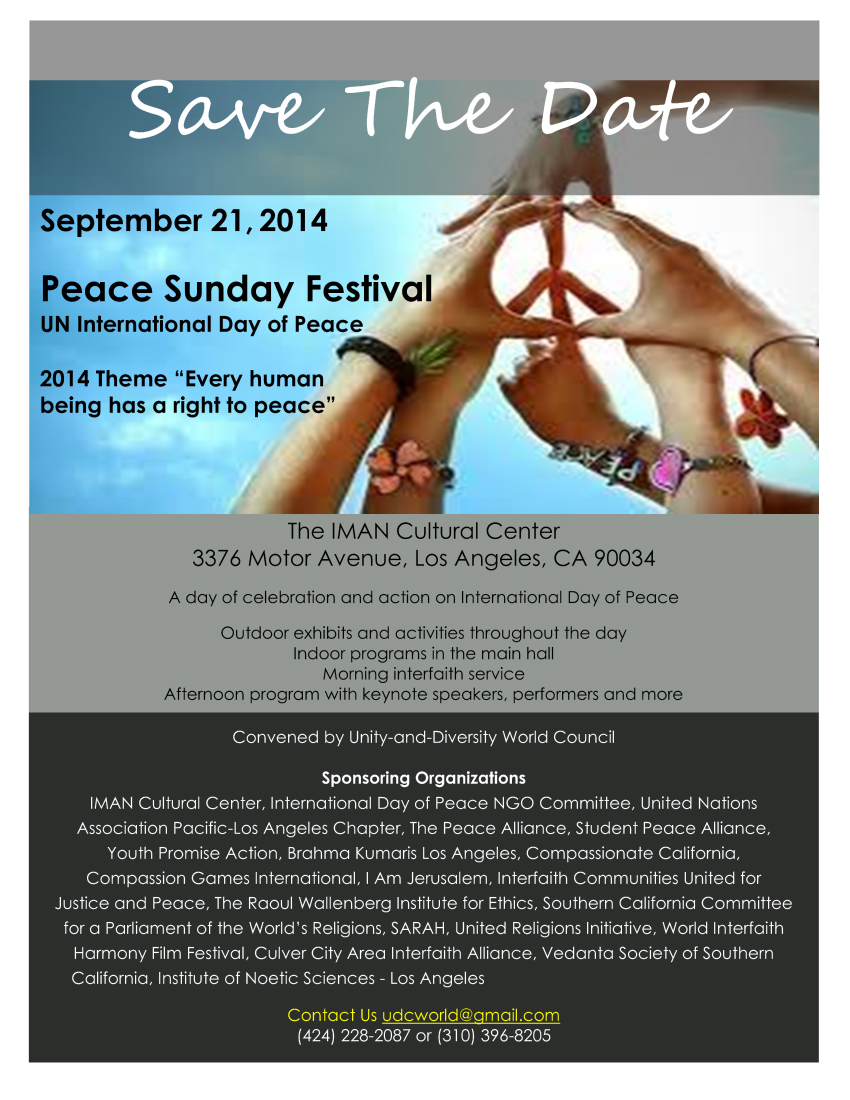 Leland Stewart was born on March 4, 1928, in Detroit, Michigan.  I was an only child, because my mother’s health was such that she chose not to have any more children.

One of my ways of going beyond the role of being an only child was to go to summer camp each summer for seventeen years, where I had some wonderful experiences in camping and in camp counseling.  I started playing the trumpet at age nine, and in summer camping I was able to play the needed bugle calls, plus I often played songs after taps on numerous occasions.

At the youngest possibly age I joined the Boy Scouts and became the youngest Eagle Scout in Detroit.  I learned a great deal about Scouting and very much liked being in the Scouts.

Musically speaking, I had many wonderful experiences from the time I started playing trumpet, all the way through to the present time.  I played in the elementary school band and orchestra, as well as the high school band and orchestra.  In college I had my own dance band at the University of Michigan.  Likewise, I played in the University of Michigan concert and marching bands.  I studied with the first and second chairs of the Boston Symphony, as well as an outstanding cornet soloist in Detroit.  In addition, I played in the Harvard Orchestra.  More recently, I developed a unique style of music which particularly fits for services of worship; it is like jazz in some ways but is more sacred in style and also less rhythmical.

At the University of Michigan I completed two undergraduate degrees; one in Mechanical Engineering and a second in Mathematics.  I had expected to go to the Harvard Business School but was turned down twice, at the end of which I felt called to go to the Harvard Divinity School and was accepted there.  I graduated with high grades in three years and was able to serve two churches during that time.  The second one was the Second Unitarian Church in Salem, Massachusetts, where I met my future wife, Elizabeth Elliot.  We were married on June 13, 1953.

Elizabeth and I came to California in 1955 with our first child, and I soon began serving as the organizing minister of a Unitarian Universalist church in Claremont.  We stayed there until they broke ground for the church, and then I was called to serve the Universalist Church of Hollywood.  During our time in Claremont, I became the chair of the committee to produce a Festival of Faith in Bridges Auditorium in April, 1956, which drew more than 2,000 people in recognition of the tenth anniversary of the United Nations.

This began our effort to relate to the work of the U.N.  In 1965 the U.N. celebrated its twentieth anniversary, which was the birth date of the International Cooperation Council, the predecessor of the present Unity-and-Diversity World Council (UDC), whose founding was part of International Cooperation Year 1965, initiated by the General Assembly of the United Nations.  Thus our U.N. connection was right from the beginning of UDC.   Next year, 2015, the United Nations celebrates its 70th anniversary, and the UDC celebrates its 50th anniversary.

While at Harvard Divinity School, I began writing the World Scriptures, which meant delving into the scriptures of the major religions and also more recent religions and spiritual movements as well.  It took fifty-three years to get that book published, which came about through the help of singer Carl Hult and two of his relatives.  World Scriptures, Vol. 2 was born because the new material that was supposed to be in World Scriptures was not published because most of the material was not from the major religions.  Instead, it was published separately by AuthorHouse.  At about the same time the book Science and Spirituality was developed and published by AuthorHouse with the help of Rev. Dr. Mary Mann and a number of others who made the selection of quotations that are the central part of the book.

In 1982 the United Nations had a Special Session of its General Assembly focused on disarmament, and in Southern California we formed a committee and put together a Festival of Faith in the Hollywood Bowl in support of that event.  12,000 people attended that event, which had sixty sponsoring and co-sponsoring organizations.

Four years later, the United Nations held a second Special Session of its General Assembly on Disarmament, and a Year of Shalom Committee was formed in Southern California in support of that event, which is when Peace Sunday was born.  Almost 100,000 people attended that event in the Rose Bowl.  UDC was given the materials from that event, and we have been holding smaller Peace Sunday events annually from 1999 to the present.  It appears that the interfaith community is gaining the cooperative strength to start producing larger, more inclusive Peace Sunday type events starting this year and especially for next year’s U.N. 70th and UDC 50th anniversaries.

Elizabeth Stewart, my late wife, was a great supporter of our various events and other activities ever since we got married until her death from cancer in 2009.  I have been carrying on the work since then and am looking forward to its continuance.  Whether I will eventually have a new wife to share my life with, only time will tell.  In the meantime, the work continues and increases in its different aspects and the efforts involved.

In closing, I would just like to mention two new efforts that have been started and are demonstrating their importance.  First is the Culture of Peace Series, which began in 2012 at a Peace Convergence as part of our Peace Sunday weekend.  It is a monthly series based upon the development of UDC’s Peace Wheel, focusing the different dimensions of peace.

The second new program is now called Gatherings of Creative Community, which have just gone public on Sunday mornings.