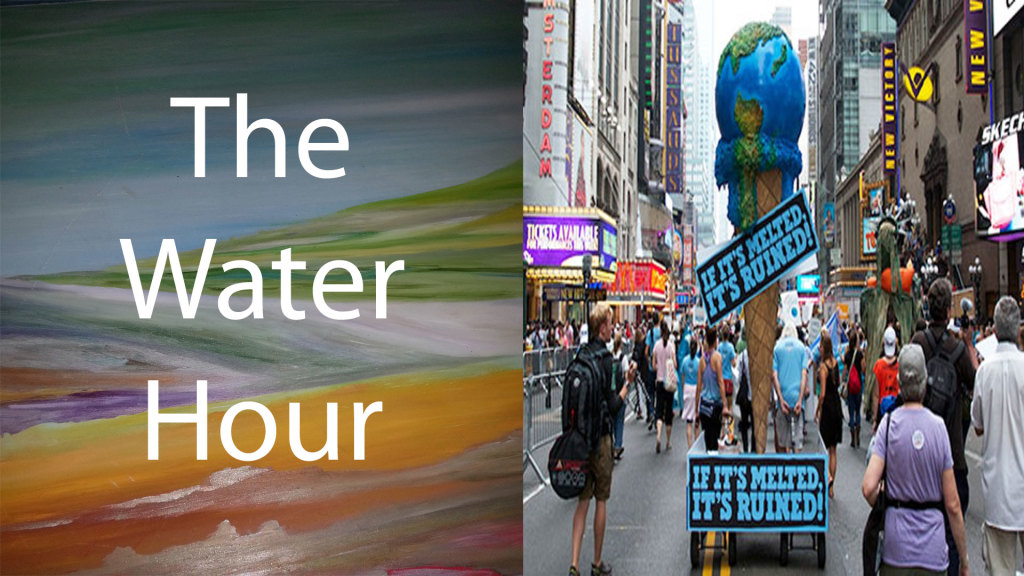 September 21, 2014. Good News and Ben and Jerry’s are the last groups at the March. Ben and Jerry’s globe stated if it is melted it is ruined. We here at Good News with our series, The Water Hour are fully aware of the concerns of WATER. We helped create World Water Day at the UN with our associate Phil Sauers of the World Water Rescue Foundation. Our participation at the march was for Peace and for Water, in fact we feature a song that Pete Seeger titled Water not Weapons. Go to www.goodnewsplanet.com

Here is a link to the Ben and Jerry story. http://www.benjerry.com/whats-new/climate-march-recap

The People’s Climate March –
This is just the beginning
September 25, 2014
On September 21st, 400,000 people took to the streets of New York City to demand action, not rhetoric, from the world leaders who would take part in the UN Climate Summit two days later. The NYC march was joined by 2808 supporting events in 166 countries, making the People’s Climate March the biggest climate change mobilization in history.
Even for Manhattan, a borough known for bombastic size, the scale was staggering, with the march assembly alone taking up 21 city blocks on the west side of Central Park. The significance of the day brought out celebrities including Leonardo Decaprio, climate luminaries including Al Gore, UN Secretary-General Ban Ki-Moon, and NYC mayor Bill Deblasio (who just passed major green legislation, committing his city to an 80 percent cut in greenhouse gases by 2050).

But the real heroes were the everyday people from all walks of life and all parts of the world. The breadth of backgrounds, ethnicities, ages and viewpoints represented a sea change in the size and diversity of the climate movement.
“This issue has become so urgent for people that hundreds of thousands turned out in the streets,” says Chris Miller, Ben & Jerry’s Social Mission Activism Manager. “There was a sea of people as far as the eye could see in either direction.”
“We are seeing a broad range of unusual suspects— trade unionists, religious leaders, indigenous peoples,” adds Kumi Naidoo, Greenpeace’s International Executive Director. “Why we are reaching larger numbers is that we are saying climate change is not solely an environmental issue— it’s a survival issue.”
Flying banners of all colors, shapes and messages, the march was a spectacle that even New Yorkers couldn’t ignore. Fresh signs like “It’s getting hot in here, so take off all your coals,” and “the revolution will not be motorized,” combined outrage and humor, while Ben & Jerry’s own “If It’s Melted, It’s Ruined,” float designed by Russ Bennett, drew constant comments. At least 20 busloads of Vermonters were on location, from the Tar Sands-panning performance of Bread and Puppet, to anti-nuclear contingents, student and municipal groups and individuals on the move.

Under a muggy but rain-free sky, the marchers poured through Manhattan’s cavernous avenues and streets, their cheers and drumrolls a stark contrast to the glitz of the upper west side and the big screen excess of Times Square. Just before 1 pm, a pre-planned wave of silence swept from the front of the march over 20 blocks north, as everyone paused with their hands raised high overhead in remembrance of lives and homes lost to climate change related catastrophe. The poignancy of such a concentrated quiet in an otherwise noisy city sobered even the NYPD on crowd control duty. A few minutes later, a whistle swept up the march, leading a rolling cry as 400,000 plus people participated in the climate action alarm.
At the 11th Avenue and 34th Street finish line, the tired dispersed while many lingered on, dancing, talking and eating at a multi-block street fair. A week prior, scientists at the National Oceanic and Atmospheric Administration reported that this past summer set the record for the hottest in global history, with 2014 likely to break the record as the hottest year ever.
“Businesses have an incredible amount of influence with policy makers,” says Miller, “they need to join citizens in taking a stand on climate change. If we all come together and take action, it’s an incredibly positive vision for the future that I see for us.”

The People’s Climate March was an unparalleled success, drawing in over four times the number of people as expected, according to event organizers 350.org, all with the goal of demanding definitive change from our governments. With the next United Nations Climate Change Conference scheduled to take place next December in Paris, it’s never been more critical to keep the momentum going by clicking over to organizers like 350.org and getting involved.
“This is just the beginning,” says Miller. “The next 14 months are incredibly important— we need to go from 400,000 in New York City, to a million people in Paris next year. We need to really put pressure on world leaders to act with ambition on climate change.”

We wanted to create a Human Peace Sign at the end, but ran out of steam, from our own events in San Jose and Central Park.

I didn’t realize that Ben and Jerry’s group was directly in front of us. They are socially responsible