PHOTOGRAPHY: Angelina Jolie was ‘fearless’; the making of an homage

You are here: Home / All We Need Is Love / Good Samaritans / PHOTOGRAPHY: Angelina Jolie was ‘fearless’; the making of an homage

THE BIG TOPIC:
PHEROMONES—AND A PHENOMENON 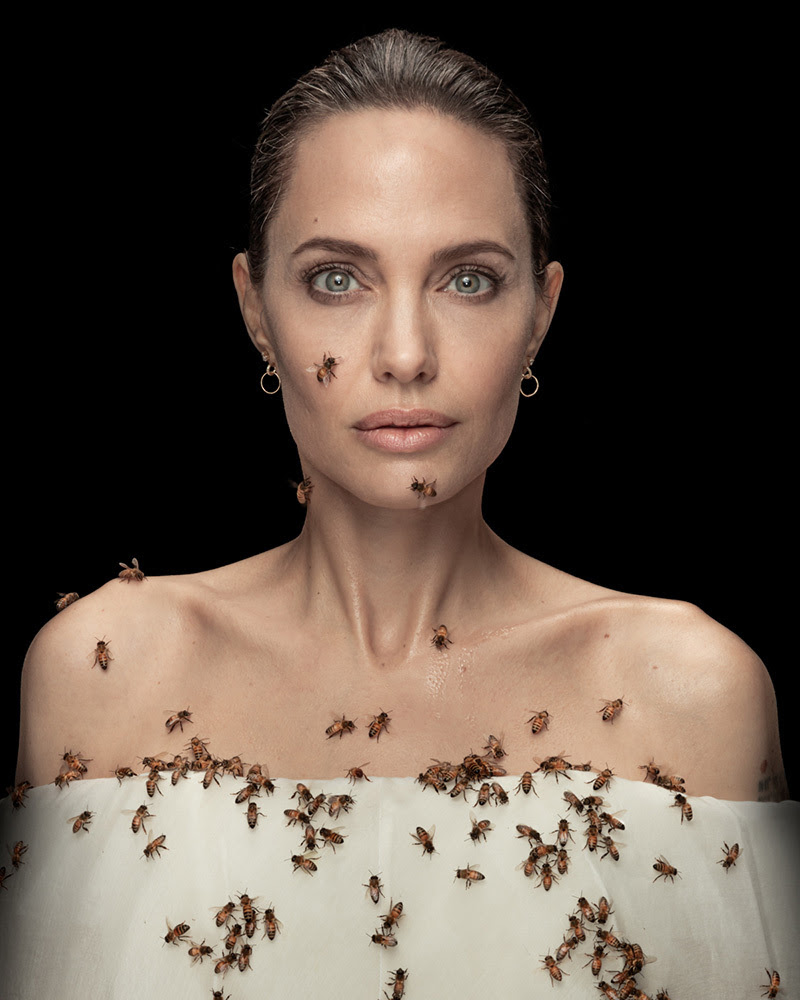 “I’ve never been so nervous, ever, on a shoot.”

Not words that instill confidence in a Director of Photography, especially from the photographer you commissioned to photograph Angelina Jolie covered in honeybees for World Bee Day.

But I never doubted that Dan Winters was the right photographer for the job. He can manage a celebrity. And he’s a beekeeper himself, who got his first apiary at age 9. His obsession with insects continues, as reflected in these stunning bee portraits shot on the scanning electron microscope and the three hives he keeps as a self-proclaimed “gentleman beekeeper.”

Dan enlisted friend and beekeeper Konrad Bouffard on this project and together they ran several tests outside Dan’s studio in Austin. “I don’t remember ever being as thorough with the prep,” he said. But when the test shots using lemongrass to attract the bees weren’t working, Dan took a page from photo history.

He started researching Richard Avedon’s Beekeeper, arguably his most recognized portrait, and part of Avedon’s epic American West project. He found an article that identified the entomologist who worked with Avedon on that 1981 image—and Konrad went on an “insane detective mission” to track him down.

Konrad did—and the 87-year-old entomologist gave Konrad Polaroids and letters from the original shoot—as well as the attractant they used for the bees. “Literally the same jar of queen pheromone!” Dan said. Dan and Konrad arrived on set early the morning of the shoot to test the 40-year-old queen bee pheromone before Angelina showed. It worked.

Walking on set, Angelina moved within six inches of a swarm ball of 60,000 of them. “She was some kind of fearless,” Dan says.

She didn’t wear bee protection, and came unshowered, because bees attack scents. “I told her, ‘You need to smell like an organism.’”

Angelina posed for 18 minutes, staying focused even as one bee crawled under her dress and was climbing up her thigh. “She never once even flinched,” Dan says. “There was never a moment of like, ‘Ooh,’ or anything. It was like she’d just kind of done this her whole life and this was sort of this laissez-faire experience for her. And I was incredibly impressed by that. I was the only person on the crew that didn’t wear any protection. I kind of did it in solidarity.“

Dan and Angelina set out to make an image that would honor the bees. And, after the prep and research, they collaborated on an image that pays homage as well to Avedon—both to his original Beekeeper photograph and to the technique used to create it. Oh, and this new image has become a phenomenon, getting 2.4 million likes on our Instagram page in a day.

“I like to think that if I were 97 years old and someone re-created one of my images, I would be deeply touched,” Dan says. “So hopefully he would have thought the same.”

Do you get this newsletter daily? If not, sign up here or forward to a friend.

Thought of the day
Next Post: One Million Americans Are Hospitalized Every Year For Heart Failure