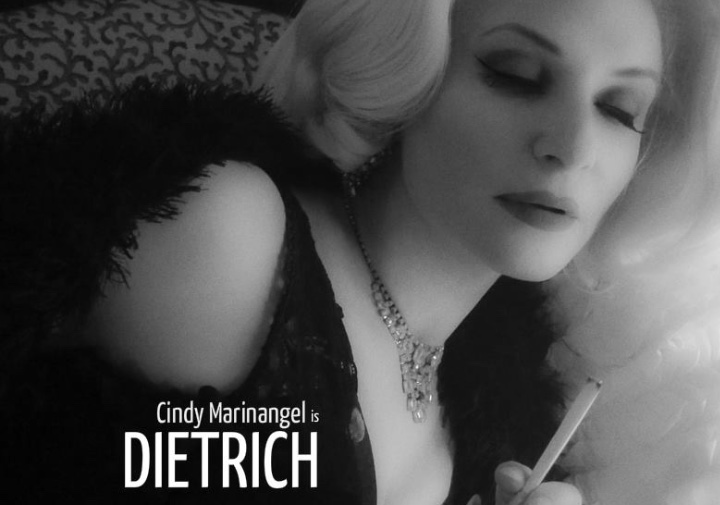 “Dietrich” will play Sunday, Jan. 6 at 3 p.m. and Monday, Jan. 7 at 7 p.m. The Triad, a celebrated and historic Off-Broadway theater located at 158 W. 72nd St. Visit www.dietrichplay.com for more information and to buy tickets.

Written by Willard Manus, directed by Gary Swanson,accompanied by pianist Russell Daisey and starring Cindy Marinangel, “Dietrich” is a based on a true story. Set in May 1960, the play takes place when the actress returned to the Berlin stage for the first time since fleeing the Hitler regime in the 1930’s. Inside her dressing room at the Tatiana Palast Theater, Dietrich weighs whether to go through with the live performance despite threats on her life by Nazi sympathizers who resented her for having spent much of World War II entertaining American soldiers on the front lines. To them, Dietrich is a turncoat; a traitor who deserves to be shot and killed on stage.

“Dietrich” (formerly known as “Marlene”) celebrated its world premiere at the Brickhouse Theatre in Los Angeles, debuted in New York at the Hudson Guild Theatre as part of the New York Theatre Festival’s annual Winterfest and was selected for the New York New Works Theatre Festival. The play also had an earlier successful showing at The Triad.

Cindy Marinangel is a Lifetime Member of The Actors Studio and is a graduate of the Chicago Second City Conservatory. Marinangel was recently seen in “Beverly Hills Christmas,” a holiday film starring actor Dean Cain that airs seasonally on UPtv.

Gary Swanson is a director, actor, teacher, author and artist. He studied with Lee Strasberg and is a Lifetime Member of the Actors Studio. He produced and starred in “Whiskey School,” which is about the intervention of late playwright Leonard Melfi. Swanson in 2006 founded the Montauk Group, an intensive acting workshop and residency program held every summer in Montauk, New York.

Hi All-
Here is the final press release! (Thanks Maggie!)

Thanks for getting it on the website Lou and Paul for doing what you can!!

Maggie please send to Gary Springer and ask him to do another special invite.

We need reviewers…. and tickets sold.

Paul- I have postcards to pass out at the Theatre if you can pop by or meet me?