You are here: Home / All We Need Is Love / Relationships and Self / PRIDE MONTH SPECIAL – University Professor and LGBTQ Youth Safe Space Initiative Founder at Stockton University by Dr. Laurie Greene 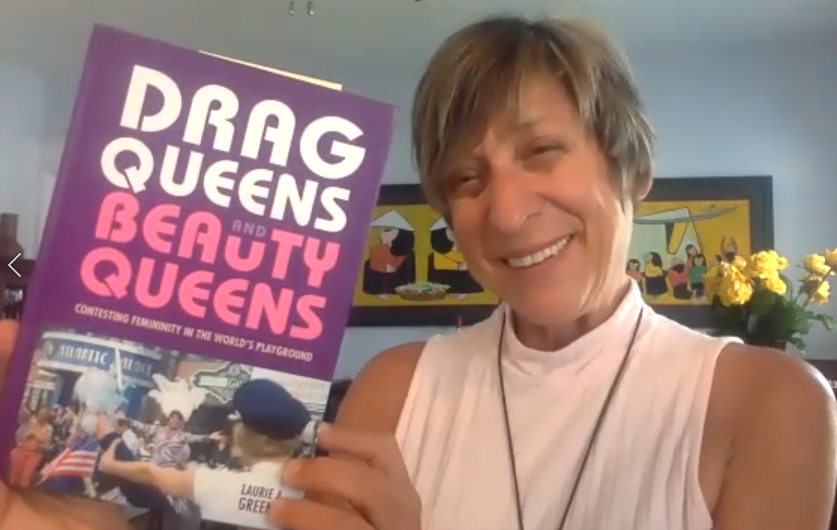 The Miss America pageant has been held in Atlantic City for the past hundred years, helping to promote the city as a tourist destination. But just a few streets away, the city hosts a smaller event that, in its own way, is equally vital to the local community: the Miss’d America drag pageant.

Drag Queens and Beauty Queens presents a vivid ethnography of the Miss’d America pageant and the gay neighborhood from which it emerged in the early 1990s as a moment of campy celebration in the midst of the AIDS crisis. It examines how the pageant strengthened community bonds and activism, and how it has changed now that Rupaul’s Drag Race has brought many of its practices into the cultural mainstream. Comparing the Miss’d America pageant with its glitzy cisgender big sister, anthropologist Laurie Greene discovers how the two pageants have influenced each other in unexpected ways.

Drag Queens and Beauty Queens deepens our understanding of how femininity is performed at pageants, exploring the various ways that both the Miss’d America and Miss America pageants have negotiated between embracing and critiquing traditional gender roles. Ultimately, it celebrates the rich tradition of drag performance and the community it engenders.
On your program, Laurie can answer questions like:

What are “camp sensibilities” in drag performance and gay culture?

The book explored the personalities of the pageants. Can you give us a flavor of them?

What is the importance of camp in missed America? Drag style, performance, and language.

Tell us about the queering of the miss America pageant? Did anybody work on both?

How do each of the four areas of competition differ on the page TA — swimsuit, evening gown, talent, and interview. There is an object and a subject section.

Who owns the pageants?

What is the Show Us Your Shoes Parade?

Do you see the talent on both sides sharing hard work, perseverance, and talent?

You mentioned that drag is part of the gay community in AC but it has a male focus. Explain?

Talk about the conflicts you found between the gay community and the drag community.

“An unprecedented look at drag culture and its history in Atlantic City. A must-read for queens and their fans!”

“I have long wondered how the Miss America pageant maintains a conservative appeal while ignoring the known influence and involvement by the gay community. If you’ve ever known or loved Miss America, you need this history lesson.”

“After 30 years in the drag business, I was surprised and elated to learn so much about drag/LGBTQ+ history in Atlantic City. The in-depth exploration of how Miss America and Miss’d America were connected and disconnected is fascinating.”

“Through a highly entertaining, insightful, and informative combination of history, ethnography, and gender studies, Greene uncovers the long-standing influence that Atlantic City’s LGBTQ+ community has had on the Miss America Pageant.”

“The subject matter is fascinating.”

Thought For The Day…
Next Post: What does Peace mean to Dr. Laurie Greene?