“Turn On The Love” interview with Greg Behrendt

You are here: Home / All We Need Is Love / Relationships and Self / “Turn On The Love” interview with Greg Behrendt

Greg Behrendt is a lifelong comedian who accidentally became the best selling co-author of the inescapable He’s Just Not That Into You. Host of the Greg Behrendt Show, he’s also the musical force behind America’s instrumental surf and ska combo, the Reigning Monarchs. His comedy resume features HBO’s Mantastic, Comedy Central Presents and Uncool, seen exclusively on Comedy Central, as well as many appearances on late night shows like The Tonight Show with Jay Leno, The Late Show with David Letterman and Late Night with Conan O’Brien. He was also named by Variety as one of the 10 Comics to Watch.

This is not a joke! Getting close to people isnt just about words of love and gifts from the heart. Greg sets the record straight in a way that only he can touching on surprising findings from a new survey on the role of technology on love and family relationships. 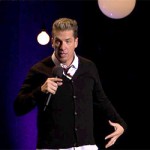