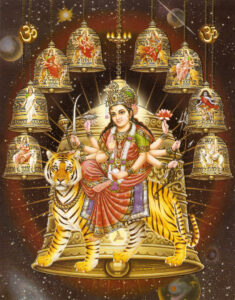 The seeds of inner renewal are sown, sprouting, watched & worshiped by devotees during Navratri and on the 8th, 9th and 10th days, Goddess Durga, Mahanavami and Vijayashtami are worshipped. The tenth day that is commonly referred to as Vijayadashami or “Dussehra”, celebrates victory of Shakti over Mahishasura, of Lord Rama over Ravana, and of Durga over demons like Madhu-Kaitav, Chanda-Munda and Shumbha-Nishumbha; that is victory of good over evil.

The last 3 days of Navratri are called Durgashtami (8th day), Mahanavami (9th day) and Vijayadasami (10th day). On the morning of the tenth day there is a fire ceremony dedicated to Shiva, where the Navaratri participants have a chance to receive Shiva’s blessing.

The beginning of spring and the beginning of autumn are considered to be important junctions of climatic and solar influences. That is why these two periods are taken as sacred opportunities for the worship of the Divine Mother Durga. The dates of the festival are determined according to the lunar calendar.

Navratri is a very important and major festival in the western states of India: Gujarat, Maharashtra, and Karnataka during which the traditional dance of Gujarat called “Garba” is widely performed. This festival is celebrated with great zeal in North India as well, including Bihar, West Bengal, Madhya Pradesh and the northern state of Punjab.

Durga, the Mother Goddess of the Hindus and a form of Devi and Shakti, is believed to have manifested in various forms, and Navadurga Maa are believed to be the most sacred aspects of Goddess Durga.

According to a Hindu tradition, it is believed that there are three major forms in which Goddess Durga manifested herself, namely, Mahasaraswati, Mahalakshmi and Mahakali who are the active energies (Shakti) of Brahma, Vishnu and Rudra respectively (without these goddesses the gods will lose all their powers).

These three forms of Durga further manifested in three more forms each, and thus emerged the nine forms of Durga, which are collectively called Navadurga or Nine Durgas:

Devi Maa Shailputri – The Navratri commences with the 1st night devoted to the puja of Maa “Shailputri”. “Shail” means mountains; “Parvati”, the daughter of king of Mountains Himavan, is known as “Shailputri”. Her 2 hands, display a trident and a lotus. She is mounted upon a bull.

Devi Maa Brahmacharini – One hand holds a “Kumbha” or water port and the other rosary. She personifies love and loyalty. Maa Brahmacharini is a store-house of knowledge and wisdom. Rudraksha is her most adorned ornament.

Devi Maa Chandraghanta – Worshipped on the 3rd night this Maa Durga “Shakti” is astride a tiger, displays a golden hue to Her skin, possesses ten hands and 3 eyes. Eight of Her hands display weapons while the remaining two are respectively in the mudras of gestures of boon giving and stopping harm. Chandra + Ghanta, meaning supreme bliss and knowledge, showering peace and serenity, like cool breeze in a moonlit night.

Devi Maa Kushmanda – The 4th night begins the worship of Maa “Kushmanda”, possessed of eight arms, holding weapons and a mala or rosary. Her mount is a tiger and She emanates a solar like aura. “Kumbh Bhand” means to see cosmic vivacity in Pindi shape or knowledge of cosmic intricacies in human race. The abode of Maa “Kushmanda” is in Bhimaparvat.

Devi Maa Skandamata – Using a lion as a vehicle She holds her son, “Skand” in her lap while displaying 3 eyes and 4 hands; two hands hold lotuses while the other 2 hands respectively display defending and granting gestures. Its said, by the mercy of Maa “Skandmata”, even the idiot becomes an ocean of knowledge such as “Kalidas”.

Devi Maa Katyayani – As mother, Maa “Katyayani” stayed in the Ashram of sage Katyayan for penance, hence She named as “Katyayani”. This 6th Shakti is also astride a lion with 3 eyes and 4 arms. One left hand holds a weapon and the other a lotus. The other 2 hands respectively display defending and granting gestures. Her complexion is golden coloured.

Devi Maa Kalaratri – Black skin with bountiful hair and 4 hands, 2 clutching a cleaver and a torch, while the remaining 2 are in the mudras of “giving” and “protecting”. She is mounted upon a Donkey. The destroyer of darkness and ignorance, Maa “Kalaratri” is the seventh form of Nav-Durga meaning scourer of darkness; enemy of darkness. Maa Kalaratri’s famous shrine is in Calcutta.

Devi Maa Mahagauri – Four arms with the fairest complexion of all the Durga Shaktis. Peace and compassion radiate from Her being and She is often dressed in a white or green sari. She holds a drum and a trident and is often depicted riding a bull. Maa “Mahagauri can be seen in a temple at Kankhal near pilgrim centre Haridwar.

Devi Maa Siddhidatri – Ensconced upon a lotus, most commonly, with 4 arms, and is the possessor of 26 different wishes to grant Her bhakts. Maa Siddhidatri’s famous pilgrim centre, is located in Nanda Parvat in the Himalayas.

The nine manifestations of Maa Durga that are worshiped with fervor during Navratri, are believed to lift divine spirit in us to help us overcome obstacles and get liberated from unnecessary qualities to be filled with new freedom and purity.

All these nine names of Goddesses are decribed in “Devi Kavacha” of the Chandipatha scripture. Also called The Devi Mahatmyam or Devi Mahatmya (“Glory of the Goddess”) it is a Hindu religious text describing the victory of the goddess Durga over the demon Mahishasura. As part of the Markandeya Purana, it is one of the Puranas or secondary Hindu scriptures, and was composed in Sanskrit around c. 400-500 CE, with authorship attributed to the sage (Rishi) Markandeya. Devi Mahatmyam is also known as the Durga Saptashati or Chandi Patha.

The other important work that focuses on veneration of the divine feminine is Devi Bhagavata Purana (“The Old Book of the Goddess”), also known as Shrimad Devi Bhagvatam or the Devi Bhagavatam.