Reid Stowe And Media For Humanity (part 1 of 2)

You are here: Home / Show Channels / The Water Hour / Reid Stowe And Media For Humanity (part 1 of 2) 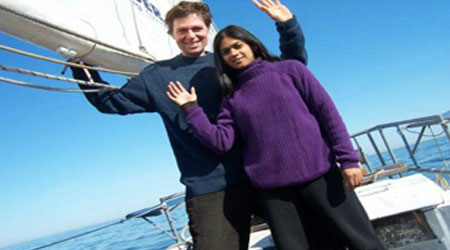 Good News Broadcast announces a new show with Reid Stowe to celebrate his Longest Voyage at Sea (www.1000days.net) , as part of their series the Water Hour.

Our first show was created with some of the wonderful interns form Media for Humanity(www.mediaforhumanity.org) an organization that Good News believes in for many years. Media for Humanity is committed to eradicating child slavery and exploitation in the United States proactively instead of reactively.

GNB broadcast interviews with Reid, Lawrence and Sonyas quest for understanding of the sea, their love and which culminated with Reids return on June 17th, from the 1,000 Days at Sea Voyage. (www.1000days.net.)

At that time Reid, a New Yorker returned After Record 1,152 Days at Sea and saw his two-year old son for the First Time. Good News Broadcast is the Official Broadcaster of the Voyage.

Stowe was accompanied by a flotilla of boats up the Hudson River to Pier 81 (Circle Line/World Yacht pier) where he disembarked at 1 p.m. and stepped foot on land for the first time in over three years. He reunited with his companion, Soanya Ahmad, who sailed with Stowe for the first 306 days of the voyage, but had to leave due to morning sickness. Ahmad now holds the womens record for the longest non-stop sea voyage. Stowe met, for the first time, his son Darshen, who was conceived at sea and is now almost two years old.

Stowe left port April 21, 2007, accompanied by his companion Ahmad. Together they sailed from the Hudson towards the Atlantic on a ship laden with three years worth of food, beans for sprouting, solar panels for energy, large tarps to catch rainwater, a laptop, an Iridium satellite telephone, and a JouBeh satellite tracking unit that would verify the path of the 1000 days voyage (see Google map at www.1000days.net). Stowe survived a collision with a freighter on day 15, endured tough repairs with limited supplies, through the loss of his companion and only crewmember when she had to leave the boat due to nausea, and through the solitary days that followed. Still, Stowe managed to create two large scale conceptual art drawings with the course that he sailed, the shape of a whale in the Pacific and a heart in the Atlantic.

One thousand days is the time estimated for a future mission to Mars, which will have similar attributes of isolation and vessel self-reliance hence the projects name, Mars Ocean Odyssey. Stowes primary motivation is to take exploration on the sea further than anyone has before. Linked to thousands of followers on the Web, on day 638 he writes, it takes more to live at sea than a good boat and all the preparations, skills and psychology than you can imagine. It takes the continued support of the loving consciousness of humankind. Despite numerous mental, physical, and emotional hardships that would have caused another person to head for the safety of the shore, Stowe remains optimistic, finding strength in a deep spiritual connection to the sea.

Visit the official website at www.1000days.net to read daily blogs from the Anne, see her current location, hear audio clips, and much more.

Paul Sladkus, Founder of Good News Broadcast states, Reid, Laurence and Soanya have become part of my soul.I have spoken with them in time of calamity, time of peace and in time of reverence.All are spiritual beings who represent the best in humankind. What an honor for me to share their adventure and broadcast it to the world for many years.To be asked to host parties and homecomings was the icing on the cake and through them the world has learned about determination, sacrifice, the power of the water and the power of the mind.We are all indebted to them for their love of the sea and their knowledge will live on in eternity.

* Modern-day slavery persists largely because it is hidden

PLUS the Power of Students and the Press…