Remembrance event for the Hungarian Composers who perished during the Holocaust. In the presence of H.E. Ban Ki-moon, Secretary General of the United Nations and Madam Yoo (Ban) Soon-taek Hosted by : H. E. Ms. Katalin Annamária Bogyay Permanent Representative of Hungary to the United Nations

You are here: Home / Good News To Go / Remembrance event for the Hungarian Composers who perished during the Holocaust. In the presence of H.E. Ban Ki-moon, Secretary General of the United Nations and Madam Yoo (Ban) Soon-taek Hosted by : H. E. Ms. Katalin Annamária Bogyay Permanent Representative of Hungary to the United Nations 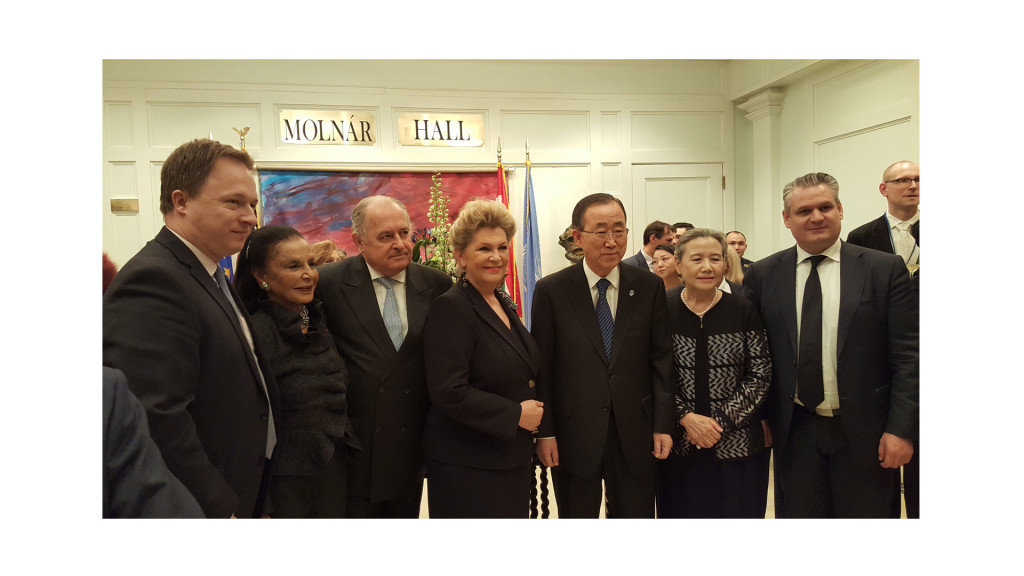 Judith Pisar has devoted her career to building cultural bridges across the Atlantic. As President of Arts France-USA, an organization committed to cultural exchange between the two countries, she regularly produces concerts and festivals of American music in Paris – including tributes to Leonard Bernstein, George Gershwin, Broadway, Duke Ellington and Louis Armstrong. Prior to that she served for 17 years as Chairman of the American Center of Paris, the avant-garde meeting place for French and American artists. In that capacity she selected Frank Gehry to design a new building in 1988 – one of his first in Europe. Described by Philip Johnson as “America’s Cultural Czarina in Europe,” she has also served on the French Ministry of Culture’s Conseil Supérieur du Mécénat, on the board of the Régine Chopinot Ballet and as a founding signatory of the World Charter against Cancer. Earlier in her career, she served as Director of Music at the Brooklyn Academy, Executive Director of the Merce Cunningham Dance Company and founded The Composer Speaks, a lecture bureau which brought some of the greatest composers of the 20th Century — Pierre Boulez, Karlheinz Stockhausen, Iannis Xenakis, John Cage, Luciano Berio and others — to cities and universities throughout the United States. She is an Officer of the French Legion of Honor and a Knight of the Order of Arts and Letters.
Performers
Vilmos Szabadi (violin)
Mr. Szabadi is Hungary’s foremost violinist, a regular soloist and frequent guest artist in the most prestigious concert halls around the world. Vilmos Szabadi studied at the Franz Liszt Academy of Music of Budapest where on receiving his diploma, he became the youngest ever to join the Professors’ team. His career as an international Concert violinist took off when he played Bartók 2nd Violin Concerto during the Bartók Festival at the Royal Festival Hall in London. The success of this Concert, led to invitations from the Royal Philharmonic Orchestra and the BBC Philharmonic Orchestra as well. Mr. Szabadi was also among the privileged musicians invited by HRH Prince Charles to perform at the celebration in honor of Sir Georg Solti’s 80th birthday held at the Buckingham Palace in 1992. In 1993 the prestigious “Franz Liszt” prize has been awarded to Vilmos Szabadi by the Hungarian Government. In 1995 he also appeared on the Stradivarius series, played the Strad violin owned by Spanish Royalty in Madrid. Mr. Szabadi is a recent double prize winner of the renowned MIDEM Festival in Cannes, France. He plays a cremonese Laurentius STORIONI instrument dated 1778.

Mariann Marczi (piano)
Mariann Marczi started playing piano at the age of four and now she holds a PhD from Franz Liszt Academy of Budapest, where she is a Professor. Ms. Marczi is a winner of many national and international awards, scholarships and piano competitions. She performed almost in every country in Europe, and she is also a frequent guest artist at many music festivals, such as the Bartók Festival; Prague-Wien-Budapest Festival etc. Her repertoire includes a wide range of works from early Baroque to contemporary music. Ms. Marczi turns with particular attention towards the works of J. S. Bach, Béla Bartók and György Kurtág. Since 2012 she is also a member of the World Piano Teachers Association and she often participates as lecturer at international conferences, such as the World Piano Conference (Novi Sad, Serbia) and the London International Piano Symposium.
Eszter Karasszon (cello)
Eszter Karasszon is a young Hungarian cellist, student at the Franz Liszt Academy of Music of Budapest. She is already a winner of many national and international awards, such as the Dohnányi Chamber Competition (2013) and the VI. David Popper Competition (2015). In 2010 she has been granted a scholarship giving her the possibility to participate in a master class of Indiana String Academy to Janos Starker. Ms. Karasszon has not only performed in Hungary but in many European countries and in the United States as well.
Ágnes Kőry (talk)
Hungarian-born Ágnes Kőry is a graduate of the Béla Bartók Conservatoire Budapest, Royal Academy of Music London (DipRAM) and University of London (MPhil). An ex-professional cellist, she focuses on research into a variety of fields (which include baroque string instruments, composers Béla Bartók and Zoltán Kodály, Holocaust history ). Ágnes Kőry presented her papers on musicological conferences (University of Edinburgh, University of London, University of Manchester, Institute of Musicology Budapest) . She is an author of many musicological journals such as the Galpin Society Journal, Studia Musicologica, Early Music, The Consort, Ethnomusicological Forum and Parlando. Ágnes Kőry’s scholarly papers are also published on a variety of scholarly websites in the United States, United Kingdom, Hungary and Israel. Ágnes Kőry is a regular contributor to classical music websites. Ágnes Kőry leads the Béla Bartók Centre for Musicianship (London), where specialized musicianship training coexists with comprehensive music education