You are here: Home / All We Need Is Love / Richard Petty and Trace Adkins Pick A Powder Campaign Effort 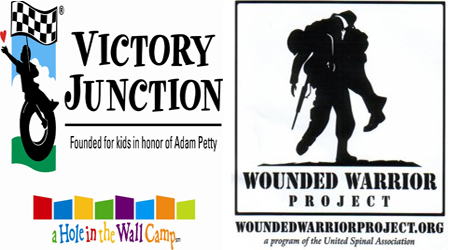 Memphis, Tenn. – It has been almost a year since the last Goody’s Fast Relief 500 Race at Martinsville Speedway and neither BC nor Goody’s Powders have slowed down. After the Martinsville Race in April 2011, Trace Adkins and Richard Petty were at it again. The two men, spokesmen for BC Powder and Goody’s Powder respectively, took no time off from their friendly rivalry, the Pick A Powder campaign (www.pickapowder.com), to determine who experiences the toughest pain and to play off the fierce and generational loyalty users have to either Goody’s or BC Headache Powder.

With the release of 12 new videos on BC Powder’s and Goody’s Powder’s Facebook pages in July 2011, fans of Petty and Adkins and of both brands of fast pain relief products were able to log on and see the two celebrities interact in even more humorous scenarios. The ‘painful moments’ –themed videos showcased the spokesmen boldly tackling one another’s worlds, emphasizing the effectiveness and need of headache powders to get rid of pain fast. The videos included anything from Adkins evaluating Petty’s dancing and wardrobe choices, Petty teaching Adkins about resistance training and trying anything and everything to remove a racing helmet from Adkins’ head, to Petty giving Adkins the opportunity to get behind the wheel for Richard Petty Motorsports.

In the late fall of 2011, the brands launched the “Like, Share, Change The World” campaign to give fans a chance to raise more funds and awareness for Wounded Warrior Project and Victory Junction – the charities selected by Adkins and Petty for BC and Goody’s respectively. Both Victory Junction and Wounded Warrior Project have been an integral part of the campaign since it began. Continuing to utilize the power of Facebook, fans were able to go to the BC and Goody’s Facebook pages to help raise funds for the charities. For every BC or Goody’s page “liked”, a $1.00 donation will be made (up to $100,000 collectively) to Wounded Warrior Project from BC in support of injured service members and to Victory Junction from Goody’s in support of children with chronic illnesses. After fans “like” BC or Goody’s pages, they can go to an electronic wall and share a suggestion for how to make the world a less painful place. After posting, fans can register for a sweepstakes for an all-expense paid VIP trip for four to the Goody’s Fast Relief 500 at Martinsville Speedway (race tickets, air and hotel) courtesy of Goody’s, or an all-expense paid VIP trip for four to a Trace Adkins concert stop (concert tickets, air and hotel) in 2012 (location TBD) courtesy of BC.

The “Like, Share, Change the World” campaign began on November 1, 2011, and will go through February 29, 2012. To date, nearly 40,000 fans have participated in the campaign resulting in nearly $40,000 that has been raised for the two charities. There’s room for 60,000 more “likes” by the end of February. BC and Goody’s collectively gave $100,000 to the charities in a check presentation at the last Goody’s Fast Relief 500. With the response to date from fans, BC and Goody’s look forward to raising that amount again for the charities to be presented at this year’s race.

Fans of BC and Goody’s Powders will soon notice new packages on the shelves. For a limited time, you will find Trace Adkins and Wounded Warrior Project (WWP) on select boxes of BC, and Richard Petty and Victory Junction on select boxes of Goody’s. With each purchase of these specially-marked boxes of BC or Goody’s, made between now and April 1, 2012, fans of Petty and Adkins will have yet another way of giving back to the charities affiliated with each spokesperson and each brand.

“We are very proud of all the efforts thus far and look forward to continuing to work with our spokesmen to help fight tough pain and support our charity partners,” said Mark Brooks, Sales Manager, BC and Goody’s Powders. “We have seen some amazing responses from fans for the “Like, Share, Change the World” campaign and are also looking at ways to leverage those responses and extend the campaign further. The year is off a great start and this is only the beginning. Martinsville, here we come!”

GlaxoSmithKline Consumer Healthcare is one of the world’s largest over-the-counter consumer healthcare products companies. Its brands include the leading smoking cessation products, Nicorette® and NicoDerm CQ®, as well as many medicine cabinet staples such as Aquafresh®, Sensodyne®, and TUMS® – which are trademarks owned by and/or licensed to GlaxoSmithKline Group of Companies.

GlaxoSmithKline – one of the world’s leading research-based pharmaceutical and healthcare companies – is committed to improving the quality of human life by enabling people to do more, feel better and live longer. For company information visit: www.gsk.com