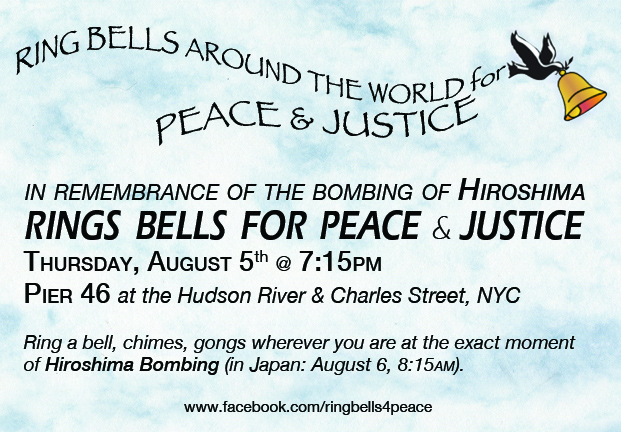 Ring Bells for PEACE & JUSTICE
at the moment of the Hiroshima bombing
Thursday, August 5 th 2021 @ 7:15pm

Pier 46 at the Hudson River and Charles Street
NEW YORK, NY – Join Universal Peace Day in a global event of ringing bells around the world for Peace and Justice commemorating the 76th anniversary of the dropping of the first atomic bomb on Hiroshima. This year the focus is on JUSTICE because without JUSTICE there is no PEACE.

At 7 pm: artists will share Visions of Peace with poetry, dance and music led by Eve Zanni and The Bliss Singers, pianist Isaac Raz

At 7:15 pm: Peace Bell Ringing Ceremony
at the exact moment of the Hiroshima bombing in NY
(8:15 AM August 6 in Japan),
followed by a minute of prayers for peace
then singing of John Lennon’s Imagine.
All are invited to ring bells, chimes, and gongs
BYOB – Bring Your Own Bell

Universal Peace Day brings people around the world together to share their vision of peace and to transform a remembrance of horror into a rededication of life. The legacy of Universal Peace Day, sponsored by Art For The People, began in 1984 in Central Park, where Peter Yarrow of Peter, Paul and Mary performed before a candle lighting ceremony at the moment of the Hiroshima bombing. Over the years, Universal Peace Day events have taken place in numerous NYC locations and all over the world.

RING A BELL WHEREVER YOU ARE
PLS PASS THE WORD TO FRIENDS AROUND THE WORLD.
THXXX!

What is Peace for Tatyana Mezhentseva?
Next Post: What Does Peace Mean to Jim McCann?