You are here: Home / All We Need Is Love / Good Samaritans / Robert M. Morgenthau 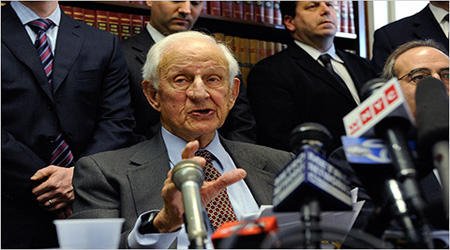 Robert Morris Morgenthau was born on July 31, 1919 in New York City. After graduating from Amherst College in 1941, he enlisted in the United States Navy, serving for four and a half years, during World War II. He served aboard the U.S.S. Winslow, the U.S.S. Lansdale, and the U.S.S. Harry F. Bauer, attained the final rank of Lieutenant Commander, and earned a Bronze Star and a Gold Star. After the war, Morgenthau enrolled at Yale Law School. Upon graduation in 1948 he joined the law firm of Patterson, Belknap & Webb, a New York City law firm, becoming a partner in 1954. In 1961, after twelve years of practicing corporate law, Morgenthau accepted an appointment from President John F. Kennedy as United States Attorney for the Southern District of New York. As U.S. Attorney for eight and one-half years, Morgenthau developed a reputation as an effective opponent of tax-fraud, organized crime, corruption, and white-collar crime. Among other achievements, he established a special unit to investigate securities fraud and prosecuted highly publicized bribery cases against city officials and IRS attorneys and accountants. In January of 1970, following the election of President Richard M. Nixon, Morgenthau resigned from his post as United States Attorney. He returned to private life until 1974, when he made the first of eight successful bids for election as District Attorney of New York County. Robert Morgenthau has received numerous awards and honors, including the Citation of Merit (Yale Law School), the Emory Buckner Award (Federal Bar Council), the Fordham-Stein Prize, the Thomas Jefferson Award in Law (University of Virginia), the Brandeis Medal (University of Louisville Law School), and the Distinguished Public Service Award (New York County Lawyer’s Association). He is also an active member of the New York community. His principal civic activities are the Police Athletic League (PAL), which he has served since 1962, first as President and then Chairman, and the Museum of Jewish Heritage — A Living Memorial to the Holocaust, of which he is Chairman.