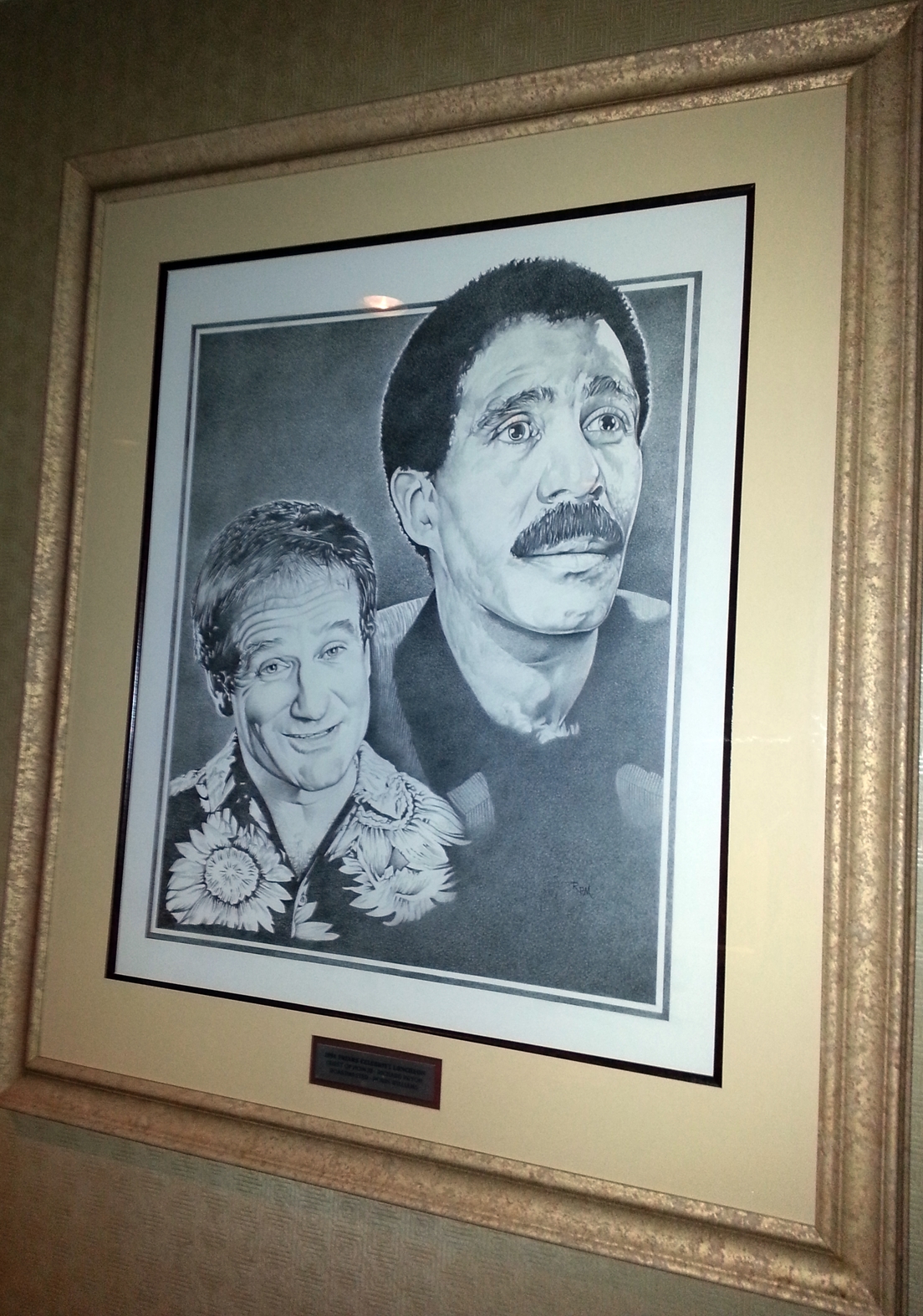 Robin McLaurin Williams was an American actor, comedian, and filmmaker. Starting as a stand-up comedian in San Francisco and Los Angeles in the mid-1970s, he is credited with leading San Francisco’s comedy renaissance. After rising to fame as Mork in the TV series Mork & Mindy (1978–82), Williams went on to establish a career in both stand-up comedy and feature film acting.

Early influences
Williams has credited other comedians with having influenced and inspired him, including Jonathan Winters, Peter Sellers, Nichols and May, and Lenny Bruce, partly because they attracted a more intellectual audience by using a higher level of wit.[1]:43 He also liked Jay Leno for his quickness in ad-libbing comedy routines, and Sid Caesar, whose acts he felt were “precious.”[30]

Jonathan Winters became his “idol” early in life; Williams first saw him on TV when he was eight, and paid him homage in interviews throughout his career.[1]:259[31] Williams was inspired by Winters’s ingenuity, realizing, he said, “that anything is possible, that anything is funny. . . He gave me the idea that it can be free-form, that you can go in and out of things pretty easily.”[1]:260

During an interview in London in 2002, he told British television host Sir Michael Parkinson that Peter Sellers was an important influence, especially his multi-character roles in Dr. Strangelove: “It doesn’t get better than that.” Williams owned a rare recording of Sellers’s early radio Goon Shows[32] British comedy actors Dudley Moore and Peter Cook were also among his influences, he told Parkinson.

Williams was also influenced by comedian Richard Pryor’s fearless ability to talk about his personal life on stage, with subjects including his use of drugs and alcohol, and Williams added those kinds of topics during his own performances. By bringing up such personal matters as a form of comedy, he told Parkinson, it was “cheaper than therapy,” and gave him a way to release his pent up energy and emotions.

Pryor was known for uncompromising examinations of racism and topical contemporary issues, which employed colorful vulgarities, and profanity, as well as racial epithets. He reached a broad audience with his trenchant observations and storytelling style. He is widely regarded as one of the most important and influential stand-up comedians of all time: Jerry Seinfeld called Pryor “The Picasso of our profession”;[20] Bob Newhart has called Pryor “the seminal comedian of the last 50 years.”[21] This legacy can be attributed, in part, to the unusual degree of intimacy Pryor brought to bear on his comedy. As Bill Cosby reportedly once said, “Richard Pryor drew the line between comedy and tragedy as thin as one could possibly paint it.”[22]

His body of work includes the concert movies and recordings Richard Pryor: Live & Smokin’ (1971), That Nigger’s Crazy (1974), …Is It Something I Said? (1975), Bicentennial Nigger (1976), Richard Pryor: Live in Concert (1979), Richard Pryor: Live on the Sunset Strip (1982), and Richard Pryor: Here and Now (1983). He also starred in numerous films as an actor, such as Superman III (1983) but was usually in comedies such as Silver Streak (1976), and occasionally in dramatic roles, such as Paul Schrader’s film Blue Collar (1978). He collaborated on many projects with actor Gene Wilder. Another frequent collaborator was actor/comedian/writer Paul Mooney.

A planned biopic entitled Richard Pryor: Is It Something I Said? is being produced by Chris Rock and Adam Sandler.  The film will star Marlon Wayans as the young Pryor.[43] Other actors previously attached include Mike Epps and Eddie Murphy. The film will be directed by Bill Condon and is still in development with no release date, as of February 2013.[44]

On December 19, 2005, BET aired a Pryor special. It included commentary from fellow comedians, and insight into his upbringing.

An image of Pryor can be seen on the Rage Against the Machine music video for their cover of Soulsonic Force’s “Renegades of Funk”.

On March 1, 2008, fellow comedian George Carlin performed his final HBO special. An image of Pryor can be seen in the background throughout his set. Carlin would mention Pryor’s death in his memoir, Last Words, noting their friendly rivalry that lasted until Carlin finally beat him “in the Heart Attack 5000”.

A retrospective of Pryor’s film work, concentrating on the 1970s, entitled “A Pryor Engagement”, opened at Brooklyn Academy of Music Cinemas for a two-week run in February 2013.

In a tribute made by Jackson Browne to roadies and fans—”The Load-Out”, released on the 1977 album Running on Empty—the lyrics state that “we got Richard Pryor on the video” on the tour bus.

Pryor was posthumously awarded the Grammy Lifetime Achievement Award in 2006.[46]

The animal rights organization PETA gives out an award in Pryor’s name to people who have done outstanding work to alleviate animal suffering. Pryor was active in animal rights and was deeply concerned about the plight of elephants in circuses and zoos.

Biopic
It was announced in August 2014, that a biopic on the life and works of Pryor is being produced by Lee Daniels as director and Oprah Winfrey as producer.[47] Actor Mike Epps is set to play Pryor.