“Routes on the tip of the tongue”: food and the dream of a Chinese city behind the tour -Meet Chengdu, communicate with the world and share their new economy. See all the love at the event for Chengdu and Certificates of Recognition and Congratulations from Mayor de Blasio and Borough President of Brooklyn Eric Adams, Click Here for Videos & Podcasts…

You are here: Home / Today's Good News / “Routes on the tip of the tongue”: food and the dream of a Chinese city behind the tour -Meet Chengdu, communicate with the world and share their new economy. See all the love at the event for Chengdu and Certificates of Recognition and Congratulations from Mayor de Blasio and Borough President of Brooklyn Eric Adams, Click Here for Videos & Podcasts…

In 2010, Chengdu was awarded the title of “World Food Capital” by UNESCO and was the first city in Asia to achieve such a reputation. As the birthplace and development center of Sichuan cuisine, Chengdu has become one of the most important food centers in the world, and the cuisine is a brilliant business card in Chengdu. It not only has China’s earliest breweries, the earliest tea culture center, the first vegetable industry base and the first museum of cuisine, but also has a highly developed food industry, professional cuisine agencies and a large number of outstanding chefs. For Chengdu, food is synonymous with “creativity.” In September 2017, the 22nd General Assembly of the UN World Tourism Organization (UNWTO) was held in Chengdu. This is the second time the congress has entered China and held the high level conference for the first time in a city in Western China. The election of the highest level of tourism of Chengdu was held in Chengdu, bringing a more international perspective to Chengdu and enhancing the tourist image of Chengdu.

As a world-famous tourist destination, Chengdu is shaping the city brand of “Three Cities, Three Cities and Three Cities”: “Three Cities” – a famous cultural city in the world, a famous tourist city in the world and a famous city in the world; and “Sandu” – the international food capital, the provincial capital, the international exhibition capital. In the process of development, Chengdu also proposed “promoting green development and building a beautiful model city in China”, creating an attractive business card for urban green development. At present, a new round of scientific and technological revolution and industrial reform are accelerating the acceleration of human society by irreversible forces. Chengdu also proposes a new urban dream with a focus on the “six new economic patterns”, ie, digital economy, smart economy, green economy, creativity economy, flow economy and sharing economy. The “Seven Major Scenarios” of building an economic entity with service entities, smart city construction, science and technology innovation industry, human capital collaboration, consumer upgrade, green low-carbon development and innovative application of modern supply chain. Chengdu people are working hard for their Chinese dreams and Chengdu dreams.

In October 2017, Hainan Airlines officially opened a regular non-stop service from Chengdu to New York. This non-stop “Chengdu-New York” non-stop service was also a “route on the tongue.” Through 15-hour flight, the delicious Sichuan cuisine and naive giant pandas will make tourists from New York City feel immediately in Mala Tang the charm of Chengdu. In fact, in addition to the panda and the food, there are many beautiful, historic and relic sites in the city that are worth a pampered visit to Chengdu.
The event – hosted by Chengdu Travel and Tourism Bureau, Chengdu Culture and Tourism, CGGroup – a media firm on Wall Street, and NewLegend, a Chengdu cuisine and travel Experience Center – will take you to understand the history and culture of Chengdu, its economic development, tourism and other food information; through rich promotional videos, travel routes referrals to the people of New York and international friends, and high-quality tourist resources, people will come to understand the new dream of a central city in China!
“Routes on the Tongue”: Food and Dream of a Chinese City Behind Traveling’s Organisers are as follows:
Chengdu Tourism Bureau
Chengdu Culture & Tourism
CG Group on Wall Street
New Legend
Time: 28, December 5: 30-8: 30 p.m.
Address: New Legend, 88 7th Avenue, New York City, NY 10011
Guest introduction:
The mayor’s assistant personally came to read the Mayor’s congratulation letter at 5:30 am on the opening day.
1 Co- Moderator: Mr. Paul Sladkus www.goodnewsplanet.com & www.goodnewschina.TV President, former CBS movie and television producer
He spent 13 years at CBS and PBS where he founded MBC and Good News Corporation with more than
5,000 television programs he personally participated in and was honored last year by the United Nations
Peace Day Day best coverage 5 Star Diamond Award.

2 Co-Moderator: Dr. Jeannie Yi, President of CGGroup & Vice President of Chengdu
Overseas Exchange Association and Board Director of Greater New York Alumni Association of Peking University
With 20 years of working experience on Wall Street in human capital management, PR and marketing, Dr Yi held a PhD in comparative literature and a certificate from Harvard B School and has for the past ten years devoted her talents and her rich New York resources to the modernisation and globalisation of her birthplace- Chengdu by creating win-win situations.

3 Jonathan Ho: Chengdu New Legend owner, New York’s Hudson Club Group President
Mr Ho’s dream is to create the culinary delights with Chinese characteristics through the finest Chinese delicacies - especially those with  the gold medal of the United Nations – in the culinary culture, which is enriched by the profound Chinese culture to satisfy
the brain and stomach, the spirit and the flesh. Mr Ho has more than 10 restaurants in New York and an IPO will be available next year.

4. Mr. Yu of Hainan Airlines New York Office General Manager. At present, Hainan Airlines has become the airline with the largest number of non-stop flights between China and the world. There are 12 routes between China and the United States. The newly opened New York to Chengdu and New York to Chongqing flights greatly facilitate the bilateral economy in the eastern United States and western China in cultural exchanges and business interaction. HNA owns China’s largest fleet of Boeing 787 Dreamliners, with almost all of its non-stop flights between China and the United States. The new routes provide free shuttle services, most of the domestic transit free of charge.   5 Gerard Mc Keon: President, New York Known Elite Magazine (Black Tie) magazine. Gerald came to the United States 20 years ago and fulfilled his American Dream by fighting along with 14 million other Irish people who chose America to be their new homes. And they succeeded- they collectively obtained 14 million Irish green cards, and Gerard was one of the most respected spokesmen.BlackTie magazine is widely acclaimed for its reporting on high level charity events and US-China events. During the past year, nearly 200 Sino-U.S. Relations and Sino-U.S. Trade and community activities were reported from New York and Beijing.

6. Markly Wilson New York State Department of Tourism International Marketing Director
In charge of international tourism marketing in New York State. He was president of The Wilson Company, US manager
of Barbados Tourism, and director of marketing for the Caribbean Tourism Organization.
He manages the Watchable Wildlife Program, a collaborative project between the federal and state agencies
that NewYork serves for visitors.

7 Mr. Ye Xian, a hippocampus publisher Shanghai, a U.S. citizen and the largest publisher of Chinese books in the United States
Mr. Ye, a graduate student from the Department of Journalism at Fudan University in Shanghai and
a graduate of the Department of Journalism at New York University, worked in mainstream media in the United States
. The rise of China’s economy has made Mr. Ye feel the responsibility of a Chinese media person. Resolutely resigned,
founded the “hippocampus Book Group.” The “Haier’s Road”, co-authored with Jeannie in 2004, sold well on the Amazon for 10 years.
The book was published within three weeks Korea Japan Germany bought the copyright. It has also used Chinese books,
including Chinese entrepreneurs, China Tourism Consulting and pictures of peasants, to give Chinese tourists a chance to travel
to China in order to promote and introduce Chinese geography, Chinese culture and opportunities in China.
Recently published in the United States a set of English books on Chinese cultural heritage, a total of 15, one of which is
Sichuan Opera, will be given tonight’s event to Chengdu Tourism Bureau.  8. Miss Zhang Weini: Ya Bo Gallery head, Hong Kong antiques collection family, Chinese students New York’s “good mother”
One of the most influential galleries in New York City among the Chinese who have created the world’s most influential art gallery.  With its eye-catching eyes and generous generosity, Yabo Gallery has successfully created hundreds of art exhibitions for Chinese artists in New York’s “home away from home.” In recent years, she has paid particular attention to the growth of young artists and the rise of wealth. China should have the right to speak in Western countries and launched the ”International League of Young Artist Artists” to help young artists to go global.

9 Mr. Zhou Jiushu Chengdu, a graduate of China-US Financial and IT Heights, a senior expert on Wall Street risk management
Mr. Chow, a Chengdu-based Wall Street professional who spent nearly 25 years with Citibank in New York and IBM Beijing,
has a unique and original interpretation of the beauty of Chengdu. For example, Zhao Yun in the Three Kingdoms is a typical
“best risk management expert” in the “Best Practices”. In the course of Zhuge Liang’s three letters “punctuality and punctuality”
being implemented, the entire army won and the other party lost his wife and soldier again. In the Journey to the West, monks
from the Qingcheng Mountain in Chengdu also set out to learn from the West … Chengdu’s cultural resources, in the eyes of Mr. Zhou,
can be precisely defined by Wall Street and high-tech artificial intelligence to innovate products to achieve Marketing the purpose
of the city. Financial innovation is to Think outside the box. Cultural and creative economy: the same is true. 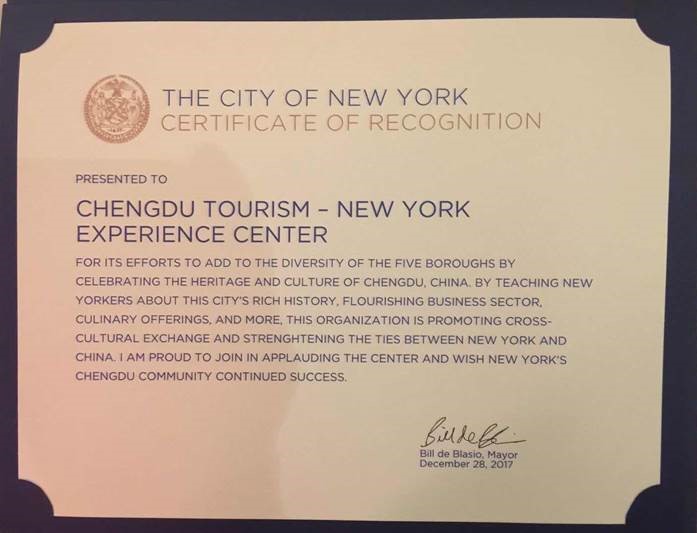 THE CITY OF NEW YORK
CERTIFICATE OF RECOGNITION
PRESENTED TO
CHENGDU TOURISM-NEW YORK
EXPERIENCE CENTER
for its efforts to add to the diversity of the five boroughs by celebrating the heritage and culture of Chengdu, china. by teaching New Yorkers about this city’s rich history, flourishing business sector, culinary offerings, and more, this organization is promoting cross-cultural exchange and strengthening the ties between New York and china. i am proud to join in applauding the center and wish New York’s Chengdu community continued success.
BILL DE BLASIO, MAYOR
DECEMBER 28, 2017 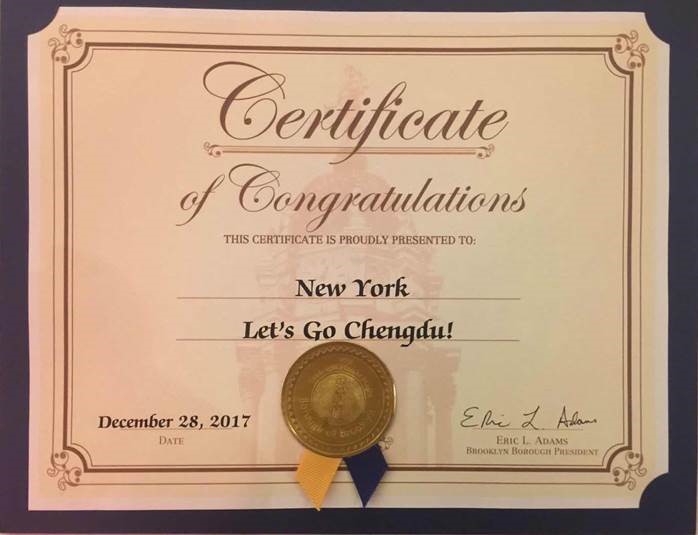 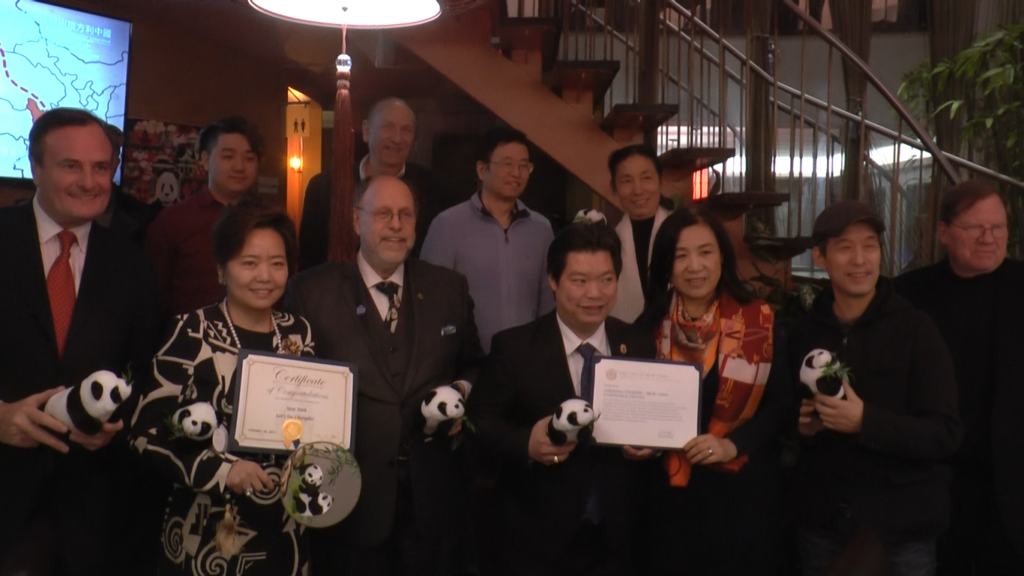 Thought for the Day…
Next Post: You Raise Me Up sung by 2 extraordinary children..our next generation. Happy New Year, 2018 will be great. Stay healthy please, we need you! Click Here for Video…