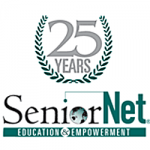 SeniorNet Enters its 25th Year of Bringing Computers and the Internet to Older Americans
Leading Nonprofit that Has Connected Millions of Seniors Will Continue to Innovate in Helping Older Americans Bridge the Digital Divide, Announces Date for Capitol Hill Birthday Celebration

Herndon, Va., February 7, 2011 – SeniorNet, the world’s leading nonprofit technology educator of older adults, today kicked off its 25th year of bringing the computer age to millions of Americans in their Golden Years. SeniorNet also announced that it will officially celebrate its 25th anniversary by hosting a birthday party at the U.S. Capitol in Washington, DC on May 19, 2011.

Founded in 1986, SeniorNet is a nationwide nonprofit organization with approximately 8,000 members that has taught millions of older adults to use computers and the internet, enhancing their lives and enabling them to share their knowledge and wisdom.

The organization plans to celebrate its 25th anniversary throughout the upcoming year by introducing a series of programs, innovations and partnerships that will continue to expand access to computers and the internet for older Americans, particular those in underserved communities and regions of the country.

Some of the new programs in development will showcase best in class technology aimed at improving computer access and education for older Americans, while new partnership opportunities will enable corporate sponsors to actively support SeniorNet as it commemorates this historic milestone.

The celebrations will culminate in a 25th birthday party at the U.S. Capitol in Washington, DC on May 19, 2011. SeniorNet centers around the country will join the celebration via live webcast.

“Today, Americans over age 50 are the fastest growing users of social media and other new communications tools,” said Leslie M. Smith, SeniorNet board chairman, and IBM Sales Executive. “SeniorNet is proud to have played a role in this growing phenomenon and we will continue to blaze the trail to ensure that no American, regardless of age, is left behind the Digital Divide. We look forward to kicking off another 25 years of progress with our Capitol Hill birthday celebration on May 19.”

About SeniorNet
SeniorNet is the nation’s most respected nonprofit organization specializing in computer and Internet education for older adults. Since 1986, SeniorNet has empowered over one million Boomers and Seniors providing encouragement, lifelong learning opportunities and new worlds to explore via the Internet. Based in Herndon, Virginia, it has approximately 8,000 members. SeniorNet is staffed by more than 3,000 volunteers and has almost 65 Learning Centers in the United States, including Indian Reservations and underserved areas.