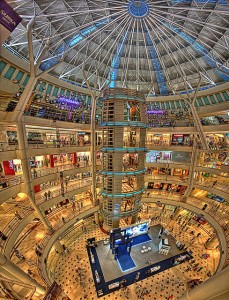 More than just a Mall, the SM Mall Of Asia is a tourist destination that has raised the standard of shopping, leisure and entertainment in the Philippines.

Mall of Asia “The Biggest and Brightest”

Almost four hectares of floor area. 8,000 parking slots. 5,000 square meters allotted for public utility vehicles. 100 slots for tourist buses. Almost one kilometer in length, and a perimeter of almost 2 kilometers. Close to 2 million bags of cement used to build it and 44,000 gallons of paint consumed. It also has 1.9 million floor tiles installed in it. One wonders if this scale of development was for an airport terminal, a seaport, or an industrial complex.

Interestingly, however, these facts speak about the Philippines’ largest and world’s third largest mall, the 407,000 square-meter SM Mall of Asia.

How It All Began

In the early nineties, SM Prime parent company, SM Investments Corporation (SM), joined a consortium to reclaim 100 hectares of land along scenic Manila Bay in Pasay City. Back then, known visionary Mr. Henry Sy, Sr., chairman of both SM and SM Prime, already had in mind building one of the largest malls in Asia. He envisioned the mall to be more than just a shopping complex. He wanted it to be a premiere integrated leisure destination. This vision gave birth to the SM Mall of Asia. “Shoppers and tourists will come to the SM Mall of Asia not just to shop but for leisure,” Mr. Sy explained. “The mall will be a major Asia-Pacific destination,” he added.

And so it was that SM Prime made sure that the mall would be true to his vision. They closely monitored all aspects of planning and development – the design, the theme, the amenities, even details such as wall color. “We made no compromises here. We paid attention to everything,” he said.

In May 2006, Mr. Sy’s vision turned to reality with the opening of the SM Mall of Asia, SM Prime’s 25th mall, right at the heart of SM BayCity.