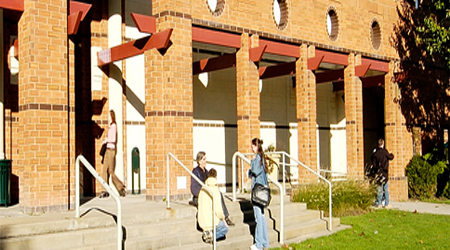 PATCHOGUE AND BROOKLYN, N.Y. – March 5, 2012 – St. Joseph’s College is pleased to announce The Dr. Reza Khatib and Georgianna Clifford Khatib Chair in Comparative Religion Fourth Annual Lecture featuring interfaith relations expert Rabbi Gary Bretton-Granatoor. Rabbi Bretton-Granatoor will present a lecture entitled, “Catholic-Jewish Relations: 46 Years From Vatican II When Everything Changed — Or Did It?” on Tuesday, March 13 at 7:30 p.m. on the Long Island Campus and Tuesday, March 27 at 12:30 p.m. on the Brooklyn Campus. Both lectures are free and open to the public.

Rabbi Gary Bretton-Granatoor is the vice president of philanthropy at the World Union for Progressive Judaism which serves, nurtures and supports more than 1,200 reform/progressive/liberal Jewish congregations and more than 1.7 million members around the world. He is a recognized expert in interfaith relations, a well-known lecturer, author of numerous articles and editor of two books. Rabbi Bretton-Granatoor has also served as director of the education division and as director of interfaith affairs at the Anti-Defamation League. He served as senior rabbi at Stephen Wise Free Synagogue in Manhattan for eight years.

Funded by Dr. Reza Khatib and Mrs. Georgianna Clifford Khatib ’52, the chair’s purpose is to promote interfaith dialog, with the study of Islam being an integral part of the initiative. Each spring, through the generosity of Dr. and Mrs. Khatib, the College hosts a noted scholar who lectures, leads faculty discussions and teaches a course to students from both campuses.

ABOUT ST. JOSEPH’S COLLEGE
St. Joseph’s College has been dedicated to providing a diverse population of students in the New York metropolitan area with an affordable education rooted in the liberal arts tradition since 1916. Independent and coeducational, the College provides a strong academic and value-oriented education at the undergraduate and graduate levels, aiming to prepare each student for a life characterized by integrity, intellectual and spiritual values, social responsibility, and service. With campuses located in the Clinton Hill area of Brooklyn and in Patchogue, Long Island, the College offers degrees in more than 23 majors, special course offerings and certificates, affiliated and pre-professional programs through its School of Arts and Sciences and its School of Professional and Graduate Studies.