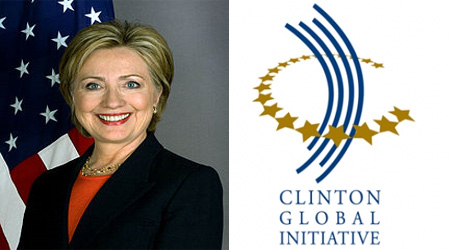 The Clinton Global Initiative (CGI) Annual Meeting, established in 2005 by President Bill Clinton, is the premier global gathering for current and former heads of state, chief executives of corporations, philanthropists, thought leaders, prominent members of the media, and directors of nonprofit organizations. During the seventh Annual Meeting in New York City, members shared successful strategies, forged partnerships, and gained practical insights that they can use to enhance their work. Each member creates a Commitment to Action – a detailed plan for addressing a major global challenge in the areas of economic empowerment, education, environment & energy, and global health. The 2011 CGI Annual Meeting was held September 20 through September 22, 2011.

The 2011 CGI Annual Meeting plays host to hundreds of world leaders who want to take action on an unprecedented array of global challenges, including empowering girls and women, sustainable consumption, and economic growth and job creation. In response to these challenges, more than 1,200 attendees are expected to make more than 200 commitments at this year’s meeting. To date, CGI members have made more than 2,000 commitments, which have already improved the lives of 300 million people in more than 180 countries. When fully funded and implemented, these commitments will be valued in excess of $63 billion.

The Clinton Global Initiative convenes global leaders to devise and implement innovative solutions to some of the world’s most pressing challenges. Since 2005, CGI Annual Meetings have brought together nearly 150 current and former heads of state, 18 Nobel Prize laureates, hundreds of leading CEOs, heads of foundations, major philanthropists, directors of the most effective nongovernmental organizations, and prominent members of the media. These CGI members have made more than 2,000 commitments, which have already improved the lives of 300 million people in more than 180 countries. When fully funded and implemented, these commitments will be valued in excess of $63 billion. In 2009, the Annual Meeting was named the No. 1 conference for CEOs. For more information, visit www.clintonglobalinitiative.org

Good News send its condolences to the Clinton family on the loss of Hillary’s mother.