Susanne Veder Berger hid her face for more than 50 years 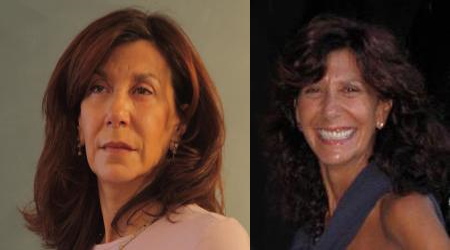 Susanne Veder Berger hid her face for more than 50 years — now, an

her “true face.”Susanne calls it “Getting Naked.”

for those who simply long to be accepted and fit in.

Since birth, Susanne Veder Berger was taught to hide herself, to cover the

conspicuous and disfiguring port-wine stain that dominated nearly the

entire left side of her face.(Doctors of old referred to the stain as

capillaries below the surface of the skin.)Today, they are simply known

as a port wine stain due to the red, wine colored stain.

When Susanne was only four years old, she was taught how to hide her face

each day in an effort to avoid teasing and humiliation. Susanne did this

College in Toronto, got married, moved to the New York City suburbs and

raised two children.Conditioned to believe that if the mask ever slipped

too painful for Susanne to even imagine.

At the age of 30, Susanne met a remarkable dermatologist by the name of

Dr. Roy Geronemus, a pioneer in the use of the pulse dye laser for the

treatment of conditions of this kind.Under the care of Dr. Geronemus,

Director of the Laser & Skin Surgery Center of New York, Susanne began a

series of dozens of pulsed dye laser treatment sessions that would

Susanne says that this procedure was literally a godsend, and now

after more than 50 surgical procedures, starting in 1987 she now feels

as if she has been born again.Susanne is in a unique position to tell

skin condition because she has personally experienced the benefits and

With the remarkable success of these laser treatments, Susanne is now

embracing what she calls getting naked for all the world to see! In

fact, thats the title of her memoir, an epic story spanning two

continents and some of the most challenging chapters of recent history.

In Getting Naked, Susanne shares stories of her childhood, growing up in

Holland and Canada.Family members who are featured in the book include

some of the most influential members of society in Holland, including

Ashkenazi Synagogue in Amsterdam with a congregation of 60,000 followers.

Susannes life was also touched in a powerful way by the Holocaust.Her

great-grandfather was captured by German soldiers in 1943, and many other

members of her family perished in this great tragedy. (Miraculously, at

the time of this great conflict, Susannes fathers family was able to successfully escape.)

Susanne herself has also faced a number of challenges in her adult years,

wine birthmark.These challenges include the shock of being abandoned by

her first husband, leaving her a single mother with two children, her

efforts to build a career in New York, and her love affair and the

untimely passing of her third husband, Dr. Sidney R. Berger , the only man

who truly accepted her as she really was.

Freedom and Honesty Through a Remarkable Surgical Procedure

Laser treatment of the kind performed by Dr. Roy Geronemous and his

colleague Dr. Leonard Bernstein is the most advanced procedure available

for destroying the capillaries below the surface of the skin.When you

Therefore, the thermal effects of the laser will boil and dry up the

excess blood in the capillaries thereby returning them to their normal

state. After a period of weeks, the stain will begin to lighten as these

vessels return to their normal condition.

When Susanne began treatment with Dr. Geronemous in 1987, she discovered

that patients came from around the world to see this pioneer in the field.

She has watched Dr. Geronemouss practice grow over the years as he

moved from NYUs medical staff to establish his own treatment center, one

of the most respected in this field.Susanne is extremely grateful to

this medical genius, not only for his mastery of the latest techniques in

the field of laser surgery, but because she found the deepest level of

trust with this doctor an essential ingredient when it comes to

treatment of this kind. Although Susanne still requires a number of

additional sessions for the phase of treatment that she began in 2008, she

has now reached the remarkable milestone where, for the first time in her

life, she no longer feels it necessary to mask her face.I still have

trouble recognizing that beautiful woman I see in the mirror these days,

A Metaphor for All of Us

their family and the support of their friends, if the world somehow

learned what they were really like.For Susanne, this feeling dominated

her life, until very recently when breakthroughs in laser surgery finally

allowed her to lift her mask.This literal transformation offers us

insight into the transformation that is possible for all of us, and the

courage to show the world who we really are.

both Holland and Canada After attending Seneca College in Toronto, Susanne

married and became the mother of two wonderful children Marshall and

active in a number of school organizations and following an abrupt

marketing for CitiGroup, the U.S. Tennis Association and a number of other

to his passing in April 2010.Susanne is currently writing her memoir,