You are here: Home / Good News To Go / The athlete Xiomara Getrouw x

Here’s the Audio Conversation. https://fccdl.in/9KW1ZvbdNf click the link to listen.
Xiomara Getrouw is an athlete who was born in 1994. She’s a young and upcoming talent in sports. Currently her main focus is on swimming, but she is also very good at running marathons and cycling. Xiomara is a born triathlete. She’s been into sports since age 4. She was inspired by her mother who also was an athlete. My mom has a swim school in Suriname, South America.

Since the start of her career Xiomara has done many impressive things. She won a lot of prices and awards, has many records in her name and her strength is still increasing. Xiomara studied languages at AlphaMax Academy. This is an international private school based in Suriname, a country in South America. After she graduated from AlphaMax Academy she moved to the United States where she’s continuing her study. I study at MCC and graduated in May 2015. I studied liberal arts but focusing on Spanish and Sign Language. Then I moved to North Carolina where I earn a bachelor degree in Interdisciplinary studies focusing on Sport management, communication and as a minor in Spanish.

Xiomara trains on a daily basis and specialized in swimming categories: Back stroke (50m, 100m and 200m) and marathon swimming. The trainings, strength trainings amongst others, are necessary to reach the top. Xiomara is very ambitious and serious about her goals. She wants to participate at the Olympics. With the help of her Surinamese and American coaches, but mostly on her own strength and will power she reached the high level she’s currently at.

Xiomara is the first Surinamese who ever ran a 42 km marathon at age 16 and finished 1st place in her category.

A few of the highlights of Xiomara’s career: 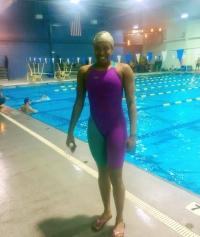 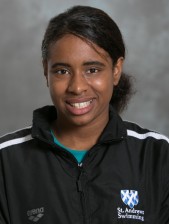 Xiomara has a special interest for the deaf community. She studies American Sign Language and wants to contribute in better communication and getting attention for this subject.

One of the nicest things about Xiomara is that even though she did and reached so much, she still is modest. She is not arrogant and is very grateful for what is granted to her. This “down to earth” approach of her is of her great features and will help her, together with her strength, faith and ambition to reach the top of the world.

To summarize the above it is safe to say that Xiomara Getrouw is an athlete to remember: a multi talent, swimmer, marathon runner and cycler.

Xiomara Getrouw is one of the persons of Surinamese descendant to be very proud of!

My goal is to train for the World championships in July 2018 in South Korea and the biggest dream that I would like to achieve is going to the Olympic Games 2020 Japan, Tokoyo.

Another thing that I am doing right now is that I am in the process of writing a book about my struggles and how I put it in something positive.

https://www.youtube.com/watch?v=05m6Gnc9xVw  The title is : The deaf Event On March 14,  2015 with Xiomara Getrouw ( Another signing project)

https://www.youtube.com/watch?v=QPciCNFxzOM  ( In Suriname, explaining about the Dutch and American Sign Language.) Title of the video is: Xiomara Getrouw explains about American and Dutch Sign language for the deaf community