The Best Of American, Western And Chinese Culture Meet At Carnegie Hall In Annual Musical Gala 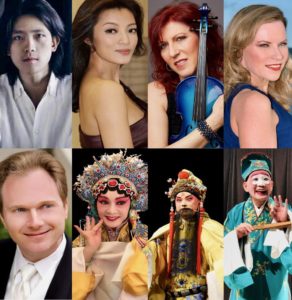 One of the highlights of any trip to China is a visit to the country’s theater—the drama and music are unlike anything we have, and it’s a must for all tourists. You may not understand what you’ve heard, but you will get an instant appreciation for what this ancient culture holds dear.

Now, you don’t have to travel that far. In fact, while you’re in New York City you can catch up with the best in Chinese culture, along with classic Western. It happens annually at an event known as the Chinese New Year Spectacular.

This is the Year of the Rat, and to ring in the New Year, the sixth annual Spectacular will be unveiled next Friday, Feb. 7, at…are you ready?….Carnegie Hall. Yes, the repository of the best of music. The New Year show will be starting at 7:30 P.M. with a combination of classic Chinese drama, good old-fashioned ballet, a Beethoven selection, opera, and lively American music.

It has come about under the aegis of Harvard Wealth Strategy & Management, LLC, along with Premier Event Management Inc., whose president, Charles Sullivan, has been on a mission to have the two cultures get to know each other better.

One of his favorite descriptions of things he likes is “grand and glorious,” and perhaps he also has this show in mind.

His co-producer is the internationally renowned Lili Li. Sullivan describes her importance in the project as similar to what “Bill Belichick has played in the success of the Patriots.” She has organized the talent in America and China, and has been instrumental in bringing together influential people from both countries.

I wondered what the “Konqu” performers were, and what the drama they were creating in front of me meant.

You feel you are looking at an ancient Chinese print. The two principals in this show spend more than two hours putting on makeup and elaborate costumes. The name “Konqu,” or “Konju” comes from the area of Kunshan, perhaps as early as the 17th Century. And there, in front of you, a world appears in which these two stylized figures recite poetry, sing, and dance. You are transported to another world.

And then there are the more familiar acts: An intriguing violinist named Deni Bonet, along with a guitarist and pianist, struts around the stage in lively renditions of her own and others’ songs. You might have seen her on Saturday Night Live, or perhaps with Cyndi Lauper or at many other major venues. 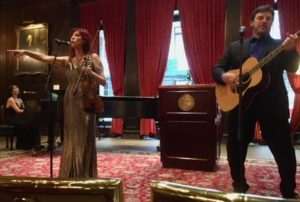 Deni Bonet sings and plays and moves.
Engaging, multi-talented violinist Deni Bonet CREDIT: ROSALIND ESKENAZI
Unlike most violinists, she is not nailed to the floor. And she doesn’t shy away from going head-to-head with the guitar player, having fun and breaking an erstwhile-stodgy image of the grand old instrument.

On a classical note, Quan Chen, an operatic soprano, takes over the stage with her presence and her voice. She holds a pair of master’s degrees—one earned not far from Carnegie Hall, at the Manhattan School of Music.

She loves bringing the Western canon to China, and says that, while the audiences there may not be familiar with the music, it tends to bring East and West together. 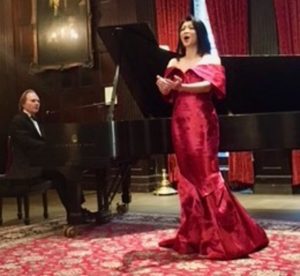 With Degrees From East and West
Quan Chen’s Classic Soprano ROSALIND ESKENAZI
That is an event echoed by the the spectacular classical pianist Cong Bi, who earned the Steinway Award in 2019. He speaks of his love for Beethoven, and it shows in his nimble performance.

There are other wonderful artists in the show, which is held at Carnegie’s Zankel Hall at quite affordable prices for all: prices start at $28, but there is a 25 percent discount for seniors over 60, children under 12, and active military. Get them at: carnegiehall.org, or at 212 247-7800. And enjoy the Year of the Rat!
#best #american #western #chinese #culture #carnegie #hall #annual #musical #gala #china #music #ancient #new #year #classic #spectacular #ballet #beethoven #opera #harvard #wealth #strategy #management #konqu #konju #kunshan #lauper #poetry #sing #dance #lili #li #deni #bonet #cyndi