The Biggest Halloween Parade in History II from Times Square, a National Broadcast Campaign and Live Virtual Event Broadcast Around the Globe Celebrating Trick-or-Treat for UNICEF

You are here: Home / Peace / The Biggest Halloween Parade in History II from Times Square, a National Broadcast Campaign and Live Virtual Event Broadcast Around the Globe Celebrating Trick-or-Treat for UNICEF 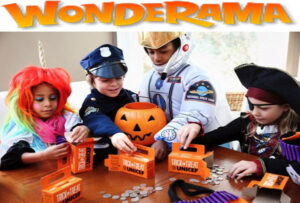 The “Biggest Halloween Parade in History II”
10 stories tall Live from the Crossroads of the World broadcast from Times Square October 30th, 2022

Wonderama, One Times Square and the Times Square Alliance have partnered to provide a national cross platform media campaign to bring new “meaning to this year’s Halloweening” with a live parade event from New York’s Times Square honoring Trick-or-Treat for UNICEF. This holiday family event will be featured in-program on Wonderama’s nationally syndicated television network for five (5) consecutive weeks promoting a call to action in support of UNICEF’s global response to issues around the world. The parade event down Broadway and 7th Avenues will be hosted by Wonderama’s David Osmond with special guest host UNICEF USA’s CEO Michael Nyenhuis and will be streamed live around the globe. And, for the first time ever parade participants and parade goers will be in for a real treat – “As Wonderama turns One Times Square into One Times Scare” – where visitors to Times Square will experience the real magic of the holiday in the first ever custom created Halloween experience taking place outside at One Time Square!

As our partner for BHPIH 2, in addition to the media impressions, the national partnership and promotional overlay will offer the following benefits:

• The campaign is designed to highlight the community that exists through Trick or Treat for UNICEF, and to bring a message of inclusion and community to households around the nation that are desperate for the positive family-centric messaging that Wonderama and UNICEF are uniquely suited to deliver.

• Wonderama is creating a local activation and grassroots promotional campaign through a partnership with the National Grange and their over 1500 family chapters across the U.S. for Trick-or -Treat for UNICEF partners and their communities.
• Omnichannel Marketing: This multicultural event and program cuts across multiple sectors: broadcast television, digital media, print, social media, and will feature exclusive (custom) Trick-or-Treat for UNICEF program content, and a Live Broadcast Parade Event in Times Square.

• This co-branded collaborative execution makes cores sponsors a part of Wonderama as our programming partner. We believe that through this annual partnership with the Times Square Alliance and One Times Square, our sponsor supporters become a part of meaningful, large-scale, initiatives for children around the world, that through Wonderama and Trick or Treat for UNICEF can be accessed in every local community across America.

BIGGEST HALLOWEEN PARADE IN HISTORY I
Here are some Promotional Samples from our 2021 Campaign:

SUBMERGE PIER 84 Hudson River Exhibitors
Next Post: What to Expect this Flu Season