The Race for 5G Supremacy: Why China Is Surging, Where Millennials Struggle & How America Can Prevail By Paul Schulte

You are here: Home / Public Service / Politics and Government / The Race for 5G Supremacy: Why China Is Surging, Where Millennials Struggle & How America Can Prevail By Paul Schulte

Listen to “The Race for 5G Supremacy: Why China Is Surging, Where Millennials Struggle, & How America Can Prevail By Paul Schulte” on Spreaker. 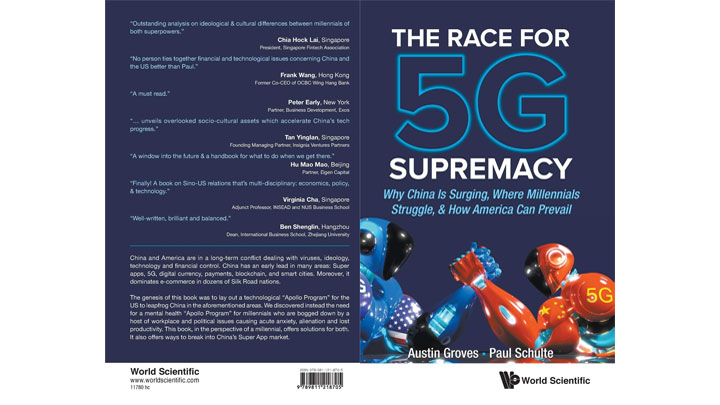 for more info, go to https://goodnewsplanet.com/what-does-peace-mean-to-paul-schulte/
“To get a clear picture of today’s winner in the tech space, this book is a must-read. It succinctly clarifies the differences in the current state of affairs in technology, social affairs and economic conditions between China and the US. It brings great case studies that will spark much-needed conversation.”

—Barbara Thole, Hong Kong, Founder, The Executive Forum “This book crackles with the familiar electricity of unspoken truths about China and its relationship with the US. Its many keen observations and insights surge forward at an irrepressible pace, as if mirroring the rapid change it is describing. It is a prophetic window into the future and a sound handbook for what to do when we get there.”

—Hu Maomao, Beijing, Partner, Eigen Capital
China is surging in the tech race — and will continue to outperform the United States. The rising power has done exceptionally in Super Apps, bullet trains, 5G, electric vehicles, digital currency, smart cities, blockchain applications, and quantum communications in space, among others. Its payment platforms are increasingly adopted along the entire Silk Road. The genesis of this book was to discover an “Apollo Program” for the US to catch up in these areas, but we discovered a much deeper need for a social/mental health Apollo Program for millennials who are bogged down by a host of under-appreciated and intertwined issues which cause anxiety and alienation and lead to massive losses in workplace productivity. This book proposes two Apollo programs — one for tech and one for millennials — by a millennial. Strategies for cracking the highly competitive Chinese Super App e-commerce market are also revealed.

“Paul looks at how technology is shaping our world through two defining lenses. The first is the generational shift in the adoption of technology and the second is the geo-political machinations between China and the US. How this plays out will define the world we live in!”
—Rob Jesudason, Hong Kong, CIO, Serendipity Capital (former President of Block.one)

“No person can tie the sociological, political, financial and technical issues at hand better than Paul. He once again tells of revolutionary and evolutionary changes that can only be ignored at one’s peril. If you don’t think that Paul is accurate in his assessments, then reread this book 18 months from now.”
—Frank Wang, Hong Kong, Former Co-CEO of OCBC Wing Hang Bank

“This book offers insight into today’s most important issue: the tech race, and why the West is losing. Schulte’s unique position at the intersection of tech, mental health, and where East meets West gives him an unparalleled understanding of why the West is losing the tech race, and what to do about it. As a Western millennial living in China, I witness the accuracy of Paul’s thesis every day. My only hope is that all Western business and political leaders read this before it’s too late.”
—Corentin Trebaol, Paris, CEO, Aconia Group

“Amazon is changing not only our buying lives but, also, our managing models. Brian Dumaine takes us inside the enterprise to see exactly how Jeff Bezos and his legions are doing it, sourcing anything in sight by overnight or less. A game-changer, the company has become one of America’s most omnivorous and disruptive start-ups ever. Buy Bezonomics today.”
—Michael Useem, Professor and Director of the Wharton Leadership Center, University of Pennsylvania

“Perhaps the most valuable aspect of Schulte and Groves’ research is not just the emphasis they place on powerful novel technologies, but the way in which this technology is placed in conversation with larger cultural and policy challenges that stifle US progress in the international community. Millennials have experienced America in the midst of one of her greatest failures, and the need to remedy and rebuild this divisive generational rift is paramount for the success of her future.”
—Jason Kang, Cambridge, Mass, Fellow, Narang Labs, Harvard University

“Few people can bridge the east and the west, the millennials and the older generations better than Paul Schulte. Well-written, brilliant and balanced, this book offers a timely insight into the frontiers of technology and the two leading countries: US and China in their quest for global leadership in the age of new technologies.”
—Ben Shenglin, Hangzhou, Professor & Dean, International Business School & Academy of Internet Finance, Zhejiang University

Paul Schulte first went to China as an equity analyst with Credit Suisse in 1992. He has analyzed seven five-year plans and has conducted research on Chinese equities for over 25 years having worked with Barings, Lehman, Nomura and China Construction Bank Intl. in Hong Kong. He has also been teaching millennial graduate students on five continents since 1999. He has written three books on China’s technological rise and has taught in China at Tsinghua, Fudan and Zhejiang universities. He also worked at the White House National Security Council, the House of Representatives, and the International Trade Commission. He was also an advisor to the Indonesian Minister of Finance in the 1980s.

LIFE IS SHORT, SO LIVE IT.
Next Post: What Does Peace Mean to Paul Schulte?