You are here: Home / All We Need Is Love / The Samuel Waxman Cancer Research Foundation’s Collaborating For a Cure Dinner 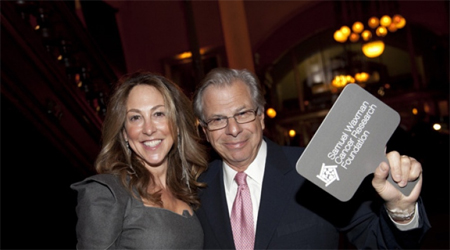 The 14th Annual Collaborating For a Cure dinner and auction was yet another great success for the Samuel Waxman Cancer Research Foundation (SWCRF). The event took place at the New York City landmark Park Avenue Armory on Thursday, November 17, 2011 at 6:30PM, and was headlined by singer-songwriter Kid Rock. Performing fan-favorite hits, Kid Rock brought the crowd to its feet with such songs as “All Summer Long,” “Cowboy,” and “Bawitdaba.”

Known affectionately by New Yorkers as “The Waxman,” the yearly fête is considered to be among the top annual fundraising events in New York City. SWCRF Board Chairman Michael Nierenberg introduced the man of the evening, Dr. Samuel Waxman who thanked guests, as well as the Foundation team, for continuing to support the breakthrough work of the SWCRF, “I hope you feel you saved one life and saved the world by collaborating with us for a cure.”

The dinner, auction and concert was attended by more than 1,100 corporate executives, board members, and their guests. The 14th Annual Waxman benefit raised more than $3 million to support the Foundation’s research efforts to produce a cure for cancer, reprogramming cancer cells to deliver tailored, minimally toxic treatments to patients. The scientists who are funded by the SWCRF have made significant breakthroughs in cancer research, including identifying pathways to deliver drugs and novel therapies to treat cancer.

The evening’s live auction offered guests the opportunity to bid on exclusive items such as a two Yellow Lab puppies for $13,000 each, to meet Kid Rock and take home his autographed guitar for $19,000, a trip for seven to the world famous Golden Eye Resort in Jamaica for $100,000, a week stay at a private ocean front villa in Anguilla with private jet service for $60,000, a five night stay of the ultimate luxury aboard a Private Yacht for $150,000, a fully stocked Viking wine refrigerator with 54 bottles of collectible wines from around the world for $15,000, a stellar wine tasting for 20 at the winner’s home – wines from Palm Bay International, catered by Restaurant Associates and décor from byROBIN for $10,000, a golf outing at Hampton Hills Country Club for $21,000, dinner for four with Petra Nemcova at Lavo for $11,000, two private wine tastings for 25 at Italian Wine Merchants for $55,000 each, “City of Dreams” original by Peter Tunney for $30,000, “Heaven on Earth” limited edition print by Peter Lik for $25,000, private four-course dinner for 16 at L’Artusi for $25,000 and a private villa in Bermuda for six with jet service from Flight Options LLC for $40,000. The live auction was led by Courtney Booth of Sotheby’s Auction House. Auction items are currently still available for bidding on Charity Buzz until November 30th, 2011.

The Samuel Waxman Cancer Research Foundation is an international organization that is a pioneer in cancer research. The Foundation’s focus is to reprogram cancer cells to deliver tailored, minimally toxic treatments to patients. Unlike other organizations, the Waxman Foundation supports novel treatments for many different cancer indications including blood, brain, breast, liver, lung, melanoma, and pancreatic. The Foundation sponsors research that spans the spectrum of cancer—from children to adults; from men to women; and from those who are newly diagnosed to those more advanced. Through its collaborative group of world-class scientists, the Institute Without Walls, investigators share information and tools to speed the pace of cancer research. Since its inception in 1976, the Foundation has awarded more than $75 million to support the work of more than 175 researchers across three continents.