You are here: Home / Communities / Asia / The Silk Road (Painting By Harry Bismuth) 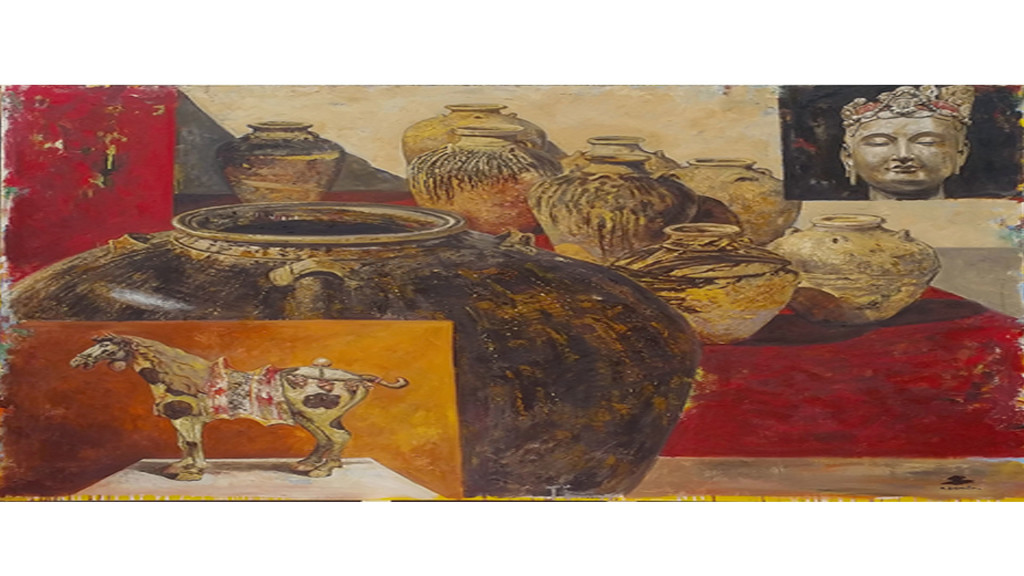 The Silk Road, actually not one road but a network of trade routes, from its birth before Christ, through its formal establishment during the Han Dynasty (206 B.C. E. to 220 C.E.), its height in the Tang Dynasty (618 C.E. to 907 C.E.), and its slow disappearance following the end of the Mongol Empire (1206 C.E. to 1368 C.E.), has played a unique role in trade, politics, religion, and culture, stretching far beyond the bounds of Asia itself. It has had a profound effect on the development of civilizations on both sides of the continent and its story is not over.

Buddhism became the first large-scale missionary movement in the history of world religion. Brought from India, it expanded with the establishment of monasteries along the Silk Road. These monasteries afforded merchants and travelers places to stay as they traversed from place to place. Other religions also spread along the trade route including Christianity, Islam, Judaism, Manichaeism, and Zoroastrianism.

China’s search for a breed of large, strong horses – replacing their pony-like horses – capable of carrying armor-clad men into battle was instrumental in the formal establishment of the Silk Road during the Han Dynasty. The success of the trade routes led to the necessity of policing it to thwart the bandits who came to plunder the caravans of goods traversing it. This was partially overcome by building forts and defensive walls, including sections of the Great Wall, along part of the route. Settlements were established as well though mostly in the oasis areas. By the time of the Tang Dynasty, which was known for its internal stability, the use of the horse had expanded beyond the military to that of commerce, entertainment, and sport, including polo, which though referred to as the “emperor of games” and the “sport of kings,” was played not only by royalty but by officials and the upper classes, by men and women alike. After the Tang Dynasty, the traffic on the road subsided as neighboring states again plundered the caravans.

The demise of the Silk Road owes much, too, to the development of the silk route by sea. It was becoming easier and safer to transport goods by water rather than overland. Ships had become stronger and more reliable, and the route passed promising new markets in Southern Asia. Storage jars made in China and Vietnam such as the sampling here of 8 of the 570 found on the wreck of the San Diego, a Spanish galleon converted to a cargo ship, contained preserved food, grain, and fresh water.

Such was the Silk Road and such is Bismuth’s painting of its history and culture.

The head of the Bodhisattva with her beautiful expression and the remaining fragment of her sumptuously ornamented diadem was found in the ruins of Longxingsi, “The Temple of the Dragon Awakening,” in the Shandong province. It is from the Northern Qi dynasty (550 C.E. to 577 C.E.).

The horse is made of terracotta and is from the Tang Dynasty. It was during this dynasty that China reached its apex.

Thus, united herein in Henry Bismuth’s Silk Road are unique segments of its history. While each of the images represents the then, together the whole they create renders an assemblage linking centuries and cultures into the present tense. This is what Bismuth intends. This is his goal. . . to revitalize, to transform, to make us go beyond our conventional thinking, to explore, to see. . . to “link world’s neighborhoods.”